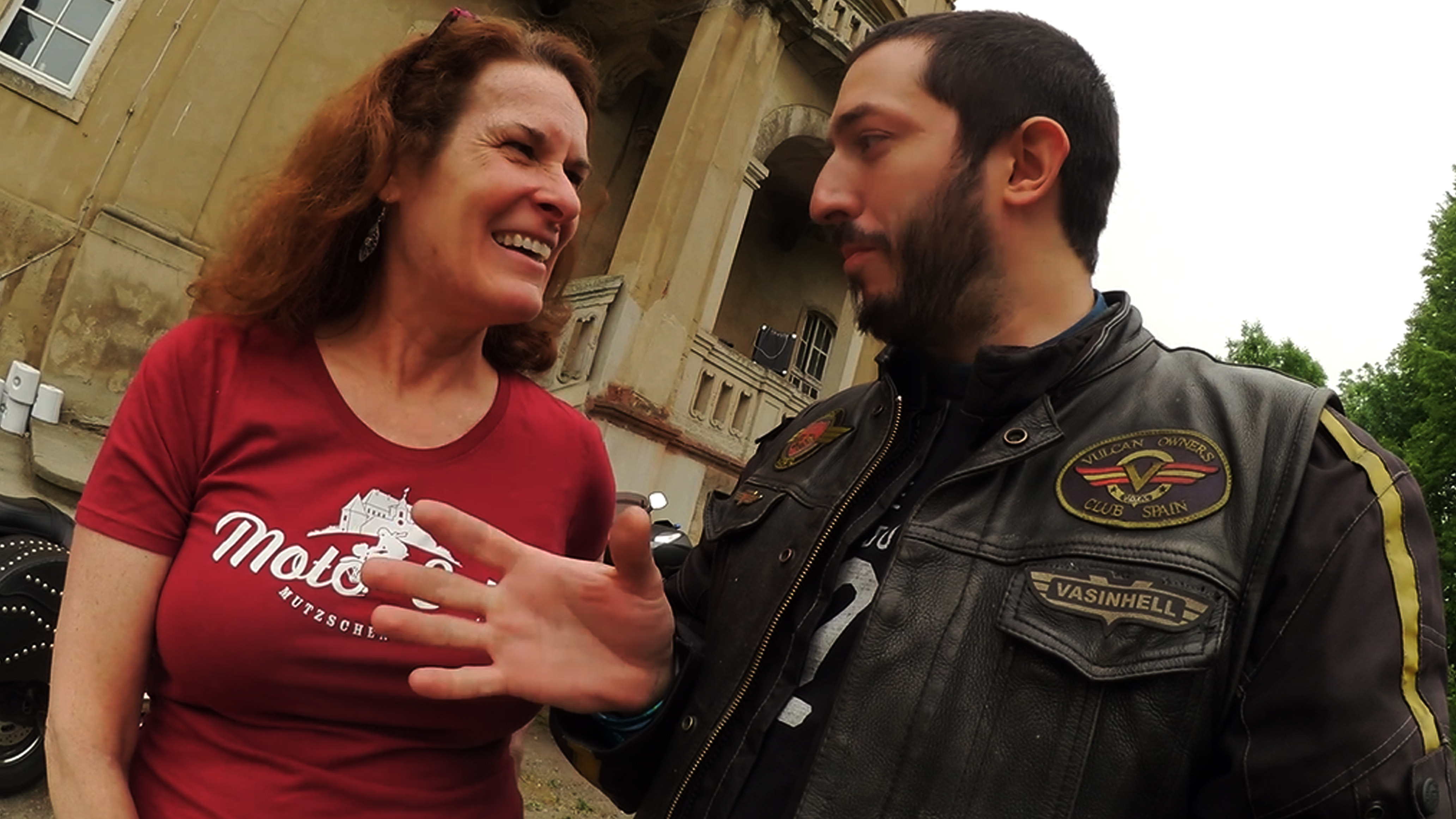 Early in the morning, after walking Jasper around the vineyards with Stefan, we set off to a new location in Germany. My friend Karsten told me during the VRA Switzerland meeting there was another Vulcan meeting in Germany this weekend. I must say I wasn’t expecting to go somewhere specific as I couldn’t find information on Vulcan rallies for the next two weeks. My lack of German makes surfing their forums very difficult for me.

Karsten was going to check if I could make the registration for the event. Like the other ones I have already booked, the deadline was set by the end of April. Some of them, even in March. As I didn’t want to show up unattended, I was looking for a place in middle Germany to stay for two days. This way I would be halfway there is there was any room left I could use in the event.

As I was sitting on a motorcycle, another friend called me. Stefan and Mely, Serbian born, moved to Röthenbach an der Pegnitz some decades ago. I met them back in 2017 while attending the Slovenian Vulcan Rally. Actually, I met the four of them there, including Stefan and Karsten, who kindly lent me his motorcycle for Saturday’s ride. But let’s go back to the story I was telling.

Stefan called me and invited me home. The timing was perfect and so was the weather. As strange as it may look, in comparison to the “no speed limit” Germany has in most of its highways, driving cross-country on small roads takes forever. Even the small cities have traffic chaos around rush hours and the hot weather doesn’t help at all. I always drive with a full closed helmet and it is very frustrating when you feel the sweat soaking it all. Although I feel like taking it off, I think I would never drive without it. The helmet is a “must wear” and I always preferred the full helmet type due to safety reasons. Try not to buy cheap helmets guys!

I got there around six o’clock in the afternoon. Mely and Stefan were already waiting for me. And so was their dog, Esta. After a quick shower, we set the table in the garden while Stefan was preparing the grill. Just before starting to cook, I received a called from a friend in Pamplona. José Antonio was about to start another journey with his Vespa up to Mongolia. Before I started mine, I contact him to have some help with Visa requirements such as types, prices and so on. He called me to ask me if I had any news about my Visa because he was having a tremendous delay on his. It turned out that the company we both used had already a lot of complaints to the Police Department and was marked as a fraudulent business. In my case, I had left my passport only two weeks ago and I was told that my Russian Visa was going to take at least three more weeks. My plan was to get the Mongolian and the Chinese Visa as well. I did not want to worry too much at that moment as it was still too early for me to complain about it. Some delays were already taken into account as the World Cup Championship was going to be held in Russia. Unfortunately for José Antonio, he had quite a few sponsors and he had waited for more than two months now. Visa issues apart, we talked a little about our journey plans and the possibility to meet us somewhere close to the Russian border.

Going back to the dinner table, I got a message from Karsten telling me I could join the Vulcanier Germany meeting in two days if I wanted, and invited me home the next day so we could ride there together. I needed to take a big detour to do so as I was closer to Dresde than Frankfurt, but did it anyway. I think the best part of this journey is sharing some moments with people, old friends or new, as the daily rush, long distances or living in different countries always reduces the time you spend with them.

My GPS base charger was not working when I started my trip and fixing it was the first thing Karsten wanted to do as soon as I got to his home. After some cable cutting and a couple of electrical terminals added, the power was back on. For some reason, it was connected to an unpowered cable from the key contact. Back to the apartment, we had the grill prepared. That’s three days in a row now and I was going to spend about 3 weeks in Germany!

We woke up the next day under the shiny morning sun, had breakfast and left. The calculated distance to the destination was about four hundred kilometers on small roads. The peculiarity of this event is that it is celebrated during Father’s day weekend and instead of being held from Friday to Sunday, it began on Thursday and ended on Saturday so everyone could be with their loved ones. During these days, you can find groups of men walking on the side of the road pulling some self-made wheelbarrow full of alcohol. They just drink and walk, which sometimes is very dangerous as they walk on the road. We found four different groups before the rain hit us about eighty kilometers from the meeting point.

The Vulcanier Germany party was like a large family reunion. At least, that is the feeling I had there. I met Mely and Stefan again and everyone else was so welcoming and kind. Although most of them do not speak English, they tried their best to have small chats with me. Saturday’s ride had its rest stop at Moto Soul Resort, Mutzschen. It is a place run by a Canadian woman called Debora who found this place and turned into a motorcycle meeting point with a restaurant and some train wagons as private rooms to spend the night. Hopefully, in a couple of years, we can go back and see the Hotel and Camping area finished.

Back to our camping, the party continued until late in the evening. In between, Django, one of the organizers, rewarded some of the guests and myself. I received the rally t-shirt for free for being the “attendee longest-shortest ride”.

Can you guess what they prepared for a late dinner? That’s correct, the grill!