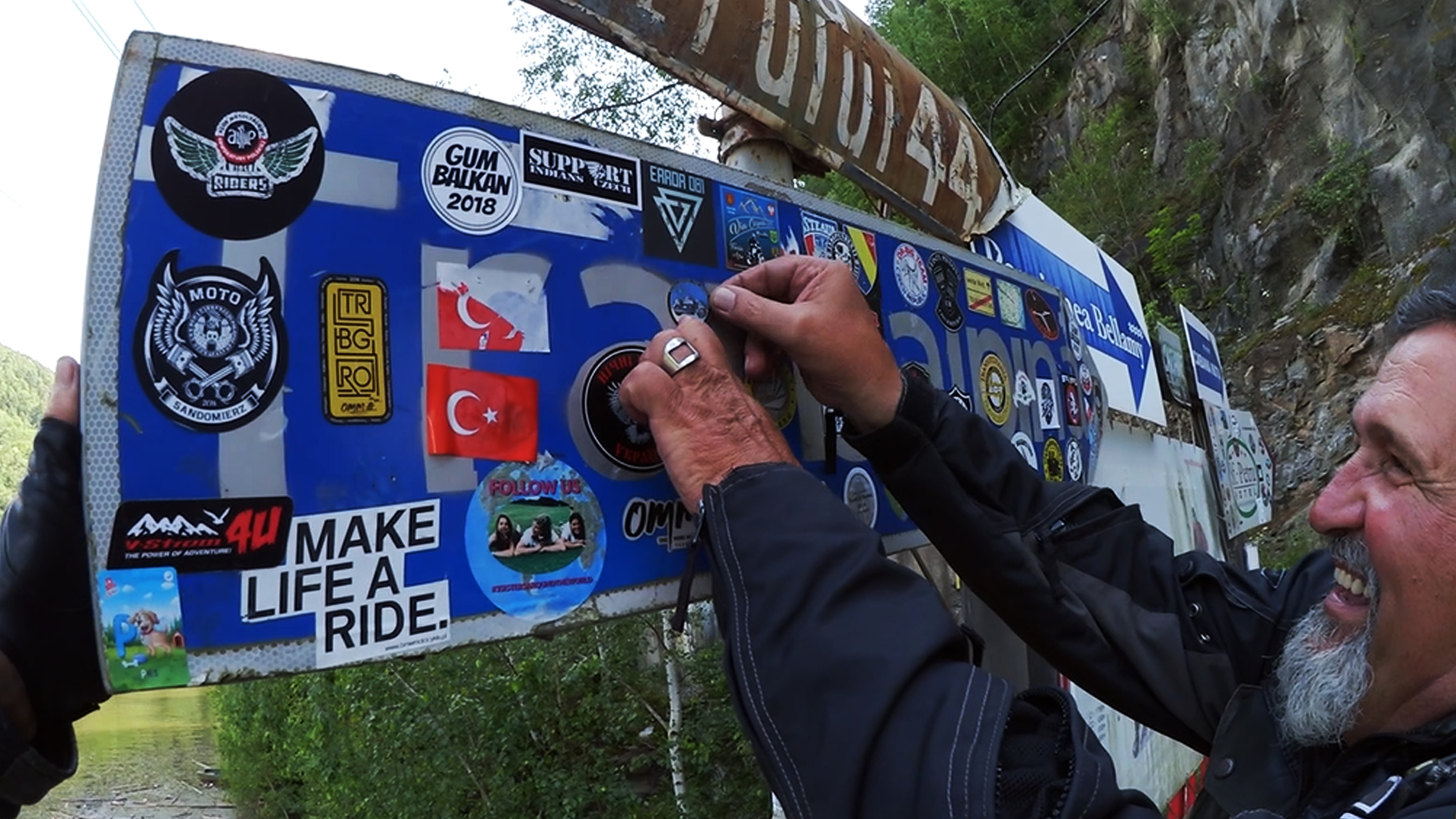 It’s time to leave Serbia behind. During my stay in Kragujevac, Csibi, from Romania, contacted me to offer me a spare drive belt of his old VN2000. I just needed to meet him in order to put it on. The ride went quite well up to the border crossing in Vatin, Serbia, where there was almost no cars waiting and some nice police officers. While both of them were intrigued by my journey, the woman officer recommended me not to fill the tank up until I was somewhere near Timișoara. It seems the quality of the fuel is not so good outside big cities. I was not sure what to do because I thought I had fuel enough to get to Cenad. I didn’t.

As I was driving out the main road, I wasn’t going towards Timișoara. After crossing the border the reserve light turned on. I was able to do seventy kilometers before the bike started to struggle. I drove around fifteen kilometers with the engine stopping and restarting itself. She was running out of fuel. I was terrified to be left without fuel there. I entered Cenei and found myself behind a van with a french plate. I stopped them thinking they were tourists and they could probably have some spare fuel, The van was driven by a Romanian guy. I could make him understand I need fuel saying repetitively “benzine”. Luckily for me, he told me there was one just five hundred meters in the opposite direction I was going to follow. And that’s how you save the day! I filled up the tank with 20,5L of a total of 21L capacity. Yes, I was almost meant to be left behind on the road.

With all this, it took me a little more to arrive in Cenad. Csibi was waiting for me and took me home once I arrived. Crina, his wife, was waiting for us with some refreshing drinks as that day was really hot. I met Crina and Csibi back in the International held in Denmark in 2017. Romania was a country I was willing to visit and as I saw them around I thought it was a great opportunity to finally get close to their club. I was already looking forward to their meeting but they just told me to go whenever I wanted, there was going to be a party waiting for me anyways. We haven’t seen each other since then.

I was surprised by how many word or phrases Crina could say in Spanish. She told me that most of the TV soaps were issued in Romania in Spanish and that she learned from them. I think that is not the best school but she did learn quite a few things. After refreshing ourselves a little, Csibi started to pull out some tools to take the wheel apart and change the drive belt. We had to ask for some tools to another Romanian member but after a couple of hours, everything was changed. Even the rear pulley was ok.

We left early the next morning as we were going to meet people on the way to the meeting point. Our first stop was in Arad, at Otilia and Marcel’s house. Some Romanian members were already there and others were on their way.  Once we were all together, we continued to our next destination: Deva’s Castle. With all the bikes parked down the road, we went up to visit the castle. While going up and down the stairs, we found Mirel, a Romanian member who had lived in Spain for a bunch of years. He had driven from Marcel´s house on small roads and ended up on the other side of the castle after driving through the woods.

One of the main motorcycle road attractions is the Transalpina, located in the Parâng Mountains, in the Southern Carpathians of Romania, being one of the highest roads of the Carpathian Mountains. It connects Novaci, on the south, with Sebeş, in the north. The landmark is just breathtaking. Green everywhere. Donkeys, sheep, and cows walking aside while taking one curve after another.

At the meeting point, we danced and laughed all night long. I was surprised by Crina again when she asked me to put a Spanish song named “Mentirosa” from “Ráfaga”, an Argentinian band. It seems this song was very popular in Romania, especially in TV soaps. Marcel also caught my attention when asking for a “Paulina Rubio” song he had in his mind back in the days when he was in Mexico for holidays. It is very unusual to see a big, long-haired, metal lover guy singing a Latin song of this kind.

On Saturday we went to Gura Sohodol and later to Târgu Jiu to visit some of the monuments made by Constantin Brâncuși. Although being Romanian, it developed and became known in Paris. He is considered one of the great sculptors of the twentieth century. There are three sculptures you can find in this city: The Table of silence, The Door of the kiss, and The Infinity Column, where the group picture was taken.

After returning to the hostel for dinner, I moved with part of the group to a biker festival nearby organized by “Slow Riders”.

Episode 23 – From Romania to Bulgaria