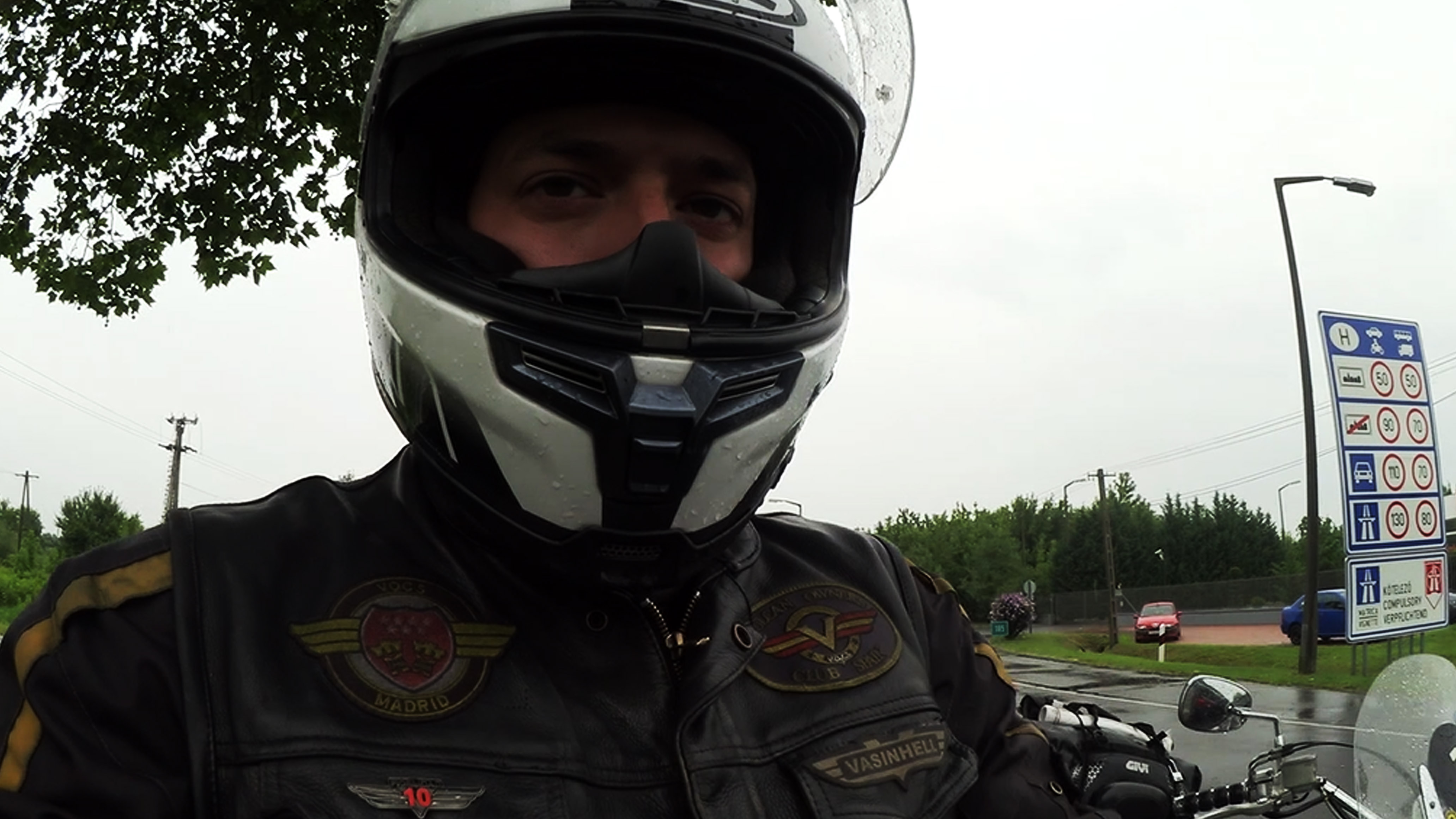 I left the camping area around eleven o’clock with the company of Marian and his son Mike. We drove together as they live close to the border to Hungary, which is my next destination. I contacted my friend Gazsi on our way south. My plan was to stop at Budapest as it was in the middle between the Slovakian party spot and Kragujevac, Serbia. Unfortunately, Gazsi was not available but he managed to set something up for me and gave me an address in Budapest where I should go.

I arrived at Jutka and István’s house. I didn’t know exactly where I was until a month later when I was told Isi was one of the vice presidents of the Hungarian chapter. None of them speaks English, but Isi offered me to show me around. We hopped in the car and he took me to the Citadelle, the Fisherman’s Bastion, and later to the Heroes’ Square. There is a monument featuring the Seven Chieftains of the Magyars and other important Hungarian national leaders, as well as the Memorial Stone of Heroes. Behind it, there is a bridge which takes you to a small all-in-one reconstruction of Vajdahunyad Castle, as part of the Millennial Exhibition which celebrated the 1,000 years of Hungary since the Hungarian Conquest of the Carpathian Basin in 895. The castle was designed to feature copies of several landmark buildings from different parts the Kingdom of Hungary, especially the Hunyad Castle in Transylvania, now in Romania. Our last stop was a viewpoint where we could clearly see the old cities: Buda – Pest.

Early in the morning, the first thing I had to do was going to a post office to send a helmet visor to Helmuth. I accidentally kept it while being in Vienna and forgot to give it to him during the weekend. István took me to an office nearby and everything was quickly solved. Time to continue to Serbia.

The rain made its appearance and accompanied me a little more after the border. I must say the border crossing with Serbia was going to be my first long autocratic experience between countries with the motorcycle. I was waiting under the rain for almost an hour and the cue wasn’t moving much. I didn’t really know what to do. Should I overtake all the cars and take the first position in the line?  When I finally got there, another motorcycle appeared and got to the first position. The guy even passed through the border control before me. I then asked the hard if I could do the same next time and he agreed with his head.

After running in some very large traffic jams in Belgrade, I arrived in Kragujevac around seven o’clock in the afternoon and went directly to see my friend Rajko. He received me in his house, along with his wife and son, Dusan, and a friend, Ivan. First thing first, before even thinking about looking for a place to stay, Rajko pulled out a bottle of Slivovitz.

When I found that my drive belt had a stone in Slovakia, the inner gears of the Vulcan family quickly started to move in perfect synchrony. I received a called from Stephanie and Hans telling me they were going to send to Rajko a spare belt for me to replace the damaged one. Unfortunately, DHL services were not on their best day at that moment and sent the package to the remitter instead. The package never arrived.

I met Rajko only once during the International Rally in Slovenia in 2013. Serbian economy is not so good at the moment and many people don’t have the chance to go outside the country. It’s been five years since we met, but we kept contact. It was now time to pay a visit to an old friend. Ivan took me around the city on the first day and I did my own motorcycle tour around the day after. I went to Gruža Lake in the morning and visited later the “Interrupted Flight” monument at Šumarice Memorial Park. I was very curious about this monument because I saw it many times in Rajko’s pictures. It’s a “V” shaped monument dedicated to the execution of an estimated 3,000 men and boys of the town by the German occupation forces on October 21, 1941, during World War II.

I found, both in Budapest and Kragujevac, a lot of remnants of the Second World War.