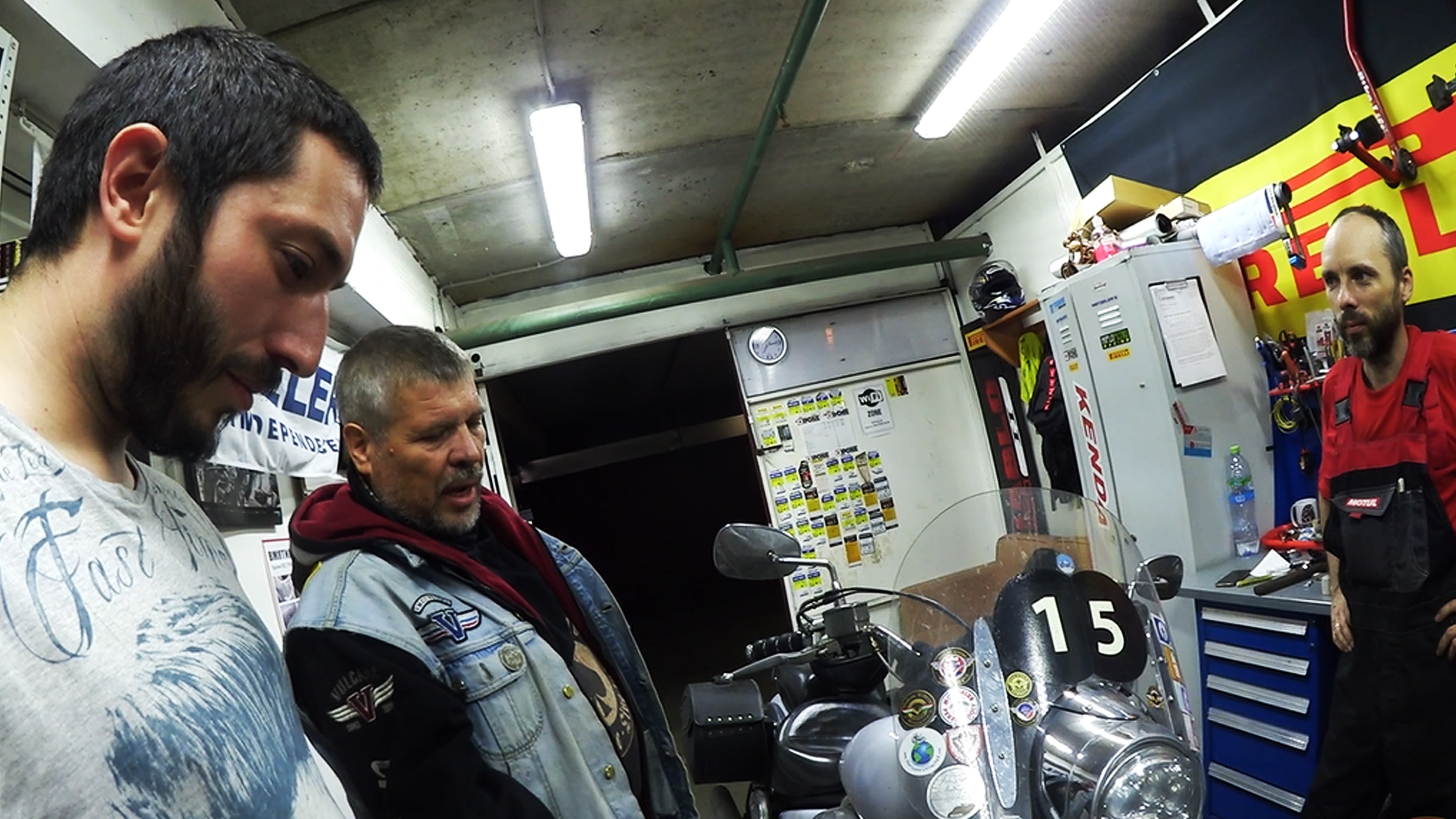 I left Yaroslavl right after breakfast and headed to Moscow. I was not in a hurry but I didn’t want to arrive too late as Сергей made an appointment for me at a tire dealer. Front tire needed to be changed before I continue any farther. After leaving my things at the hostel and looking for a bank to finally have some cash with me, I went to Артем’s garage. It was twenty kilometers away, on the other side of the city. The traffic jam at five o’clock was a hell of a nightmare. It took me a bit more than an hour to get there.  With cars everywhere my eyes could reach, it was barely impossible to move on with my motorcycle.

Артем had the tire prepared by the time Сергей came. Ok, not the Сергей I mentioned before, but another one. This confused me at that time as I thought another person was coming to the garage. Later on, the Сергей I knew appeared. I was told that being in Russia could be a problem regarding tire changes. My motorcycle is known for using some very specific dimensions which only a few brands provide. In this case, Артем got me an Avon tire as it was the only one matching my time table. It is the first time I have this brand on the bike. I know many of my friends from the Basque Country uses these tires but I had never felt the need to do so.

With all set, both Сергей took me to Bar 66 where they usually meet with the rest of Vulcans MCC members. Once I had the bar located, I went to the hostel to get Ainhoa. She had arrived in Moscow the day before and we were going to spend the week together around the city. Our first ride in Moscow was after nightfall and the city was just bright illuminated. After having dinner all together at Cafe 66, some of the members took us to Смотровая площадка на Воробьёвых горах, a viewpoint in front of Loujniki stadium which is well known as a biker meeting point.  The night’s ride finish line was set at Moscow Red Square. They were preparing a military marching band contest and they were trying the lights on Saint Basil’s Cathedral. The light play was incredible but unfortunately for both of us, we would be out of the city by the time the contest began.

Again, with Ainhoa by my side, we went out for a private self-made tour around the city peculiarities. AS in Saint Petersburg, visiting the Metro line was a must. The main attraction here is the frontier soldier with his dog which is in Ploshchad Revolyutsii station. This is one of the most famous stations of the Moscow Metro, named after Revolution Square, under which it is located. There are five dog sculptures in Moscow which are considered to give everyone who caresses their snout a lucky day. The station is also famous for the other socialist realism statues. There are a total of 76 sculptures.

Our steps led us to Moscow Kremlin, a fortified complex in the center of the city. The name “Kremlin” means “fortress inside a city”, and is often used to refer to the government of the Russian Federation. Cathedral Square is the heart of the Kremlin, and it is surrounded by six buildings, being three of them cathedrals. I must say I wasn’t too happy to find out that after paying the tickets you are not allowed to take pictures inside of them. Sometimes they make you feel guilty if you stare too much. I don’t quite understand this “no picture thing”, rather than make you paying their own souvenirs.

Another famous attraction in Moscow is Saint Basil’s Cathedral. The fun fact is that it is not its real name, but “Cathedral of the Intercession of the Most Holy Theotokos on the Moat” sounds too large to remember. In fact, the original building contained eight churches arranged around a ninth,. A tenth church was erected in 1588 over the grave of venerated local saint Vasily which later made people name this cathedral after him. This cathedral is now a museum and it was in Ainhoa’s to-do list. Unluckily, she felt a little bit disappointed afterward. I think it is normal when having great expectations for something that has been popularised over the years. Don’t get me wrong, it has some very nice things; the price is just not proportional.

The first hours of our third day were spent at the hostel. I had something to do and Ainoha wanted to recover a bit. Сергей contacted me and invited us to go for a ride to some other places which are outside the metropolitan area. He took us to Kolómenskoye, a 390-hectare scenic area near Moskva River. This area is so vast that walking around with the helmets and the jackets was quite a challenge. We got lost at some point and decided to turn around.  We were walking aimlessly and we were all craving for something to eat. Unexpectedly, Сергей led the way to a very uncommon place: Danilov Monastery. It is kind of a hidden place as it is the restaurant or the ecclesiastical building where the Patriarch, something similar to a Russian Pope, lives. Although it is located there, the restaurant is open to anybody who actually knows about its existence. It was a very pleasant and unexpected experience. The food was incredible but the amount we were served was just crazy.

By the time it was getting dark we were at Victory Park, walking around the various monuments and decorative tanks. It is an open-air museum dedicated to the Russian victory over Napoleon. The main Victory Monument standing 142 meters tall symbolizes 1,418 days and nights of the Great Patriotic War. At the foot of the obelisk, there is the statue of Saint George killing the snake, the symbol of evil. After a long walk around it, we stepped into Moscow International Business Center, also known as Moscow City Towers. This area includes 6 skyscrapers with a maximum height of 300 meters or more and Europe’s second-tallest building. From the highway, you can stop at a viewport and delight yourself with an amazing view of these buildings collection.

I spent my last day with Ainhoa at Izmailovo market, one of Moscow’s tourist-magnet bazaars. Full of thing you probably won’t need, you will find waves of people haggling prices. I really don’t like this kind of purchasing process as I will never be confident to think the price I paid was the right one. I saw people paying a third part of what it was originally noted. The worst part is that most of those products were already half the price compared to the ones you could find in the city center. Regardless of this, you can have a nice time seeing the building. Even if it looks like an old-colored Kremlin, it was built in 2001 as a recreational zone based on sketches from the 14th-17th centuries. Nevertheless, you can find St. Nicholas Church which is the tallest wooden church in Moscow. That is something!