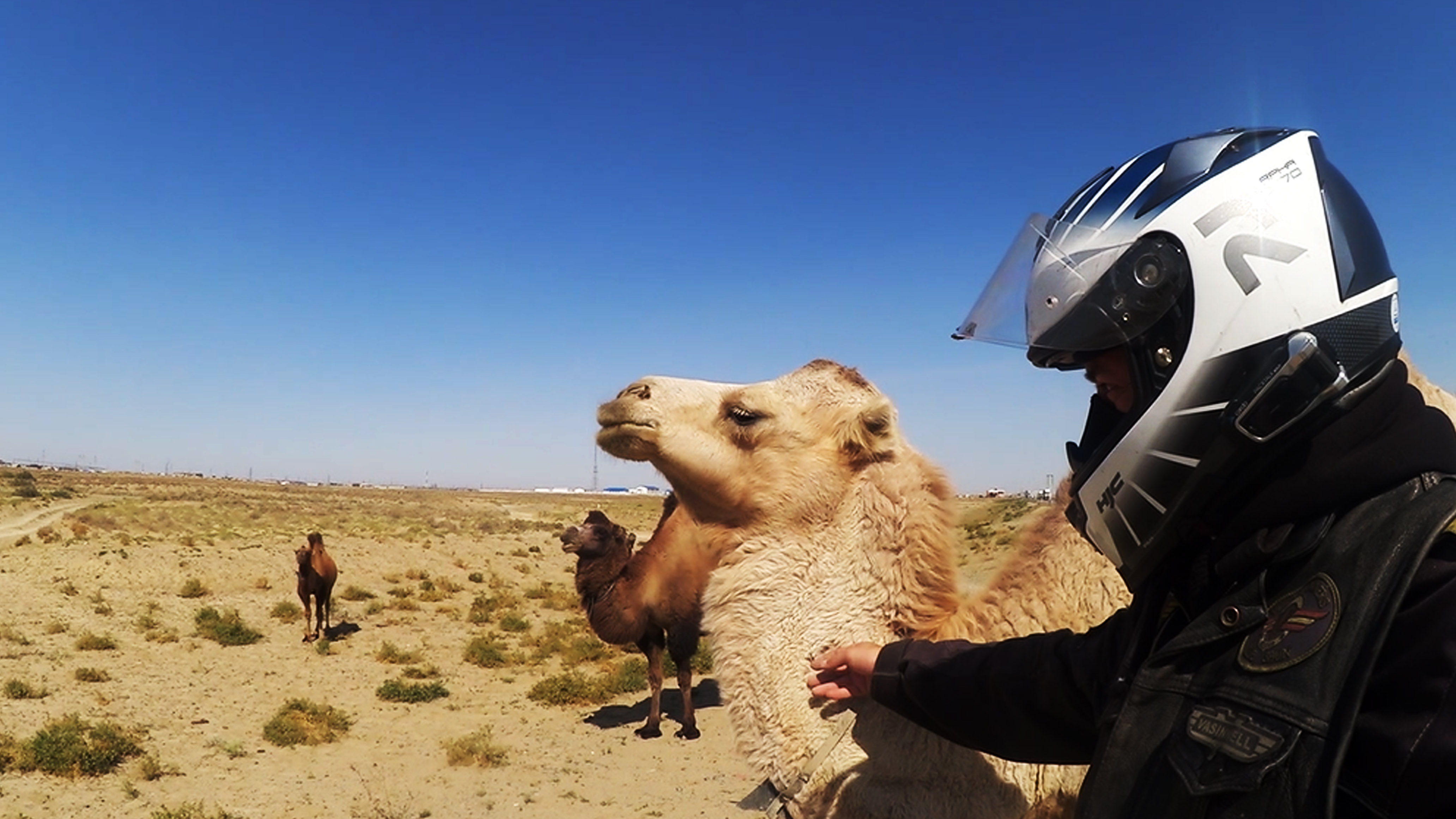 After fifteen hours on the road to do almost a thousand kilometers across the Kazakh desert, Evgenya and I made it to Aral by midnight. We stayed in a hostel near the road and shared the room with a third person who was already sleeping by the time we got there. We had dinner before we went to bed. I had some rice and “манты”, which looked like meat kinds of ravioli to me. We didn’t leave the room until eleven o’clock as our next destination, Baikonur, was just around the corner (220km).

Right after hopping on the road, we had to stop. I promised Evgenya, and myself, that I would stop if I ever saw a camel again. Last night it was dark and we were running out of time. Now, we had all day long to try to get close to these animals. Just six hundred meters ahead of the hostel we found a bunch of them. I can’t recall how much time we spent there, but it was most probably half an hour. There were camels and dromedaries as well. I couldn’t help to realize that most of them had their nose pierced, or a leash on their neck. Even one of them was leg cuffed. Naively, I thought these animals were living in freedom. At least, they look like wild animals from the road. Oh boy, I was so wrong. The biggest problem I see with them is that it is highly probable they could get hit by a car, like the one we saw yesterday.

On our way to Baikonur, I started noticing we were getting closer to civilization again. We crossed a couple of villages where there were people on the hard shoulder flashing us their products. Most of them were dry fish, which is a very common snack around here. We found as well two more bikers. One of them was just a local traveling from one village to another in some WW2 kind of looking motorcycle. I can’t even remember what was the brand name. We were resting on the side of the road and he came from the other hand and stopped next to us. Obviously, Evgenya did all the chatting with this guy as I don’t speak Russian.

Right before we arrived in Baikonur, we found Rudolph. He is an adventurous traveler completing his journey on a Jawa. What are the chances of finding Honza, from the Czech Republic, and Rudolph, from the Slovak Republic, in less than twenty-four hours? he explained a little bit about his trip. He was spending most of the night in his tent, on the roadside. If I’m not mistaken, his average speed was around fifty kilometers an hour. Sometimes it could get very tricky in Kazakhstan due to strong wind. I can’t even imagine how hard it could get. I gave Rudolph a patch and he gave us a signed picture from his journey. What a gift! Once we arrived in Baikonur, I researched a little bit more about his adventure and saw him changing the spokes of the tire. Unbelievable!

I had to stay in a hostel outside the city because I needed to be granted access to it first. By the end of the day, Evgenya contact did the magic. The first thing they did was taking me to a garage where I got my belt cover welded for good. I realized the day before that at some point the saddlebag got under it and started to break it. Now it was fixed! On the way back to the apartment we were staying in, we all got stuck for a couple of minutes in the elevator. I’m not so sure why, but it just disconnected from the power supply. After that, Evgenya and I decided the stairs were the best choice.

We spent the next day around the city, going around different open-air monuments. We were taken to visit the Cosmodrome Museum. For some reason, they charged me even more for asking for an English guided tour. I mean, what the hell? Anyways, we spent about four hours inside this space museum. The Cosmodrome is the world’s first and largest operational space launch facility, which has celebrated the 60th anniversary of the foundation in 2015. It is currently leased by the Kazakh Government to Russia and is managed jointly by the Roscosmos State Corporation and the Russian Aerospace Forces.

One of our last tourist checkpoints in the city was Yuri Gagarin  monument. Yuri was a Soviet pilot and cosmonaut and became the first human to journey into outer space. It is said that there is only one day during the year when you could take a front picture of him with the sun in-between his hands. Unfortunately, that day was not today.