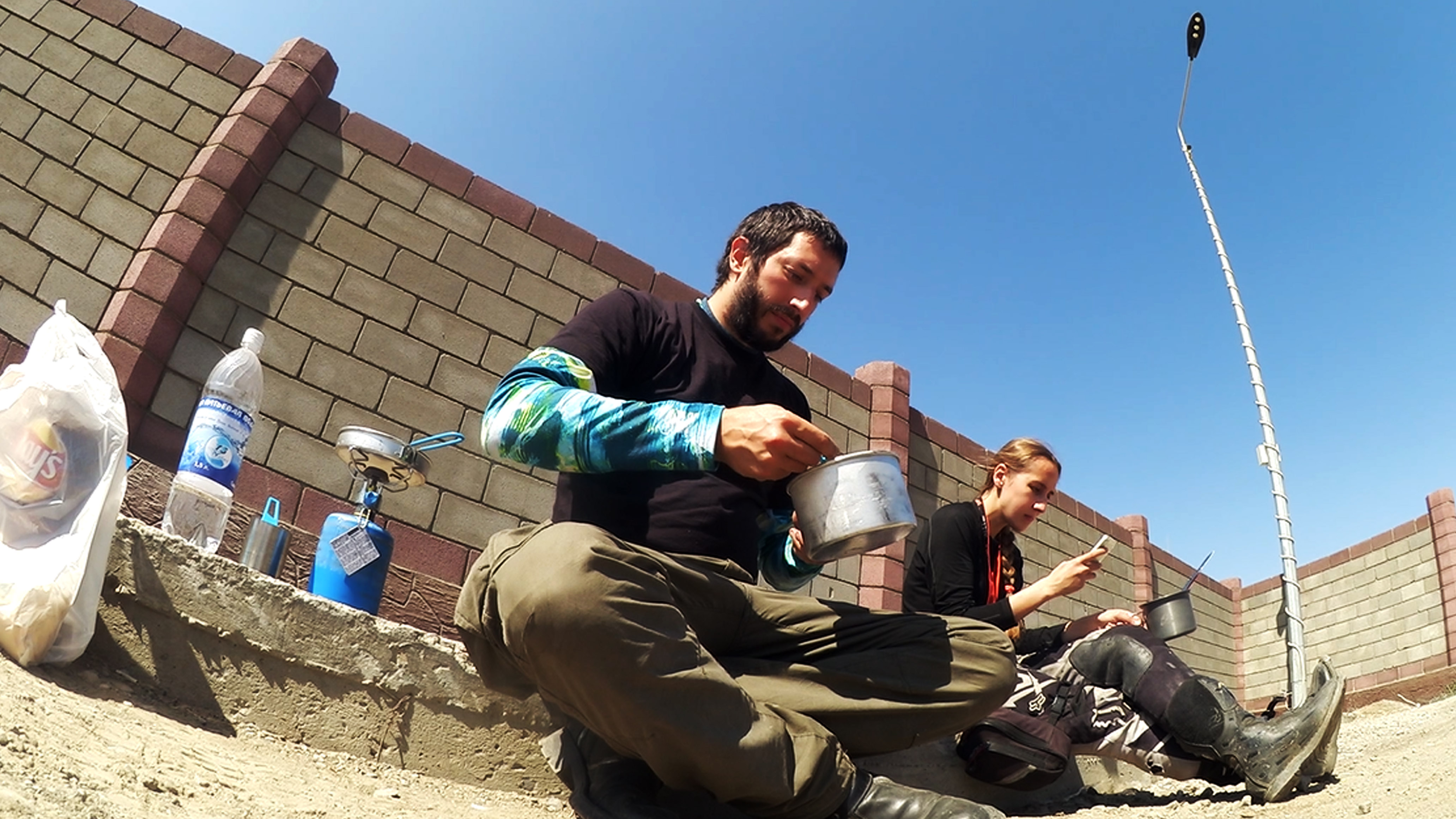 The sun rises and it is time to wake up. I slept at the hostel in Toretam so I went to Baikonur’s city entrance to wait for Evegnya to come. Today we are continuing to Shymkent which is about seven hundred kilometers South.  It is a long ride and it will probably take us all day. Our first stop would be the memorial to “Коркыт-ата” we were told about at the Cosmodrome Museum. It was not far, just seventy kilometers from Baikonur.

Korkyt is a well-known Turkic songwriter and composer of the 9th century. An architectural monument was built in 1980 in the Karmakchy district of the Kyzylorda region of Kazakhstan. Over the centuries, it has come to destruction. In 1997, a whole new complex with an amphitheater was created. When the wind blows, the commonly known as “Singing Pipes” starts to sound noticeable and all passing persons can hear the melody of the wind. Since 2006, the mausoleum has been hosting the International Festival “Korkyt and Music of the Great Steppe”.

Driving with Evgenya was a pleasant ride. I was following her so she could decide whether to go faster or not.  We were not in a hurry and the result was two motorcycles driving peacefully across the desert. We stopped half-way to Shymkent to have lunch. We were both looking for some quiet place to rest as people frequently approach to ask questions. It was very hot that day and even if we had parked the bikes behind a truck, the sun was so high that there was no shade at all. After a while, the truck driver came and chatted a little bit with us. They wanted to take some pictures with the motorcycles and gave us a melon afterward.  Before we continued any farther, Evgenya did some maintenance check on the chain.

There were no incidents on the road rather than stopping to refuel Evgenya’s bike with my jerrycan as there were not many gas stations at sight. That changed when we were about to arrive in Shymkent. A lot of truck drivers were flashing at us and I was the cause of it. My taillight was not working and the night was falling on us. Luckily we were not too far. I didn’t change positions with Evgenya to have her covering my back because of her taillight was very dim. We entered Shymkent and met a small group from АВТО – МОТО ФЕДЕРАЦИЯ ШЫМКЕНТ, a local motorcycle group Evgenya had contacted before. We were received by Олег, Сардор, Андрей, and Eлжан. They took us to the hostel and invited us for dinner. I told them about my electric problem and they assured me that could be fixed the next day at another’s member house.

We met Сардор the morning after as he offered to take us for a ride outside the city. The first place we went to was Akmeshit’s Cave, located sixty kilometers north. It is a sacred cave, it means “White Mosque” if translated from the Kazakh language, with a peculiar climate. It seems it is warmer here than outside, and cooler in spring. In addition, trees do not grow in the vicinity of the cave, but inside it, there is a small world, with its own ecosystem. It looks really unusual.

On the way back, we run into some road works.  The only available place we could use to drive through was the hard shoulder paved with loose stones. I was following Evgenya until she stopped to regain balance. When I tried to move again, my rear tire pulled all stones out and buried herself in.  My bike was left in a vertical position without the kickstand out. The motorcycle was so stuck that I needed the help of three more men to push the bike out. After that, I decided to drive the rest over dirt rather than stone. Once in the city, we stopped at Бәйдібек-би Park where there was a huge, and I mean really huge, amount of couples having their marriage photo session. It was insane. Everywhere my eyes went, there was a bride walking. When we left the place and there were dozens of cars waiting to access the parking area with even more brides on them.

My last stop before Evgenya and I go separate ways was Kirill’s house. As soon as I took the seat out, we saw the taillight cable cut. I had fix this cable already six years ago. It seems it couldn’t hold anymore. Kirill took care of it, cutting the end of all the cables and replacing them with new ones while Сардор brought us some “самса”, a savory meat pastry. he traditional Samsa is often baked in the tandoor, which is a special clay oven. The most common filling for traditional Samsa is a mixture of minced lamb and onions, but chicken, minced beef, and cheese varieties are also quite common from street vendors.

Once the bike was fixed, I had to say goodbye to Evgenya. She was continuing to Dushanbe through Uzbekistan. For the past days I tried to get a visa for this country but the time they needed to process my request would take ten days and I didn’t have enough time for that. Both the Spanish embassy in Russia and the Uzbek one in Spain were not replying my emails. Instead, I would drive across Kyrgyzstan and rejoin Evgenya in Tajikistan’s capital city in five days.

Олег invited me to spend my last night in town with them. There was another member of their club who had just bought a new bike and they were having dinner together to celebrate it. So, why not? Another opportunity to meet new friends around the globe.