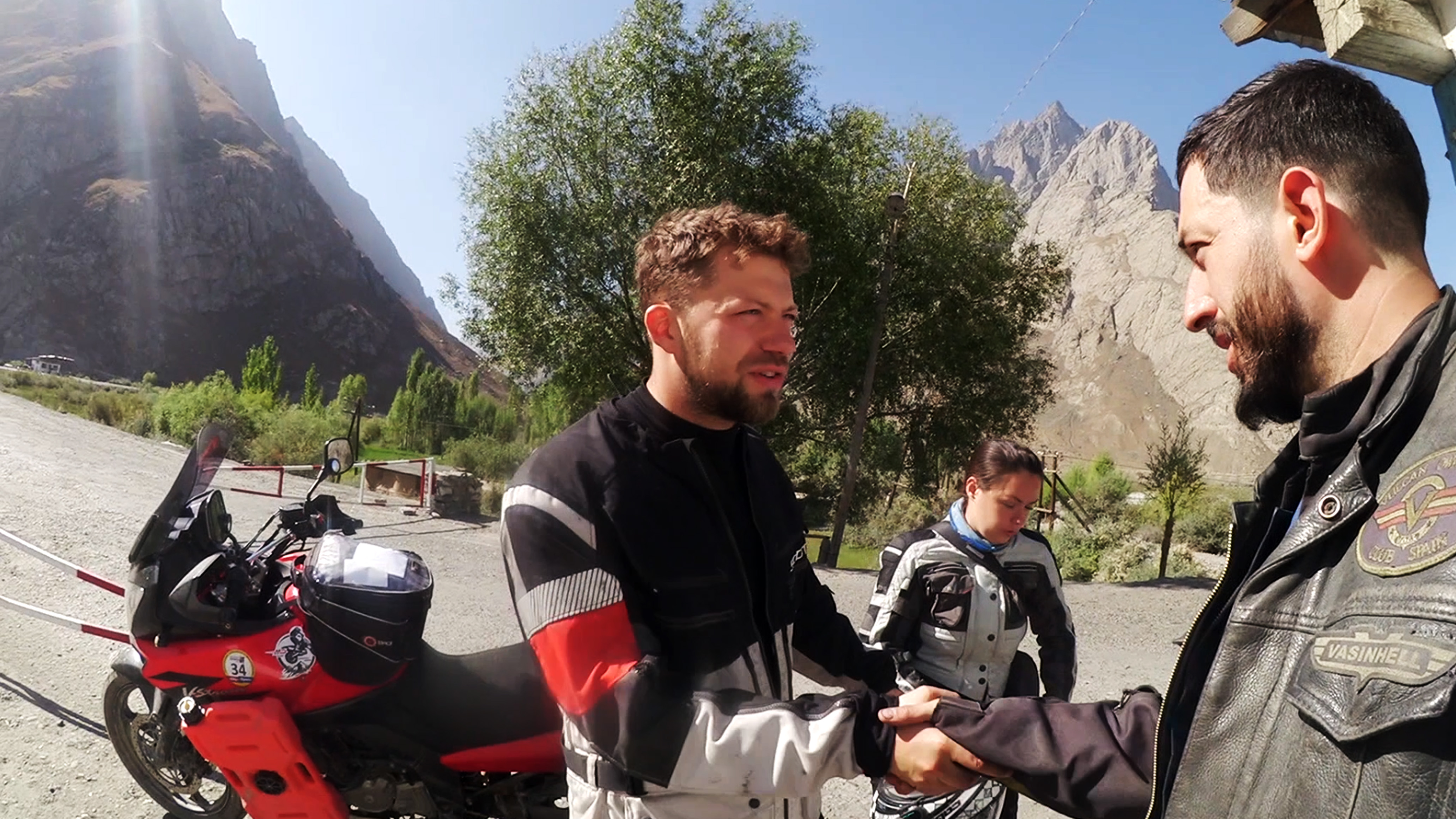 I woke up and I was still in the cave I pitch the tent the day before. The first thing I wanted to do before continuing any farther was checking the rear light panel on the bike. Even if I was not going to ride at night around here, it is always better to be seen. At the moment, none of the lights are working. I took off the seat and the battery cover. I did not have a current checker with me and after a while, it was not possible for me to find where the problem was. On the other hand, I found a new one. Because of the irregular roads I have been driving lately, the saddlebags had suffered a lot. They don’t have a third anchorage point and they are bouncing all the time. While riding on this countless potholes filled roads they have been hitting the drive belt cover on the left and the caliper on the right, having both of them unsewed in that area. My only solution at this point is using some stripes to wrap them up.

With no further checks to make, I continued my journey. I realized Dekh was not too far, just a couple of curves ahead. I was hoping to see Katerina and Pavel’s motorcycle somewhere from the road. I didn´t. Instead, I found them farther down the road as they caught me up when I was arriving at the next GBAO checkpoint after Rŭshan. We had a moment to chat and have some apples the officers gave us. Many people give you apples in this area and look very friendly. Katerina and Pavel told me a little bit about their adventures in Uzbekistan and how they almost depleted all the extra fuel cans they were carrying with them. I am carrying a ten liters jerrycan but they are driving with twenty-five liters extra. Unfortunately, they were quite in a hurry as they wanted to reach Bibi Fatima that day an that was about two hundred kilometers away. I followed them for a bunch of kilometers trying to keep up with them but I wanted to take some pictures and I was driving alone. That means I have to stop and take the pictures myself. I tried a couple of times to take the pictures while driving but doing so was close to a death sentence here.

Not too far from Khorugh, I found Elisée and Zack, both from California cycling around Asia. I had a nice chat with them and continued to town to buy some food for the evening. I took my time in the supermarket and when I came out they were already there buying some fruits in the market. I found Katerina and Pavel as well, right before they were preparing to leave. This would be the last time we would meet as they are continuing south while I would ride east to Murgab.

As I was in town, I tried to get some more local currency. Unfortunately, the bank was closed until two o’clock and it was midday by that time. I was not going to spend two more hours around just waiting for it and decided to continue. Just before leaving the city there is another GBAO control point. The last one before a large area of asphalt road. In most areas the asphalt was good. Don’t get me wrong, anything was better compared to the last three hundred kilometers. I sat down in the river shore about an hour away from Khorugh to have lunch. While I was at it, I tried to fill up one of the water bottles I had with me and the other one was taken by the river flow. Fortunately, it didn’t get that far and I could recover it in no time. Even dough it was hot and there was no shade to have coverage from, it was nice to feel the river breeze for a while.

I continued down the road and met some other travelers along the way. In this case, another couple composed of a girl from the United States and a guy from England. They met on the road and they are now sharing part of it together. I also had my first encounter with yaks, an animal I wasn’t expecting to find up here at all. In fact, I wasn’t even expecting to find camels in Kazakhstan either. That is the problem of not reading about the country you are about to enter. They didn’t look like they have much contact with humans and I couldn’t get too close to them as I did with camels.

I stopped at five o’clock, after driving about two hundred fifty kilometers. I spent ten hours on the road this time and I found a nice spot where the tent could be pitched. It was just thirty meters away from the road and had some wind coverage as the temperature was going down quickly. It is time to rest now and there is no need to continue farther because it could get dark very fast. I tried to get some more water but I couldn’t. The river was far down from my position but I had enough for the night. Let’s hope we get to the river level tomorrow.