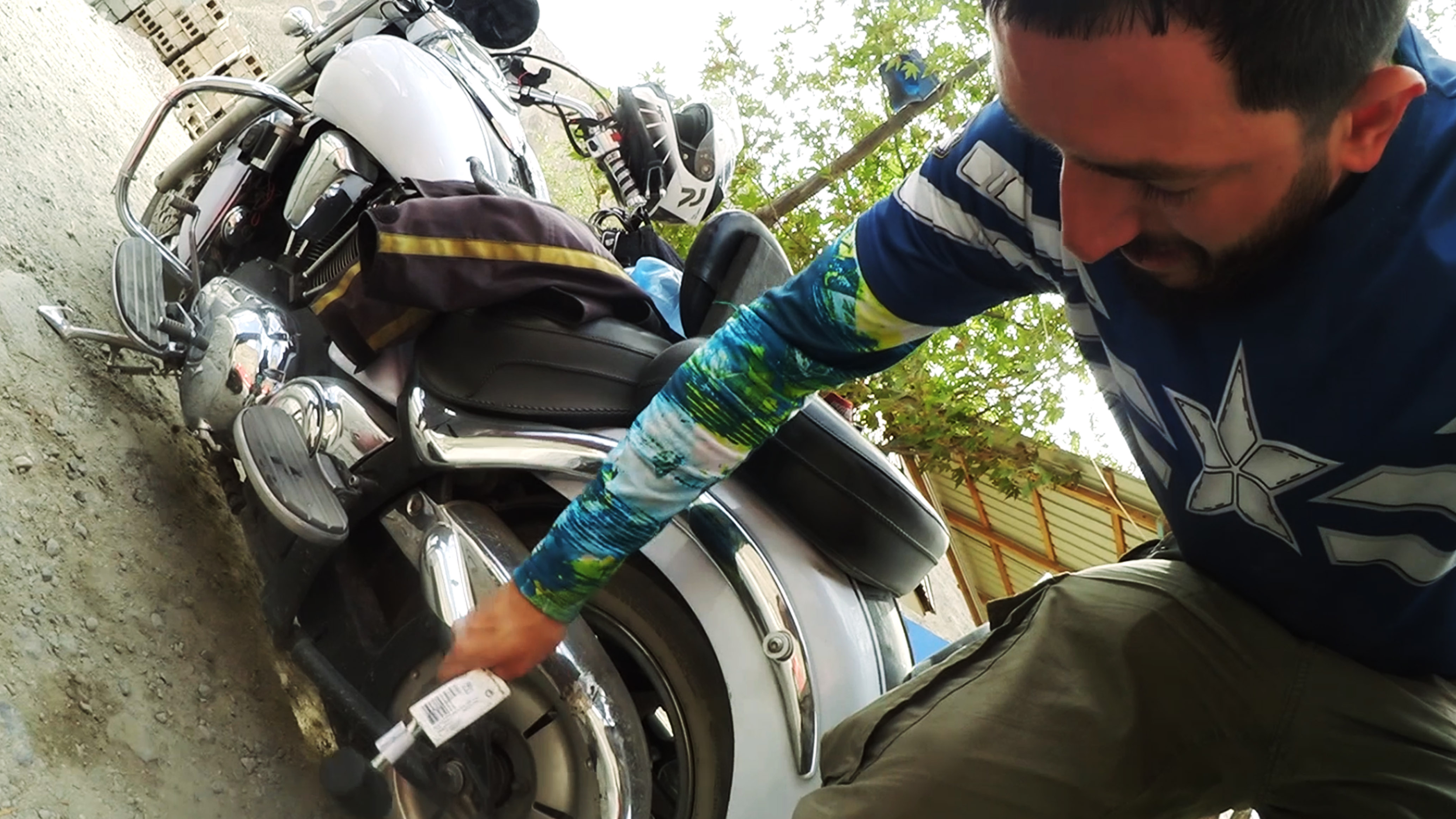 I woke up and found a message from Evgeniya saying they couldn’t make it yesterday. They had to stop about sixty kilometers from Kalaikhum due to the difficulties found on the road. They told me they were going to start again early so I made my calculations and took my time to have breakfast. As the night before I tried to upload a video to YouTube using my sim card’s data connection, I ran out of credit and went to a shop nearby to reactivate it. Needless to say, I couldn’t upload the video. I had found out that Tajikistan has some kind of YouTube restriction and I had to use GPS relocator system to let it think I’m somewhere else.

I left the hostel and sent a message to Evgeniya. There was a small gas station just two, or three, kilometers ahead. I would wait for them there and they could fuel up their bikes there. After an hour and a half, there was no sign of them and I decided to continue forward. The clock was ticking.

I was riding alongside Pyandzh River, following the natural borderline between Tajikistan and Afghanistan. For some reason, the road on the other side looked much better than the one I was in. There were small trails of asphalt here and there, mostly destroyed and full of rocks and dirt. Our average top speed was barely reaching thirty kilometers an hour and we met some large groups of trailer trucks which were difficult to overtake as they filled all my vision range with dirt and take all the road for themselves. The best part of this road was having the river so close. In some occasions, the road went down almost to the same level and it was possible to jump in it. It was very hot and it is a natural source of pure water. Aside from the road, waterfalls were other water sources you could easily find.

We run into a lot of small villages. Mostly kids were running towards me to salute me and raising their hand to high five them. I’ve been told some people accidentally broke these kids arms doing this. If you go too fast the impact is huge. I tried to high five the, only when driving under ten kilometers an hour, and avoided it completely if I was driving on a very irregular area. Safety first, for both.

I found a small rest area where truck drivers make their stop. Four kilometers later I had to go back there because I found out my rear axle was slipping out of its place. When I tried to fix the axle problem in Dushanbe I forgot to put the axle lock back in. After four hundred kilometers the axle was one inch out. I thought the best option here was driving back a little and ask the truck drivers for help. I didn’t have a wrench wide enough with me for the axle. I used a rubber hammer I had in my tent bag and everything was in place again.

Later on, I found a bunch of trucks parked aside from the road. I had seen some videos of other travelers and I thought that maybe the road was blocked. It was indeed. At least it was not an accident, but just a truck stuck in a sandy ramp. A lot of people were taking care of it already and after ten minutes everyone was back on the road.

Another control point passed, and another river cross to Afghanistan found before the next problem appeared. After thirty-five thousand kilometers, we finally have a flat tire. I was driving and feeling the fork a little too hard to turn while having the sensation of hitting the ground too much. We were indeed driving with a flat tire. I manage to drive about five hundred kilometers more before I found a small cave with a private beach next to the road. I had recently bought a repair kit in Shymkent but, unfortunately, not a compressor. I pulled everything out of the bike and pitched my tent in the cave first. I tried to move the bike to see where the hole was. The ground was a mixture of sand and dirt which made it very difficult to turn her around. After a few tries, I was not able to find the hole. As many trucks were going around, I would just wait for one to appear.

After half an hour, a car appeared and stopped. He did not have a compressor but a hand pump for bicycles. He helped me find the hole, fix it and pump the tire. Джонни also recommended me to continue less than three kilometers farther as there was a village with some homestays. After thinking about it for a while, it was getting dark and I had everything prepared in the cave already. I said goodbye to Джонни making a terrible mistake without noticing. As I was recording with my right hand, I offered my left hand and didn’t realize it isn’t right in their culture. The left hand is considered the “impure hand” as it is traditionally used for personal cleanliness. Luckily, I quickly realized that as soon as he politely refused to shake hands.

Just ten minutes after Джонни left, the sun went down and darkness covered it all. I tried to have a swim in the river but I was barely seeing where my feet were supporting. Right when I was crossing the road, a motorcycle passed by. Those were Katerina and Pavel.