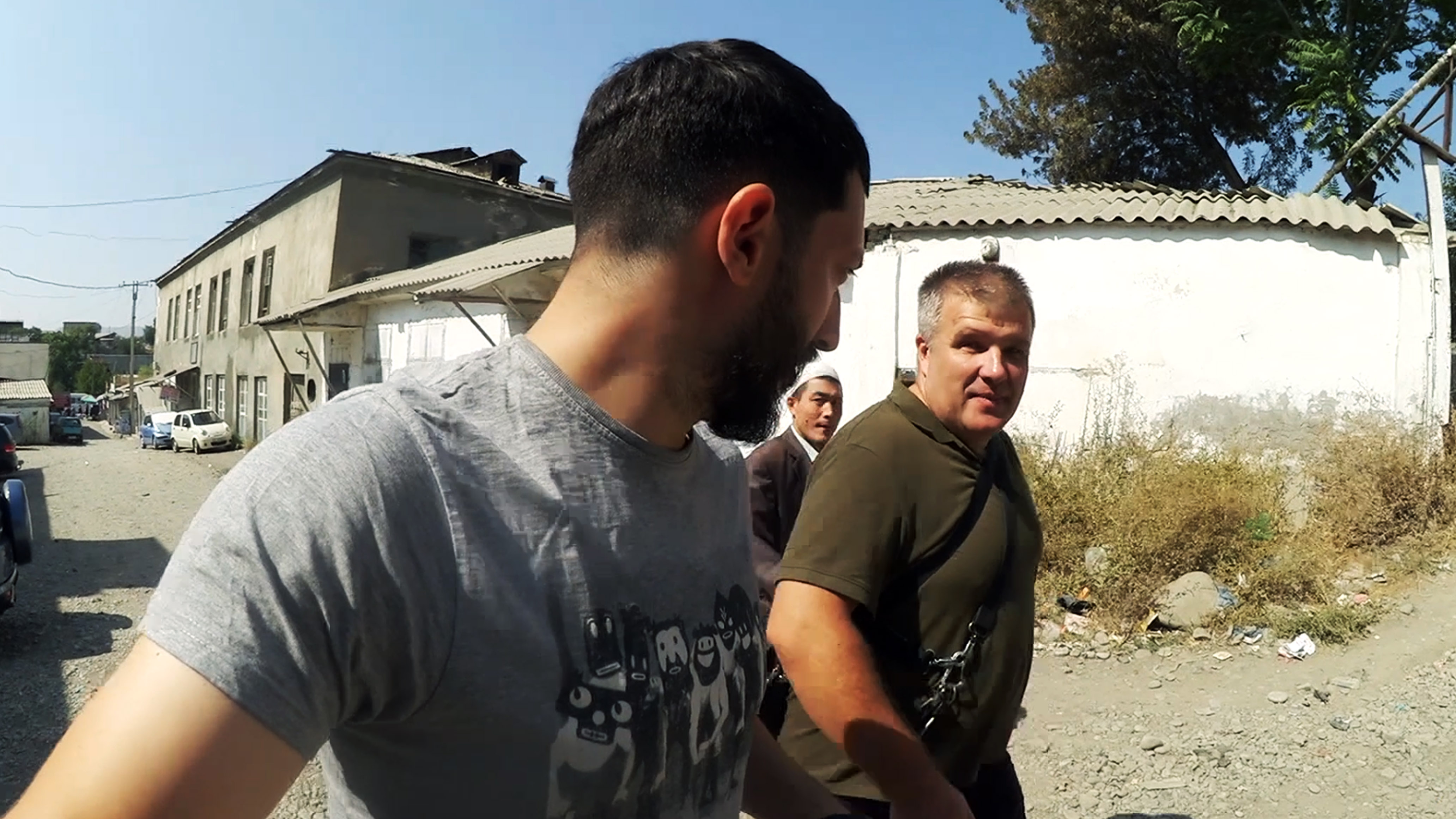 Episode 49 – Back in Kyrgyzstan

I’m waiting for the officers to validate my passport so I can continue to Kyrgyzstan. The one who opened the barrier for me told me there are twenty kilometers between border control offices. Twenty kilometers of no man’s land where there is no trace of asphalt until you get to the final two or the kilometers. Quite a large stretch above three thousand meters of altitude with a single building in the middle as a homestay or hostel.

I was close to the end of this area when I spotted two bicycles on the road. As soon as I got in line with them, the road ended. There were four workers with a dumper fixing it and the only way around was taking a small detour across the river. Hopefully, it was not so deep, and we could all cross it without problems. The girls on the bicycles continued and I spend some minutes with the workers there. They were curious about the motorcycle and wanted to have some pictures with it. I got to Kyrgyzstan’s border control’s entrance along with the cyclists.

It took me about thirty or forty minutes to get passed the control area as almost everything there was made on paper. I was asked to pay five hundred Som as an ecologic tax. Or was it for temporary import? Who knows. The only thing I got clear is that I have tricked by the border control officers while exiting Kyrgyzstan two weeks ago, as they asked a thousand Som for the same thing. Anyways, it is not a lot of money, but it always hurts when you realize they have fooled you just because you are a tourist, or the police are corrupt. The cyclists got through directly. No additional registration required rather than the passport check.

I drove a bunch of kilometers before meeting Sarah and Rebecca again. They are cycling from Switzerland to New Zeland, fundraising for forwarding Foundation on the way. They have started just two days before I did. Our fast calculations said I would have probably made three times more kilometers than them, but It would have cost me three or four times more obviously. I can’t imagine the enormous physical effort you have to do to ride on a bicycle almost every day for an average of seventy kilometers. Maybe crossing borders is easier but that is too much for me, even if this motorcycle was not made for the roads I’m driving in nowadays.

I finally arrived in Sary-Tash, the first “city” in Kyrgyzstan. It was now time to fill up the tank again. I stopped at the only gas station I found and tried to pay with my credit card, but it was not possible. I tried a second time offering to use Somoni instead. The Som I could have used was given to the border officers. I was offered an exchange rate, but in my mind, the calculations told me I was being fooled as well and decided to risk it to get to Gulcha as the reserve light was still off. I must say this gas station didn’t try to fool me. As well as if they do it wrong, you must be humble and say if you were the one who was making a mistake. The problem I had at that moment is that I didn’t remember exactly what the exchange rate from Euro to Som was, and my calculations gave me a very different result. Obviously, not too long after leaving the city, the reserve light flashed at me again. I was twenty kilometers away from the city and had eighty kilometers to Gulcha.

On my way, I found some other gas stations that were not on my map. As stupid as I may seem, I didn’t stop there because I was trying to get to Gulcha no matter what. These gas stations were very small and there was no chance I could pay with a credit card. Even when I arrived in Gulcha, it took me a while to find the only gas station in town where it was possible to pay with a credit card. Sleeping in the wild for a couple of days made me forget what day it was. I was not aware it was Saturday until I ask someone for a bank to get local currency. In addition, my sim card didn’t have credit anymore and it was obviously not possible to activate it again without cash. Hopefully, I found this gas station where I could fill up and the guy how served me shared me wi-fi connection from his phone so I could contact Vladimir in Osh. I needed to tell him I was arriving in town to set a meeting place. Again, on the way to Osh, I found myself surrounded by sheep, cows, horses, and shepherds.

I met Vladimir when I arrived in Osh, and he took me to Zhukov Hostel. I was planning to rest for two days in town while trying to fix some of the things that broke down in Pamir. The first thing I fixed was the rear light panel. I thought it was going to take a lot of time and effort to find the problem but this time I had the motorcycle in an open space where I could use the help of the sunlight. I quickly found the problem: a broken plug. There is no chance to fix this properly here, and fast, I used a plastic stripe to hold it together.

Vladimir helped me fix the saddlebags. We visited three different shoemakers before having them fixed. Unfortunately, the first one was closed, and in the second one, the master was away. I needed to get the saddlebags sewed again and reinforced in the bottom. All the off-road we have been through together had damaged them seriously. We went to a restaurant to have lunch, and after an hour they were repaired.

Being back in Osh gave me the chance to spend some one-on-one time with Vladimir. We have met in Dushanbe during the motorcycle festival organized by Irbis MCC, along with a bunch of bikers from other countries.