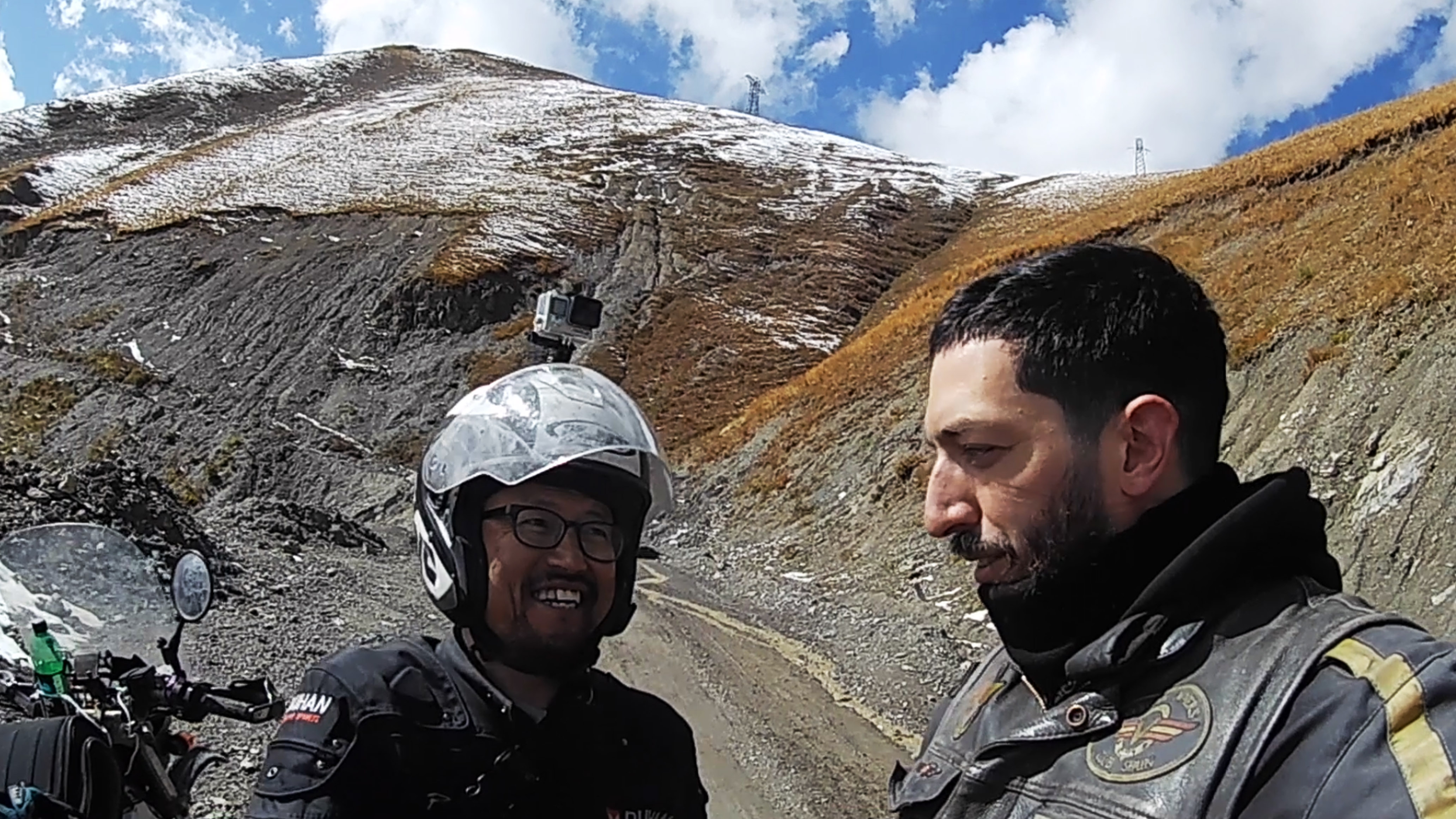 We left Osh around half-past seven in the morning. I didn’t want to leave very late and Stas, the hostel owner, needed to travel to Bishkek. I haven’t put credit on my Kyrgyz sim card yet as there was wi-fi in the hostel. I would need to do that to be able to call if anything happened on the way. After an hour and a half, I arrived at a crossroads not too far from where the road was ending. Once I passed Jalal-Abad, I was one with nature again. No asphalt on sight, just dirt, and stones.

I drove for about two hours and a half before I arrived at the top of Toruz-Topo. This pass would take me to Naryn province and to Kazarman, the next big village on the road. The road up to the top was almost completely on dirt. It was cold as the road reaches two thousand meters of altitude. The snow was crowning the mountains and part of it was melting down on the road creating small rivers. This phenomenon obviously was making the road even more irregular as the water grooved it with no sympathy, leaving traces of ice and mud on the way.

On my way down, I found Bae. Another South-Korean guy traveling alone on his Kawasaki Super Sherpa. He has spent some days in Kazarman and he was now on his way to Osh. I was planning to get to Naryn that day, but some people told me that was not going to be possible. Even Bae told me he spent about seven hours and a half between Kazarman and Naryn. We were now an hour and a half away, maybe two, from Kazarman. He also told me that once I reached Naryn, I would find asphalt again. I was curious about this because I heard people say Karakol was in quite bad conditions, but it seems it is only the road which goes up to the hot springs in the mountains. Bae insisted about spending the night in Kazarman and continue tomorrow. Oh boy, he was so right!

A couple of kilometers before I got to Kazarman, I found a guy parked with his car in the middle of the road. The problem was he had run out of fuel. As I had my jerrycan full, I offered him some, but I was not sure if giving him all or not. Benzine is not expensive here but I needed to be sure I would not need it myself farther down the road. The guy used his hands to tell me he just needed one or two liters to get to the city. We didn’t have anything to measure it, so he pulled out a bottle filled with beer and simply thrown the content away. Just a couple of minutes later, we were both on the road again.

I filled up in Kazarman and tried to find a place to have lunch. Unfortunately, all the restaurants were closed by that hour so I decided to continue. I had received a message from Ludmila, Constantine’s wife, asking me if it would be possible to get to Novosibirsk a couple of days in advance. I looked at the map and I didn’t find any other option rather than continuing off-road until Naryn. That would take a lot of time and I would have to drive back to Bishkek to get to Kazakhstan. I asked at the gas station if there was a road which would go north and help me shorten the distance. Even if there was no such road on the maps, the locals told me there was.

I went to the village on the other side of the Naryn River. The locals there told me to continue but I after a while I only found a dead end. I went back to them and they insisted that was the road to follow. I said to myself: “maybe they meant this other one”. Again, half an hour later I found another village where locals told me there is no road ahead. I was really pissed off at that moment. I trying to figure out how the hell to get out of this off-road madness and I had just lost two hours going back and forth on a road I shouldn’t be in. I went back to the main road and continued my way to Naryn.

I obviously didn’t make it that day. I was driving very slowly, and it was taking too much time to get anywhere. With time, I found myself going through an off-road high pass in the middle of the night, where it was not possible to see clearly more than five meters ahead. When I finally left those curvy roads, I was relieved that I wouldn’t need to worry about falling down the cliff anymore. After a while, I arrived in Ak-tal.

My map indicated there was a bunch of homestays there. It was almost ten o’clock and it was completely dark. There was no sign of civilization rather than some houses with the lights on. I didn’t want to be knocking on everyone’s door and I was almost ready to leave when I saw a couple walking. I tried my best to make them understand I was looking for a place to sleep but they couldn’t help me find the ones on the map. Instead, after a couple of minutes, the man offered his house to me.

Episode 49 – Back in Kyrgyzstan