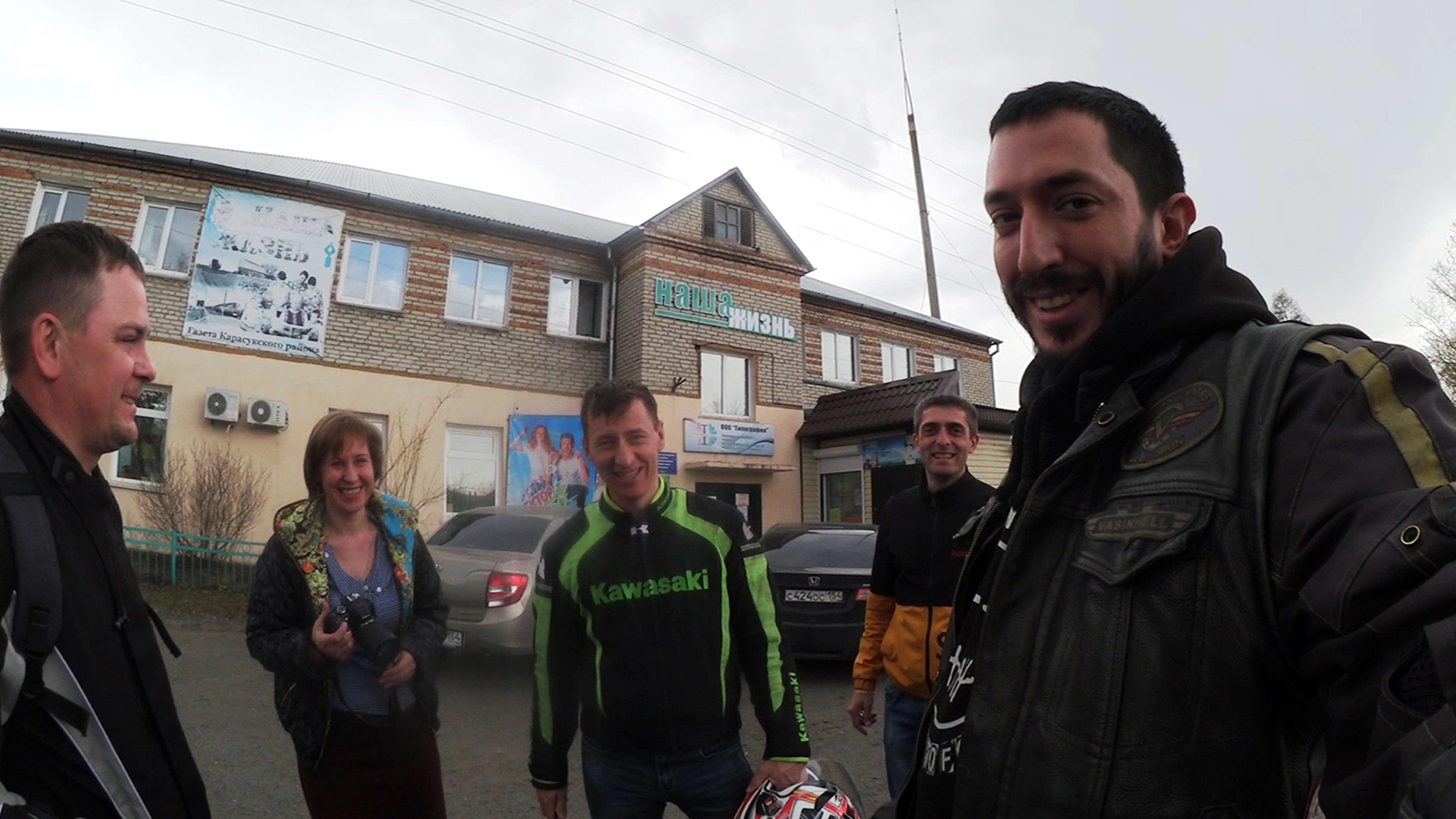 I left Krasnozerskoye and took the road down to Karasuk. These are going to be the last kilometers I would drive on this road. The road where my trip ended last year. Sergey took his motorcycle and accompanied me for the first ten kilometers. As soon as we got out of the city, the police stopped us. That is already three times in the same area. I didn’t need to hop off the motorcycle, nor show the papers. Sergey spoke with the officer and a minute later we were driving again.

I drove by myself only seventy kilometers. Aleksey and Anton intercepted me about ten kilometers before arriving. The same thing Sergey did when I was getting close to Krasnozerskoye. We all went to have lunch to a pizzeria with another friend of them who was also there, Andrey. The owner of the pizzeria was so excited to have me there that she did not take long to ask me to have a picture with her to put it on their website. As I had no plans scheduled, the boys took me with them to fix the motorcycle of another biker who was also having dinner at Sergio’s house two days ago. We went to Anton’s garage to spend the afternoon and repair the motorcycle while Aleksey went back to work. The guys dismantled the tank and check the pressure on the cylinders. Something was not working well but they managed to get it working again. Right after rebuilding the motorcycle, Anton invited me underground to get some more food. It is quite cold in these basements and therefore used as coolers. They had wine and compote as well as other vegetables. After a couple of hours, Aleksey came and took me to Dimitri’s house to spent the rest of the evening.

The next morning, I accompanied Aleksey to work. Before going to his office, we set a few marquises on the road. At lunchtime, the reporter from the local newspaper was waiting for us. At this point, it seems I’m going to do more interviews in Russia than anywhere else. In fact, Olga had already published an article about my trip last year on the newspaper and on a regional news forum. As she didn’t speak English, we used the telephone translator to understand each other. It was quite tricky because you need to be very specific when using this tool. Otherwise, the idea will be misunderstood on the way.

After the interview, Aleksey and I went to visit a warehouse nearby where they restore old vehicles such as cars, motorcycles, and even airplanes. We also went to visit the airfield where airplanes and helicopters are stored while being restored. Later on, we went back home and Aleksey went to his office for a while to get me some lase cut vinyl with my trip name on in to put it on the motorcycle. When he returned, he surprised me with a set of cups with some photos that we had together. Unfortunately, I couldn’t take them with me and had to post them home. I don’t want to break them on the road as these are delicate materials.

Right after dinner, Anton, Dimitry, and his wife, Eloina, came home to farewell me and have a little time together before I left the next day.