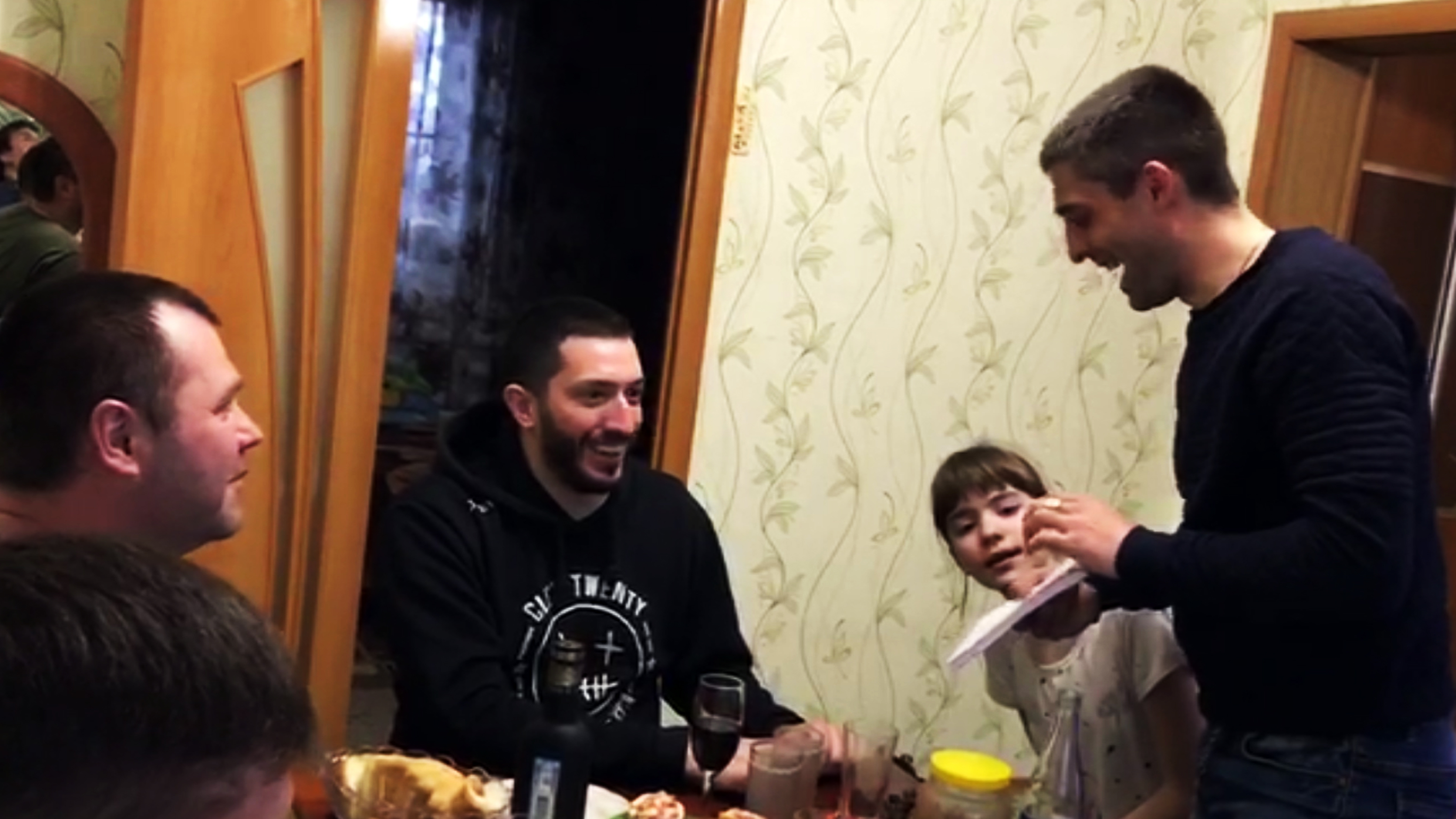 After being intercepted on the road, Sergey and Roman escorted me to Sergey’s house. It’s been almost eight months since I had to stop at Sergey’s due to a breakdown on my motorcycle. I was driving back from Tajikistan with a broken rear shock which ended up breaking the drive belt as well. I was brought to his house again, where they were expecting other bikers to come. One of them was Aleksey, who also helped me last year with the breakdown. We all had dinner together. Marina, Sergey’s daughter, gifted me some handmade teddy cats and candies for the road. After dinner, some left and Sergey, Aleksey, Anton, and I spent some time in the Sauna. With all the food I had, plus the usual alcohol in Russia, my blood was mostly in my stomach and couldn’t last more than ten minutes in a row in there.

During the evening, I realized Aleksey was not from Krasnozerskoye but from Karasuk, about a hundred kilometers farther down the road to Kazakhstan. In fact, that is where I put the credit back to my phone last year to contact Ludmila and Constantine. I was surprised about this and asked him if he drove all the way up to help me the year before. The answer was no. I got lucky that Aleksey was Ludmila’s contact and he was returning from Novosibirsk to Karasuk. He was the first to make it to my location and called his own friend, Sergey. Let’s call this a cosmic synchronization.

The next day, Sergey took me in town for a quick tour. On the way, we picked up Marina, the local reporter who published my rendezvous with Sergey and Aleksey last year. We walked around the city center and took some pictures of the newspaper. After that, Sergey took us to the local Sanatorium, which is quite famous due to their healing treatments with clay extracted from the local lakes. Marina, the center responsible, showed us around. We visited the surrounding parks and the treatment facilities. She even gave me some samples of their healing clays and salts for me to try! As much for the city as for the spa center, Marina, the reporter, accompanied us, We managed to make a small interview by calling a colleague of hers who speaks English to help us with the translations.

When I arrived on Saturday, Roman realized my motorcycle was doing a strange noise. It turned out that I didn’t change the front brake pads as I had forgotten to bring them from Spain. Sergey contacted another friend and told me he could have the brake pads by Monday morning. Somehow, problems seem to be solved pretty fast and easy when you have the right contacts. We spent the rest of the afternoon playing board games with the children and flying kites. Later that afternoon, Sergey told me that another friend of his could bring the brake pads that night. This guy is a bus driver and he would be driving from Novosibirsk to Karasuk that night, stopping in Krasnozerskoye on the way.

As the day before, people are passing by and another friend, Maxim, came for dinner. After that, we went for a walk around Sergey’s neighborhood and ended playing football with the neighbor’s children. For them, it was like a Russia-Spain match. At least, I managed to score a goal. At ten o’clock, Sergey, his father, and I went to the bus station to picked up the brake pads. A couple of minutes later, they were installed on the motorcycle while the parents of the kids we played football with came to pay a visit.

On Monday morning, I took Sergio’s daughter to school on the motorcycle. Once there, I followed Sergey to a friend’s house to ask if he could fix my Handycam. During our visit to the Sanatorium, I realized the camera display was not working properly. In fact, the display cable was damaged and the image is lost when manipulating the display. Unfortunately, there is no chance we can fix this here because online stores do not post to Russia and it will take forever to wait for a replacement ordered by a Russian shop. At least the camera works and it is only a preview display problem. From what I could find on the internet, the cost of the cable is extremely high compared to the camera value.

The time to say goodbye to Sergey again. Aleksey would be waiting for me in Karasuk that day. The only thing left to do is thanking Sergey and Elena for their hospitality, again.