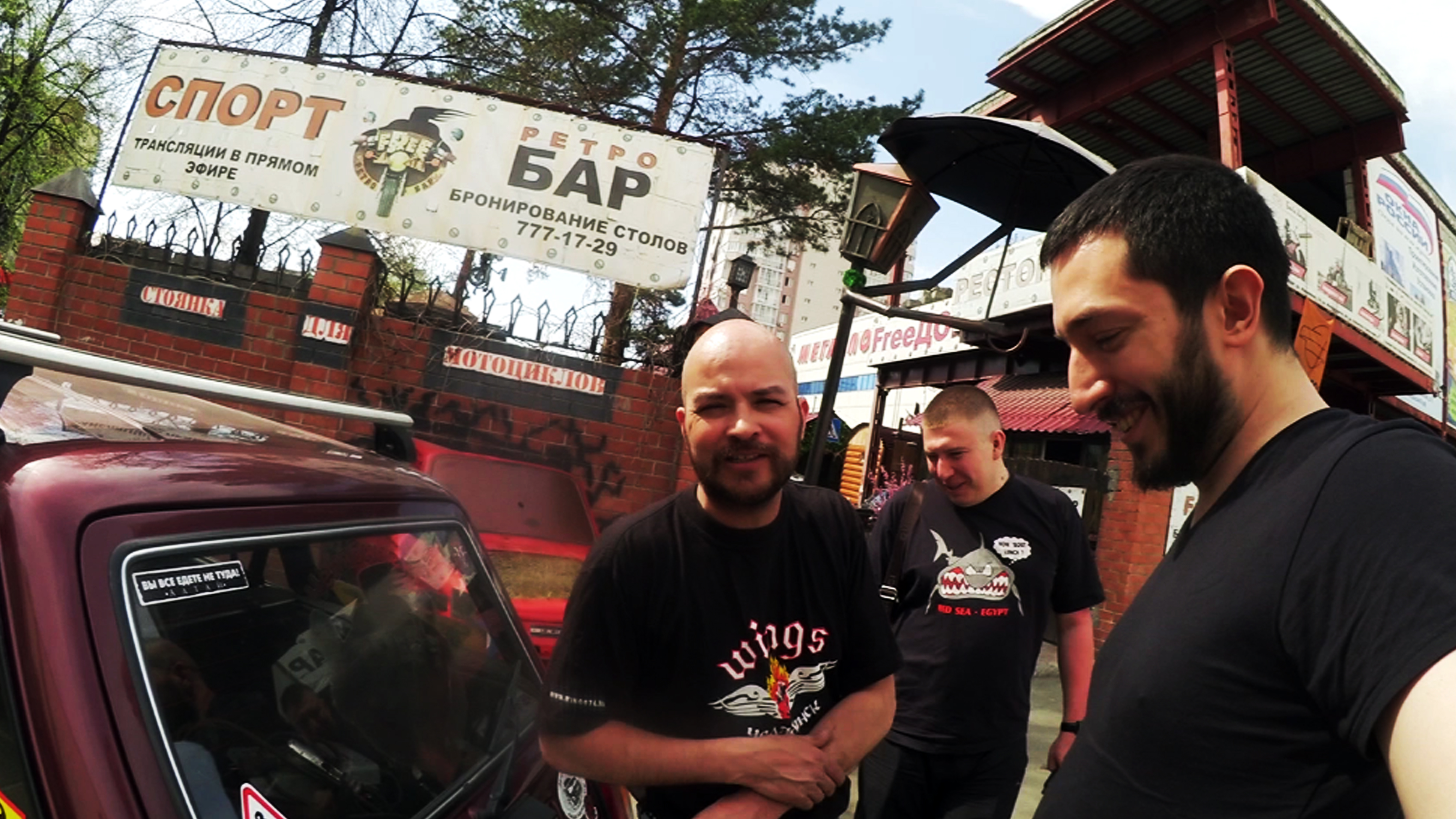 Episode 60 – On the way to Chelyabinsk

It is Monday morning. We were supposed to leave on Sunday but unfortunately, my Hard Drive Disk had some issued that took me about twenty hours to solve. Even if Lili and Max invited us to stay as long as needed, we need to be on the move. After having breakfast, we prepared the motorcycle and farewell the family. We would see them again on the way back from the Arctic Circle to Mongolia.

I left Omsk at about ten o’clock and stopped at the first gas station I found on the road. A big yellow motorcycle caught my attention. It was Sasha’s Goldwing. May 9 was just around the corner and Sasha was driving from his hometown Komsomolsk-on-Amur, north of Vladivostok, all the way west to Berlin. Victory Day is a holiday that commemorates the surrender of Nazi Germany in 1945. Sasha’s grandfather was a soldier then and therefore he wanted to pay tribute to him by doing this long trip. Sasha is now driving up to Chelyabinsk. As my destination today is Ishim, I will join him for the first three hundred kilometers.

We didn’t stop until we got to Ishim’s exit. It was now time to decide whether I continue with Sasha or I stay here. I was thinking on the way to continue to Chelyabinsk. Why not? It would be a long ride but I could spend two night in the same place and maybe visit Marya and Andrey, who I met last year. When we were about to continue, Aleksander appeared. His is a member of HOG Russia, on his way to Vladivostok from Moscow. We chatted for a while with him before we all continue our paths. Just five kilometers later, Sasha and I stopped in a gas station to refuel and we found another biker. Volodya is from Tyumen and he is on his way back from Kazakhstan. As it was around two o’clock, we stopped for lunch a couple of kilometers ahead.

Volodya told us the road we were about to take was swingy and not in good conditions. He offered us to go with him almost up to Tyumen, and turn left to Kurgan before arriving. It’s about a hundred kilometers more in total, but the arrival time was the same. We drove two hundred kilometers together before we went in separate ways. Sasha and I kept driving and driving. There were around six hundred kilometers more to go. We stopped for dinner about a hundred sixty kilometers before the city. The night was catching up on us and eventually did it at last. We arrived in Chelyabinsk at midnight. My phone was completely out of battery but Sasha managed to find a hostel close to the city entrance and for a reasonable price. It was now time to rest after sixteen hours on the road.

The morning after, I went to the cafeteria next to the hostel with Sasha for breakfast. Another guest that was sharing our room came with us as well. I was not following their conversation as they were speaking in Russian. It was not until the evening that I learn that this guy spoke a little bit of English when he came back to the hostel. He was supposed to leave that morning to buy a new motorcycle and drive back home to Yekaterinburg. Unfortunately, all the paperwork he had to do took much more time than expected and he had to stay one more night. Sasha left around eleven o’clock and I stayed all day in the hostel working and uploading things to the cloud in order to avoid losing anything else on the computer.

On Wednesday I went to FreeДом restaurant before leaving the city. I was planning to be in Yekaterinburg by eight o’clock and I had time enough to cover the distance between these cities. We were at this restaurant last year with Marya and Andrey, as well as for Vlad birthday party. I arrived at the restaurant and Vlad was not there at that time. I decided to have something for lunch and make some time until he arrives. Vlad arrived with Victor, who shared the table with me. They wanted me to visit the local Museum to see the remains of the meteorite which hit Chelyabinsk a couple of years ago. Victor and Anastasia took me for a ride and showed it to me.

Just before leaving, we went back to the restaurant. While going through the front door, I saw a car full of stickers. That was Vlad’s car. The first sticker that called my attention was the one of José Antonio, my friend from Pamplona who was in this area last year a month before me. There was not just one sticker, but almost his all collection. Vlad was very happy to show them to me. Of course, we put our own on it.