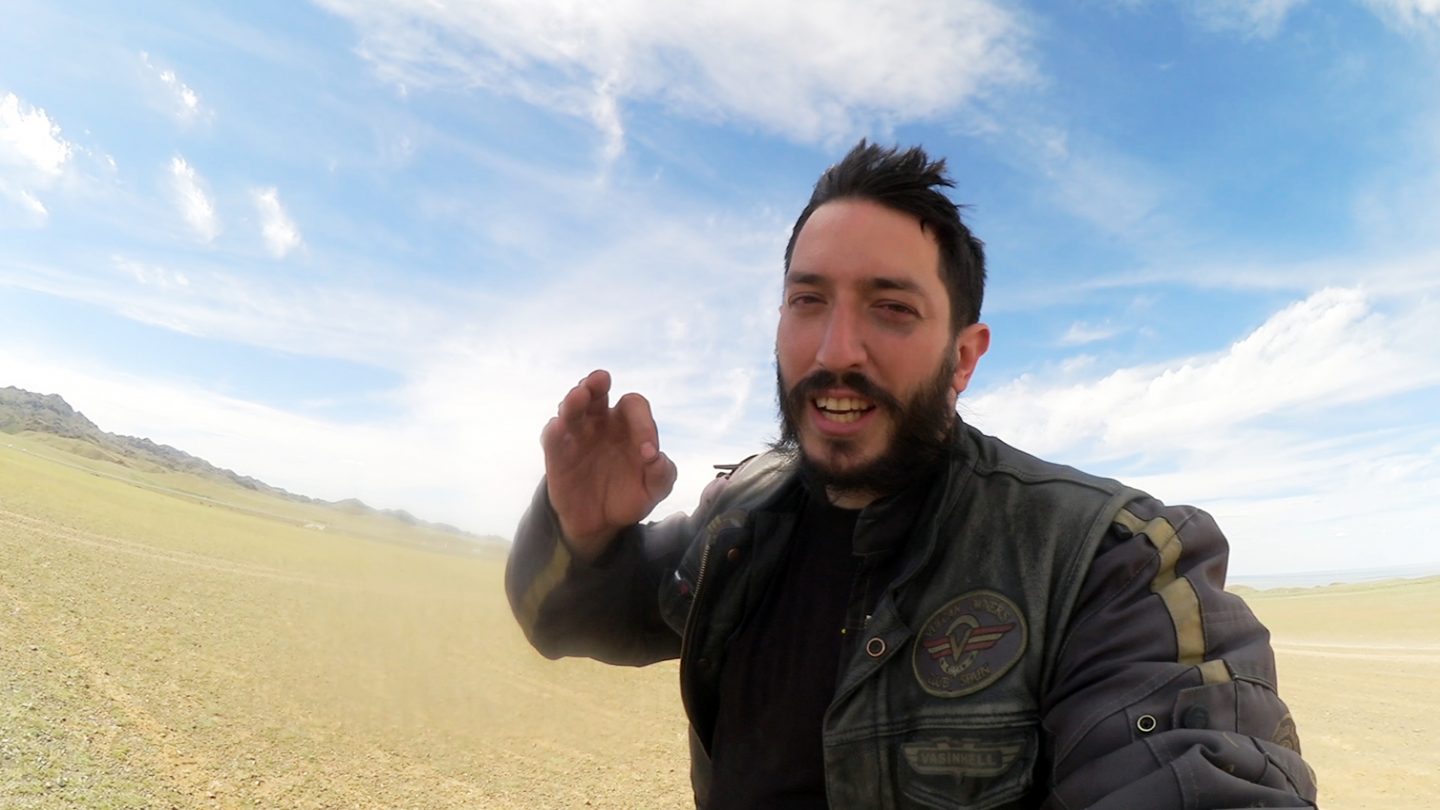 The temperature began to elevate inside the tent. Although I had picked one that has heat reflection material, sometimes it turns into an oven. I opened the doors with a simple move and let the morning breeze inside. Even if I had bought some food the day before in Luus, I couldn¡t recall why I didn’t have dinner. At least, not a proper one. That probably happened because I forgot I had bought water to cook as well. I guess I got a little distracted with the kids and left it by the motorcycle.

That morning, the story repeated itself for breakfast.

Fortunately, I had some cookies with me as well. While packing up my stuff the kids came to say hello and brought the youngest family member with them. The oldest of them, Tojgoroma, continued trying to communicate with me. Inevitably, it was kind of difficult for me to get all the messages right. At some point, she began pointing to animals and naming them in Mongolian. I started writing down those words on my mobile as I was hearing them. Tojgoroma, just as a good teacher, corrected me after.

I felt Tojgoroma somehow connected with me. Like if we were sharing some kind of secret she could later share with her family. Suddenly, I remembered that someone with who I was sharing a room in Barnaul gifted me a small matryoshka.

Tojgoroma has two sisters and a brother.

The matryoshka was composed of four pieces, which was just perfect. After asking how to properly spell their names I wrote them on each piece in order of age. Tojgoroma was so happy, she couldn’t wait to show it to their mother. I wasn’t expecting something in return but she told me to hold still. She disappeared behind one of the sides of the yurt and grabbed a bunch of stone-shaped homemade goat cheese. I didn’t know this was cheese until a couple of days after. In my mind, right now, those were genuine leather ceiling holders for the yurts.

I extended the chatting with Tojgoroma a little more before hitting the road again. It was just then when their uncle arrived on a small motorcycle. Curious as to everyone around here, he began inspecting the bike while Tojgoroma was telling him “don’t touch this”. The excitement was so big he wasn’t listening at all, and I can’t blame him for that.

He was staring at a two-wheeled spaceship parked in his brother’s backyard.

I was expecting to have some news from Max when I left but there was barely a telephone signal around. I drove towards the main road and continued South hoping to receive a message from him soon. It was almost lunchtime when I reached Dalanzadgad. Still no status update from my fellow adventurer. I stopped at the supermarket to have something fresh to eat and drove away not too far from the city exit.

While parked, a car stopped beside me. The driver offered me some soda as he asked about my journey. Using my poor Russian vocabulary, I told him I was just having lunch and waiting for some friends to arrive. I was not sure when Max was going to meet me and I didn’t even know where he was. The sun was so strong my new friend invited me to wait for Max at his car workshop. At least I would be waiting under the shade in a more refreshing environment. The guy just happened to be a biker as well, and as soon as we arrived he gave me a large sticking with their club name on it: “The dune riders”.

I spent most of my time there figuring out where to go after.

Someone told me there were some falls into the mountains West of the city. They didn’t seem very accessible from the map’s point of view. However, the group of people working there gave me the right instructions. I should see a sign pointing to my destination on the side of the road not too far ahead. The timing was perfect as Max texted me they were in Luus. Bearing in mind the time it took me to get here, I could probably visit the National Park before they arrived.

I left the city around 4:00 o’clock towards the falls. As indicated, just thirty-five kilometers from the city I found the signal: ”Gobi Gurvansaikhan National Park”. I had to drive a couple of kilometers over the steppe on a dirt road to get to the entrance. It was incredibly windy that day. However, I haven’t felt it until I stepped down from the motorcycle. Once I reached the checkpoint realized I didn’t have much time left to visit it. The place I wanted to reach was ten kilometers ahead on a sneaky rock road, and the barrier would stop the incoming traffic in about an hour. I could see the park had a small bus service to take groups to the top.

Would this prevent visitors from getting stuck on the way up?

At least it would keep away traffic jams. In any case, it was too late for me to get into one of those. I had a hard time driving there. The first part of the road was pretty flat until a considerable constant upwards slope appeared. Inevitably, driving those ten kilometers brought me back some memories of Tajikistan and its Pamir road.

Even with the barrier controlling the entrance of new vehicles, every once and a while I was overtaken by an SUV or found myself facing an overcoming one. The narrowness of the road and the carefree driving of those vehicles made it even harder. All my senses were focused on the ground the wheels were leaning in.

It took me around half an hour to reach the end of the road. I was surprised to find a parking lot full of cars and buses. A French family gave me the proper directions to follow and that was it. I had only thirty minutes to get to the waterfalls and return to my motorcycle.

And then, I began to walk.

While everyone else was walking back to their cars, I was going towards the mountains. Even if I had received some directions, there was no doubt where to go. The pedestrian area was delimited by hills on both sides with a green layer of grass and a little trickle of water running between them.

Ice blocks appeared as soon as I reached the last part of the canyon path. Then, the trickle of water I have been following was deep enough to continue. Time was ticking and I wasn’t sure how much further I had to walk. Wet rocks seemed too tricky and decided I wasn’t up for it.

Unfortunately for me, I realized later I should have gone all the way. Maybe I’ll do it next time I hit this place. A couple of meters away from my returning point, the cascade was frozen offering a beautiful sight to behold.

The way back wasn´t easy.

As I was riding my way back to the entrance, the tortuous road was now a downward slope. With the timing problem ringing in my head, I went down as fast as possible. I didn’t want to risk it. Unfortunately, it was another thing I wasn’t thinking about.

I drove up to the main road to wait for Max. He was in a supermarket in Dalanzadgad getting some extra food for the days to come. While I was waiting, I realized I had lost a five liters water bottle I bought. The unevenness of the terrain ended up loosening the ropes that held it to the motorcycle. However, that wasn’t the worst part of it.

Not too long before Max arrived I found out there was an oil leak beneath the motorcycle. The shock absorber was broken, again. As it has been changed two days ago, I started to worry about what the reason could be. Was I driving too hard on it? Was the country too much for my bike?

There was only one thing I could do.

I waited for Max to arrive and we settled the campground not too far from the main road. My plan was to continue to the dunes with them but the thorns had suddenly changed now. I had to give my full attention to this new situation. Despite being two hundred kilometers closer to the capital than the last time it happened, I would be riding alone. Luckily, only a few kilometers would be done off-road.

I farewelled Max around ten o’clock the next morning. In my head, I had the feeling I could drive the whole six hundred kilometers that day on a known road. In fact, I did. I arrived very late at Koji’s garage. The capital’s traffic and the very bad weather I entered near the airport made the last seventy-five kilometers twice as long.

And so this ends here. I was lucky enough to get a fast replacement thanks to Max’s friend flying to the capital last week. This time, I would have to rely on the shipping transports and that could take forever. I decided it was better to pack my things, take a plane, and go back home. Hopefully, I would return and continue soon.