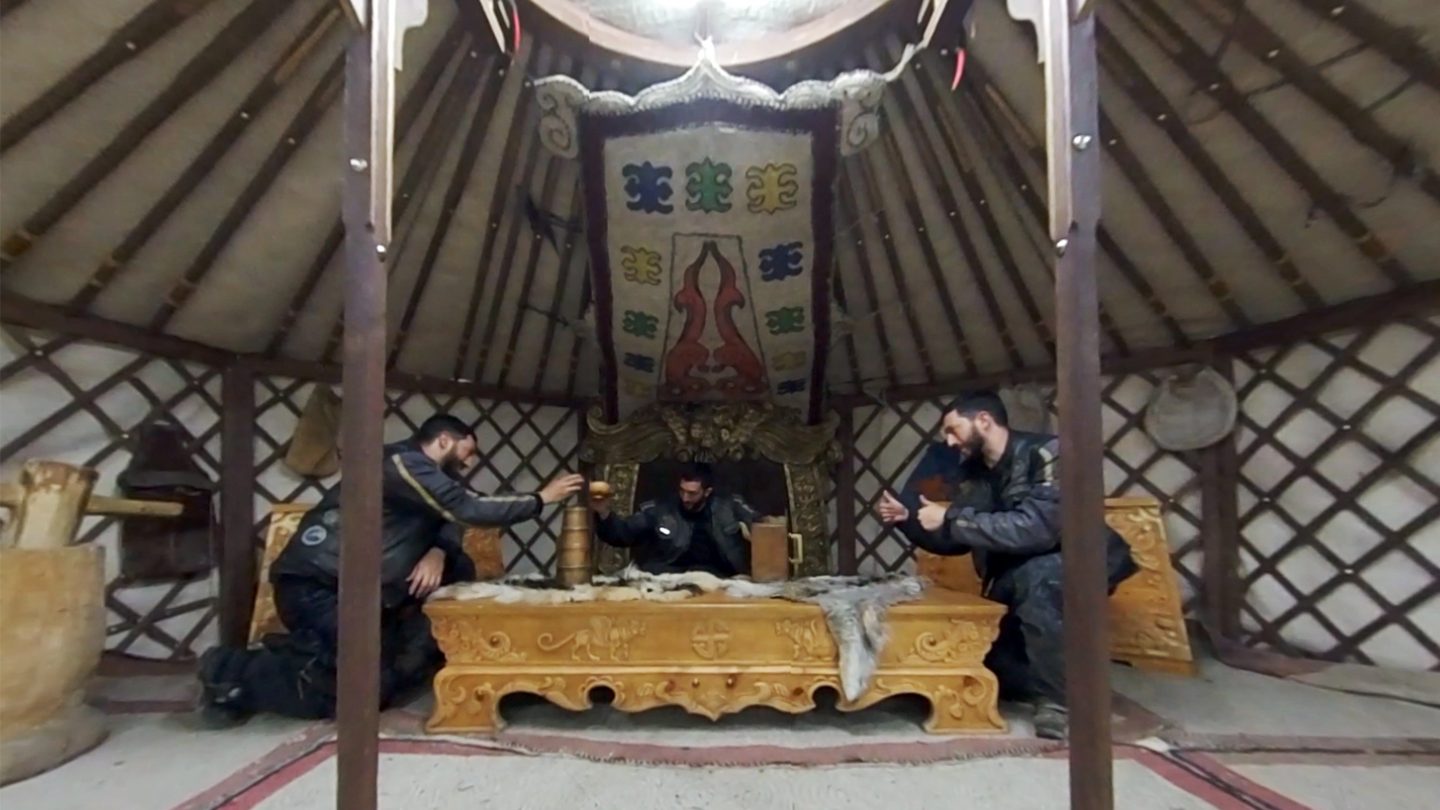 It’s Saturday morning and the clock is ticking. Today we are leaving Ulaanbaatar to reach Koji’s garage so we could repair our motorcycles. A friend os Max would arrive on Sunday morning and bring the spare parts with him.

We left the hotel around twelve O’clock. The sun was at its zenit and the asphalt reflected all the heat back to us. Koji’s garage was about ten kilometers out of the city northern boundaries. Despite the short distance, getting there was a nightmare.

It took us about an hour to do the first leg. That was less than half of the total distance. The traffic jam was so dense that it was not possible to pass two red lights consecutively. Max’s motorcycle suffers a lot from heat. However, it wasn’t until we reached a commercial area that it died. Max was driving behind me and I didn’t see him stop. Luckyly, another driver waved at me fifty meters after. It was so hot that the engine couldn’t keep up and needed a rest. Actually, we needed it too.

Max kept an eye on the motorcycles while I went to get some fruits and water. We waited about forty minutes before starting again. The bike seemed to be working. However, Max would drive first this time so I could block the traffic if needed. A couple of hundred meters ahead the motorcycle stopped for good. Luckily, Max had a special rope we could use to pull him. Even if mine’s had the shock absorber broken I was not carrying extra weight. We set the rope around the saddlebags support and hooked Max’s fork on the other end.

Although I was pulled eight years ago in Sweden, it was my first time pulling another motorcycle. It was really tricky. Plus, the sinkholes and the speed bumps didn’t help. Having a broken rear shock and Max squeezing the brakes from time to time was stressfull. However, we manage to drive another seven kilometers and getting both motorcycles to Koji’s garage.

Koji’s came to welcome us along with his wife. We spend the first half an hour explaining the issues and how we would fix them. Before that, we needed to shower, set our rooms and clean the motorcycles. As both rooms were occupied, we decided to stay outside in one of the yurts.

There were other three guests in the house that day. A Japanese guy driving to Mongolia in his scooter and a couple coming from Australia, Suzanne, and Luigi. Although that is the country they are living from, Luigi, originally from Italy, met Suzanne, from New Zealand, during his round the world tour back in the day. A lovely couple who returned to the hostel due to an unfortunate accident where Luigi got his ankle twisted.

While Max took care of his motorcycle, Koji helped me with mine. The first thing I wanted to do was replacing the rear wheel and pulley bearings. Something necessary after fifty-five thousand kilometers since the last replacement. Getting the wheel and the pulled out was an easy task. Having the bearings out, not so much. Koji had to use some self-made tools he has and after quite some time we managed to have them all removed. I don’t know how on earth I would have done this without him.

Although Koji’s wife takes care of the kitchen for guests, Max and I went to the nearest supermarket to get our own supplies since the yurt had a stove. That was about five kilometers from the hostel. Unfortunately, both motorcycles were already half disassembled. Therefore, we used a self-made automatic van Koji has. It felt weird to drive on the right side of a vehicle for the first time. As in Stans countries, the proximity to China makes people buy this type of cars. However, they keep driving on the right side of the road which, under my perspective, turns driving into a dangerous activity.

We woke up on Saturday with some news about Max’s friend. Unfortunately, he lost his flight connection due to the small amount of time between them. With that said, we wouldn’t arrive that morning but the day after. As our plans would delay, I dedicated some more time to my motorcycle and stripped her down as much as possible to clean her properly from inside out while Max continued with his motorcycle. By midday, we were trying to fix my benzine cannister. Back in the last days in Russia, due to the high temperatures, gas found its way through the plastic and left a hole on it. Since then, it was not possible to use it anymore. After several tries, Max came up with the idea of cutting some material off the canniester to fill in the hole. I guess that will do the trick.

Max’s friend, also called Max, finally arrived on Sunday morning with the spare parts. I woke up early to have the motorcycle ready for surgery as soon as the taxi dropped him off at the hostel. After his long journey through Russian airports, Max’s friend went to bed. I assembled my motorcycle before helping Max rebuild his, which looked completely scrapped.

On Monday we all left the hostel. I did it early in the morning while Max wanted his friend to fully recover before setting off. One of the things I wanted to visit was the Genghis Khan statue before continuing. So, we took separate directions planning to meet again somewhere on the Southern road. I tried to send the shock absorber back to Spain before leaving the city but I couldn’t find a post office willing to do it. In addition, in the middle of the city traffic madness, skies turned gray and it started to rain.

Not too far from the city exit I found the road was under construction. All the traffic was forced to take a temporary dirt road built next to it. Unfortunately, as it was raining the ground turned into mud making driving very difficult for me. Although I was driving slowly, a sharp squeeze from the front brake knocked me to the ground. I was lucky enough to have a bus driver stopping and helping me getting the motorcycle back on its feet. It would have been an enormous effort doing so on my own under the rain on slippery ground. Fortunately, the road works, and the rain ended near Nalaikh, leading me to Genghis Khan monument all dried up.

Erected in 2008, this monument is one of the symbols of Mongolia, as well as being known as the largest equestrian statue in the world (40m of height). Constructed in the middle of a theme park complex, it has a museum inside. A museum which is three times more expensive for foreigners than locals. The museum is set at the underground level while shops are distributed on the ground floor. The two things you can find when entering are the largest shoe and horsewhip in the world, symbolizing the ones Genghis Khan had.

After visiting the museum, I received a message from Max. They were about to leave Koji’s place and head South. As I was far East from the capital I tried to reach the conjunction point as fast as possible to meet them. Unfortunately, that didn’t happen that day. Max did half of the distance I drove. However, even if we were close we wouldn’t be able to contact each other as we were both in a signal-free area and phones weren’t working.

As there was no hope regarding us to cross our paths, I continued a little bit passed Mandalgobi until I saw a yurt on the right side of the road, about seven hundred meters inland. I was planning to stop anywhere to camp but I thought it would be a nice experience to stop near the locals.

I went off the road and headed towards a yurt I saw on the side. Three kids welcomed me as soon as I arrived. Tojgoroma was the oldest child and the one that tried to communicate with me. She is learning Russian at school but unfortunately, I’m not a Russian speaker myself. The phone signal coverage was still too bad in that area and we had a lot of trouble trying to get the translator to work. Mongolian is one of those languages that must have an internet connection to translate. However, using some basic words and signs she understood I asked if it would be ok to pitch the tent near their house. She granted me permission.

With the help of Tojgoroma and her sister, Ikhshinky, we pitched the ten. It was the first time they saw something like that and they were very curious about it. By the time we finished, their father appear. He did speak better Russian than his daugther which helped me thanking them again with the translator throught him.

The night was falling and the horizon was no longer visible. It was time for dinner. All the family gathered inside the yurt where grandma was cooking before moving to their little home to sleep altogether.