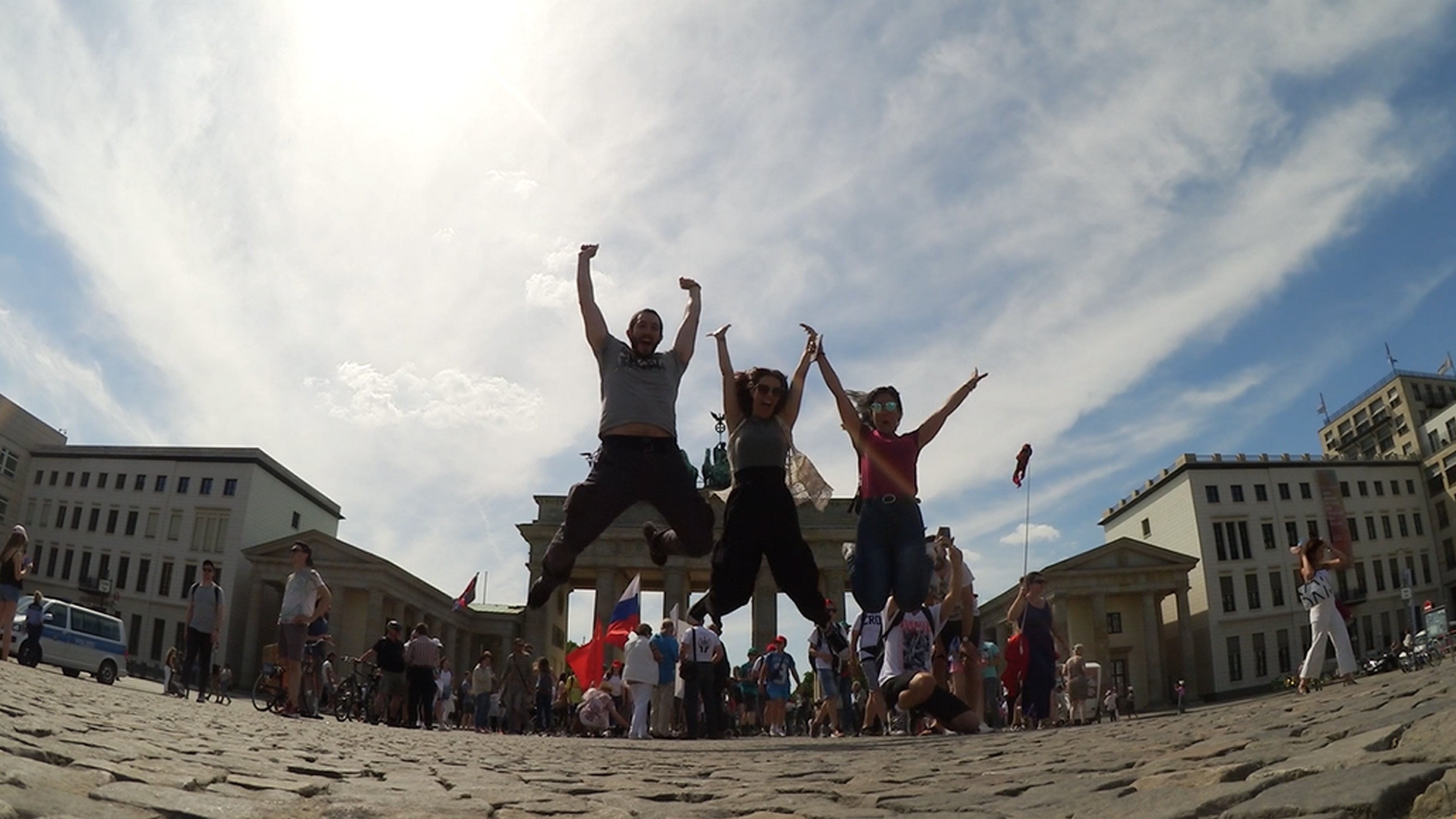 Back to Stefan and Meli’s house, I stayed a couple of days more in the city to change the front tire. Was it going to be easy? Maybe not if I had been on my own. Luckily for me, Stefan was around.

We took the motorcycle to his garage because it seems that in Germany tire dealers don’t take the wheel off the bike. I’m used to this in Spain and I witness in Norway they do the same thing. When I change a tire in Madrid I just go to my dealer, leave the bike there for an hour and it’s done! Here the answer is: “No sir, not in Germany.”. As strange as it may look to me, that is an extra service you have to pay and could be around 40 Euros more.

Stefan has a lot of tools in his garage and we managed to lift the motorcycle and take the wheel apart. We left the motorcycle like that the whole day as it was Sunday and the shop was closed until the next morning. Taking into account I was here for the third time and haven’t seen a thing of Nuremberg, Stefan and Meli took me to the city center for a walk.

Stefan showed me the Church of Our Lady, even if he says “St. Lorenz Church” on the video. The church was built in the grand market, in place of a former Jewish synagogue. In the same place, I found a 14th-century, 19 meters high, Gothic spire-shaped fountain called “Schöner Brunnen”. Melissa told me I should spin three times one of the rings on the fence for luck. I thought three was not enough and spun it five times. Unfortunately, rain made its presence and we had to find shelter in a bar. Oh boy, what a “problem”!

With the tire finally replaced, we said goodbye and headed north-east, to Berlin. A friend of mine was going to fly there for the weekend and I was going to spend two days with her there. Berlin was a city I wanted to visit with my girlfriend last year but destiny didn’t want it that way. We were driving across Switzerland on small roads from Italy to Germany, during our third ride day with Denmark as the final destination. We were not far from the border, around 150km I guess, and my drive belt broke just before entering a roundabout. I could tell you about everything that happened there with the mechanic, public transport prices and mechanical issues but, long story made short, that incident forced us to cancel Munich and Berlin. Destiny put Berlin again on my map and I had to take my chances on it.

I contacted Karin and Peter, a lovely couple I met back in 2014 when I attended Vulcan Riders Czech Republic tenth anniversary party. Every time I met them again they insist on visiting Berlin and meeting them there. So I did this time. Karin was not in town the day I arrived and I stayed with Peter for the evening. I was in Berlin one day before María was coming. She would take a flight with her cousin, Silvia, the morning after and arrive in Berlin by 10am. The ride from Nuremberg to Berling took me all day. I was tired but I worked overnight to have the Youtube channel updated.

I left Peter´s house early. I wanted to take the bike to Brandenburg’s door before meeting Maria and Silvia. We were going to walk around the city and there was no other chance to take a picture of both of them together. It is possible to get there with a vehicle but only bicycles can pass underneath the door. There is also no space to park and a lot of people walking around. It is the place where most of the city tours begin.

I could not communicate with Maria since she entered Germany. Some problem with her roaming signal left the phone idle. Instead, it has Silvia who wrote to me to tell me they were on their way. We met at Berlin Ostbahnhof station, not so far from the hotel they booked. After having breakfast and leaving all the stuff in the hotel, we went for a walk. We were amazed by the number of people walking aside the Wall. As many guided tourists as normal pedestrians. Following our own steps, after visiting the Memorial to the Murdered Jews of Europe, we ended in Großer Tiergarten looking for shelter and fresh air. We spent most of the day walking with no fixed direction. They were tired because of the flight and I was keeping the most of it for the next time with Sandra.

I went back to Peter’s House for dinner because Karin was already back in town. As German dinner time is a little bit earlier than the Spanish one, I had time enough to go back to the city center for a night walk with the girls. They took too much time to prepare themselves and they almost run out of opened restaurants for dinner. It was about 9:30pm and most of them were not accepting customers anymore. In the end, we sat in a cozy restaurant in front of Berlin’s Cathedral. I had a glass of wine and a small salad to share the table with them but paid significantly more for some mistake I made ordering the wine. My glass of wine was incredibly expensive!

Nightlife in Berlin was quiet that day. We are used to seeing in Spain a lot of people partying on Thursday. There were some opened bars but they didn’t have much to offer and we just stopped in one to have a couple of drinks.

The next day, I joined the girls for a free tour around the city. I only could share the first hour with them because I had to leave to the Netherlands to attend Vulcan Riders Holland anniversary party. I had to drive seven hundred fifty kilometers to the west but I had to leave Berlin first.