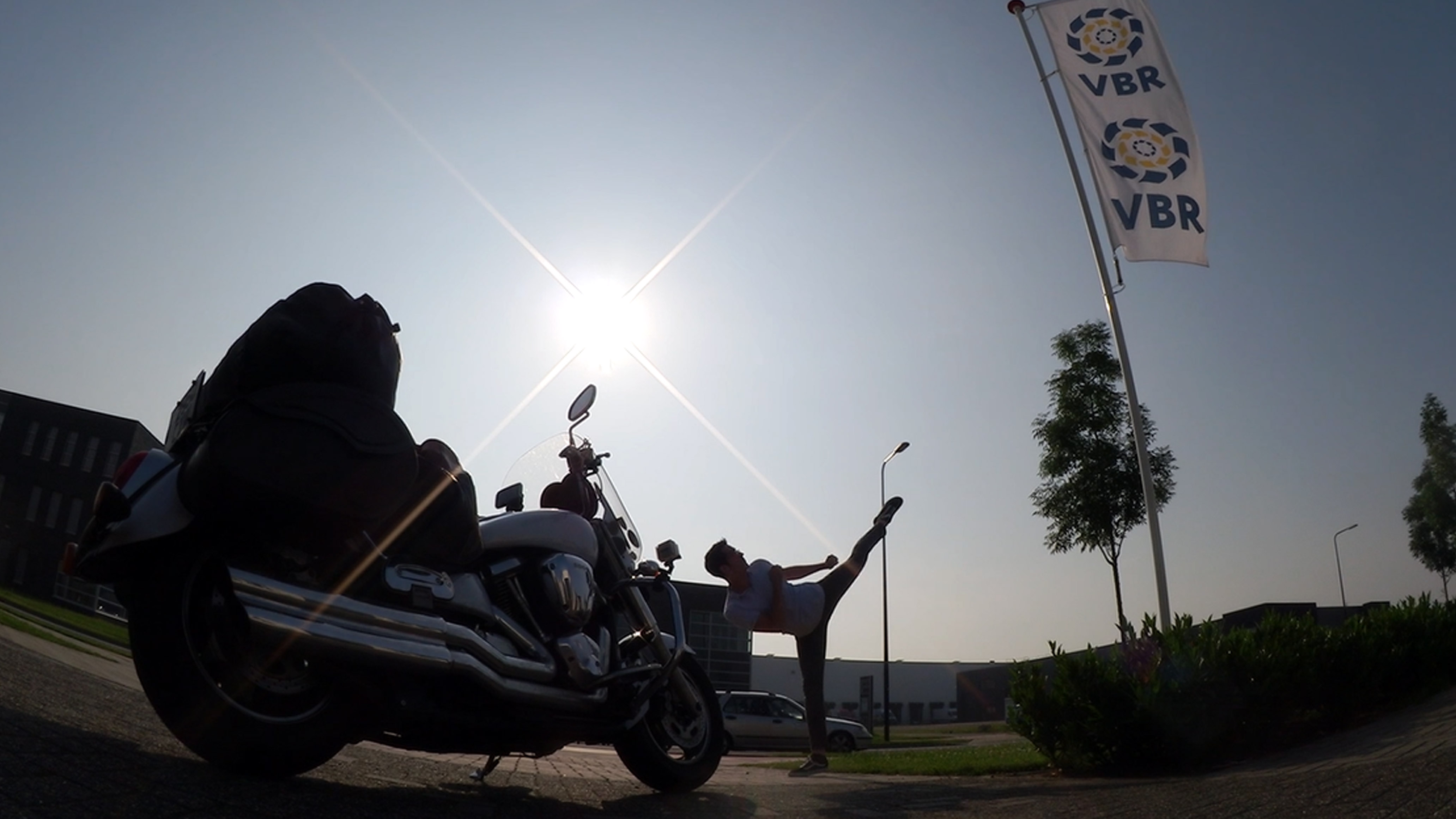 In today’s entry, we head South-east to Brussels to visit our friends Marina and Pascal. A small group of us left together after breakfast. As river tributaries, each of us was taking their corresponding exit on the highway until the last of us stopped near Roosendaal to have a lunch break. Only three of us were left at that point: Petra, Wim and me. I was waiting for confirmation from Pascal before leaving, so we took our time.

When I started the motorcycle again, the rain was getting close. Pulled out all the rain clothes. For some reason, I always buy this kind of clothing gray colored and therefore I look like a monochrome entity driving on the road every time I have to put them on. Gray clothing and white motorcycle. You get the picture, right?

I should be grateful I left with them. Once I crossed the border with Belgium, a fierce hailstorm began and flooded the highway in no time. There was no place to take cover and the hail seemed to be made of small needles hitting my legs. It did not last long, but it felt like it did. It was barely impossible to see through the helmet visor because of my own breath steam. After the hailstorm, the weather was warming up very slowly. By the time I was feeling hot with all this plastic wrapped around me, I was already in the destination.

I was surprised that Dirk was waiting for me instead of Marina and Pascal. Pascal was coming back from the hospital as he sadly had an accident that day while going on a ride out. Luckily, only the motorcycle was seriously damaged and he only had pain on his wrist. Dirk kindly came to their home to receive me and wait for them to come. As he had to go back to his own house, he couldn’t stay much longer with us. Tomorrow was labor day. For dinner, Pascal took us to a fund-raising barbecue at a local football team club.

The day after, Pascal and I went to Gent. We walked around the historical part of the city and found some curiosities like the “Graffiti Alley”. As we were crossing St Michael’s Bridge, we saw some guys dressed up in traditional clothes. After walking on their red carpet, I spoke with one of them and we realized they were filming a television commercial to promote Namen strawberries. I also discovered that the guy in charge was Belgian married with an Argentinian woman.

The next stop during this week’s journey was Nijmegen. There was no particular need to go there rather than see my little brother. Or so I thought! The city is full of history and one of the most heart touching one, in my opinion, is “The Crossing”. At this location on September 20, 1944, the Waal crossing was executed by the Third Battalion of the 504th Regimental Combat Team. The river crossing was a crucial flanking maneuver that ultimately gave the Americans the upper hand in the battle for Nijmegen. Forty-eight soldiers gave their lives in what is now the shadow of a newly constructed bridge. Every day since 2013, before sunset, a veteran walks from side to side at the pace o the 48 lights set on the bridge. One for each of those soldiers. At the other side of the bridge, once it is crossed, the veteran salutes respectfully his fellow companions in front of a stone with all their names engraved.

After meeting up at his workplace, he spent the whole day trying unsuccessful attempts to make me “love” beer. Unfortunately, as it was raining cats and dogs most of the evening, we ended up watching “Solo” in cinema and eating some delicious “french fries”.