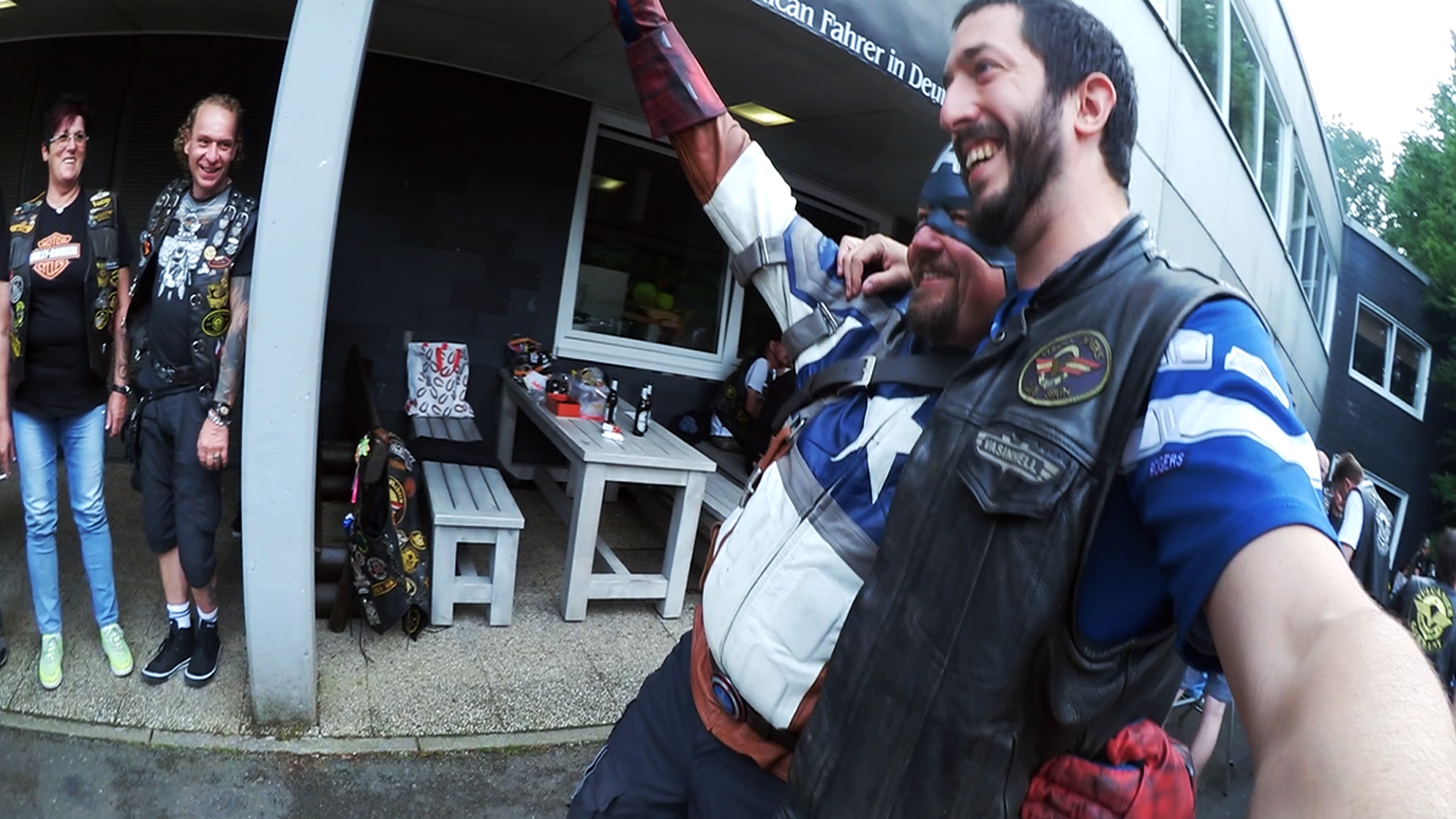 It’s five o’clock in the morning. I just woke up and Stephanie and Hans are already getting prepared for breakfast. We do not have to ride too many kilometers to our destination but we need to arrive early enough to help set everything up for the weekend. Just 140km separate us to Olpe. We soon set tires on the road, just after the rain came to welcome us on our ride out.

There was already some members waiting at the hostel entrance. As soon as we arrived I started to pull out my things off the bike to pitch the tent somewhere. Someone told me that hostel’s prices were not too expensive and that there was probably a free bed as the building was entirely for us the whole weekend. Meanwhile, I left with Stephanie and another Vulcanier member to put all the necessary arrow indicators on the road, just in case someone would need it. This always makes it easier for people traveling without GPS but sometimes signalization is so small that it doesn’t help much. I was so tired from the night before that after a couple of hours later I ran into the baggage room hoping to find a quiet place to rest a little bit. Well, I couldn’t.

With time, there were more people around and the parking area was being filled with Vulcans. Belgium, the Netherlands, and Sweden were also attending this meeting. There were two persons in particular that I was going to see three times in a row. Those are Tinie and John. I met them back in 2013 when Sandra, a group of VOCS members and I drove to Slovenia to our first International meeting outside Spain. The first two years we met only at the Internationals but with time we ended up seeing each other at least twice a year. If I’m not mistaken, I think we met mostly at the Internationals and at the Slovenian anniversaries. They couldn’t attend VN-Biker anniversary party because they had a rough time with their van. If not, it would have been five weekends in a row!

We all spend most of the rest of the day inside the hostel because there was quite a strong thunderstorm. Thankfully, we have decided to sleep inside as well. Nevertheless, Batman and Robin appeared to save the day after dinner. Captain America quickly came after them and started showing off around with Mario. That night I met Petra and María. María was born in Algeciras, Spain, and Petra learned Spanish over the years. It was really a breath of fresh air to stop thinking and speaking in other languages. Hopefully, we will see Petra and her husband Holger again once we reach Munich. Also, Sandra was around to enlight my evening with a couple of deep thoughts and funny moments.

Saturday mode was on the next day. It was so hot that I really appreciated the fact that we were visiting Attahöhle, which is one of the largest dripstone caves in Germany. I remember the guide telling everyone “No, photo! No photo!” and every once in awhile a camera flash lighting whitening the room we were in. I don’t really get this kind of places where you pay to enter but you are not allowed to take pictures. I understand that some things are light-sensitive and there is a no-flash mode on the camera as well, you know? I sincerely think it is just to make you pay again for a postcard or souvenir.

Back at the party, we found Stephanie and Hans. Ok, not the ones I told you before but the ones which I drove with from Limbach-Oberfrohna to Mayen after Vulcanier’s Herrentag meeting three weeks ago. At the parking area, we found Sandra’s and Mario’s motorcycles parked along Andrea’s. The three of them make up the German Tactical Force: Captain America, Bomber and Predator. Andreas is our personal Captain America. The first time I saw him was last year in Denmark where he won one of the “best motorcycle” prices. On the other hand, I met Sandra and Mario in 2016 when I was in Ireland for their first-anniversary party.

Party was coming to an end between Jack Daniels and sausages with Stephanie, Jürgen, Pascal, Dirk, and Giorgio, but the most remarkable part of the evening was when Michael’s granddaughter, Giana, gave me a small present to keep with me on my journey: a lucky dice.