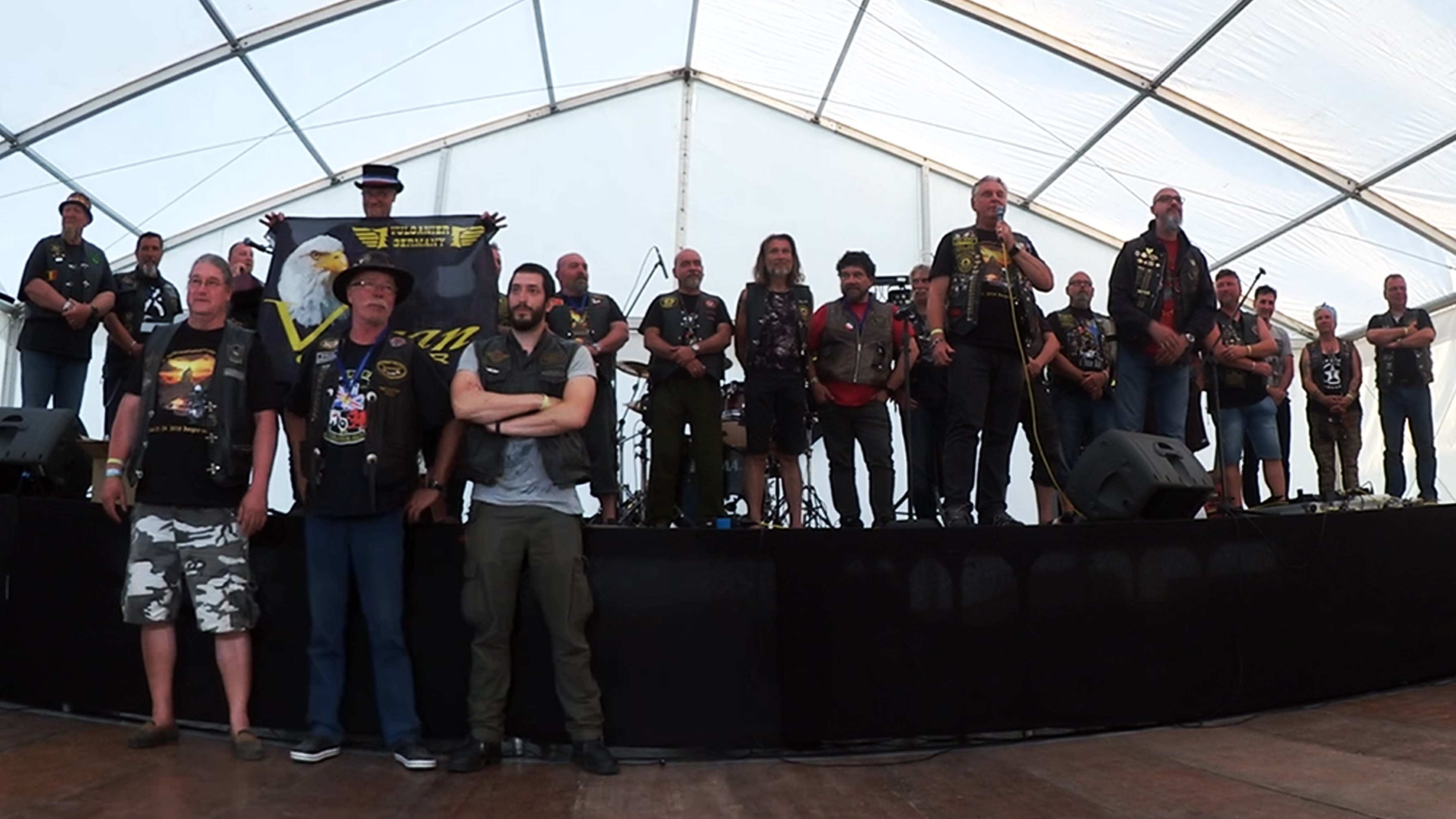 It’s eight o’clock and I’m waiting for Óscar to send me a message that will help me estimate their time of arrival at the mysterious meeting point. It’s been now eight weeks since I left home and I wanted to surprise Sandra somewhere in the middle. It was no secret that we were meeting again. The International Vulcan Rally was booked before I even thought about starting this adventure.

Sandra drove from Madrid to the Basque Country along with another member of our club. They spent the night there with some northern members and waited for others from the east coast. I met the group two days later in La Roche-sur-Yon, after saying farewell to Catherine and Pierre. Unfortunately, Sandra had some problems on the road the first day that made her and Fran being a couple of hours more on the road. For some reason, with vibration, one of the pipes lost both nuts and went out of the bike. They spent some time until they decided to move directly to a garage and repair it. Well, most of it. The pipe joint was completely destroyed and it was not possible to find one the same day.

With a higher decibel exhaust pipe, she made it up to that point and continued farther with us to Isigny-Sur-Mer. We arrived at six o’clock at the campground, right after an Italian group. The rest of our group was already sorted as they arrived the day before in order to do some tourism around the area. The arrival was quite a nightmare as I was the only Spaniard who spoke English, French and some Italian. I spent the first two hours at the camping fixing other people’s issues. Don’t get me wrong, I know the language can sometimes be a problem and I would help as much as I can. But honestly, I would have preferred to have a shower and relax for the rest of the day with Sandra.

There is not much to do in this meeting on the first day. People just take their time to arrive and settle down. Sometimes there are rides out prepared for Thursday and Friday but the main one is on Saturday. It was dinner time when I finally left my things on the bungalow. Getting to the dinner table is also a time consumer. There are a lot of friends I haven’t seen for a year and every step I take there is a hand to be shaken or a kiss to be given. And I stop, of course. And Sandra is always waving at me like “your food is getting cold”. Oh, well.

On Friday, rather than having free time, the ride out was scheduled. Because of some last-minute issues, we missed the departure and went directly to the finish line, Sainte-Mère-Église, due to our ignorance on the directions we had to take to catch up with the group. Along with us, there were some Italian members who shared a coffee with us while waiting. Once the group came, we were all reunited by the Mayor for a brief welcome speech. Sainte-Mère-Eglise holds annual commemorations in tribute to the liberators, including John Steele, the celebrated paratrooper. Many plaques and monuments have been erected in honor of the liberators, such as the zero milestones opposite the Town Hall, which symbolizes the starting point of the path to freedom. In between the masses, Sandra and I got separated. While she was with the rest of the group visiting the military museum, I was walking around and having lunch with some of the French members.

Back at the camping, the President’s meeting was being held and more people were coming. I found Dave, from Ireland, while he passed by before taking his ferry back home that same day. Sandra came back by dinner time as they all went to see Utah Beach. As we didn’t spend much time together that day, we decided we would drive alone to Mont Saint-Michel the next day.

It was on our way to Mont Saint-Michel that we met Helen and Gavin. A nice couple traveling from the United Kingdom with two Lambretta. After having a small chat, we continued to our destination. We arrived there at two o’clock. because we couldn’t find the motorcycle parking area and did a couple of turnarounds before we finally left the bikes. Along with ours, there was quite a lot of other Vulcans parked there. A big part of the attendees was visiting the place at the same time. Unfortunately, we arrived went the tide was low and the picture of the fortress seemed different to me.

Later that evening we joined the party again. After dinner, the International President of the Association picked up the microphone to thank every single attendee and welcomed each country President to the stage. Other Vulcan club representatives were also called forward and so I joined them as I did for six years now.

Towards the end of the night, the sad moment had come. Sandra was going to bed because the group was returning back home early in the morning.  We said farewell to each other, hoping to see us again soon somewhere in the Globe.