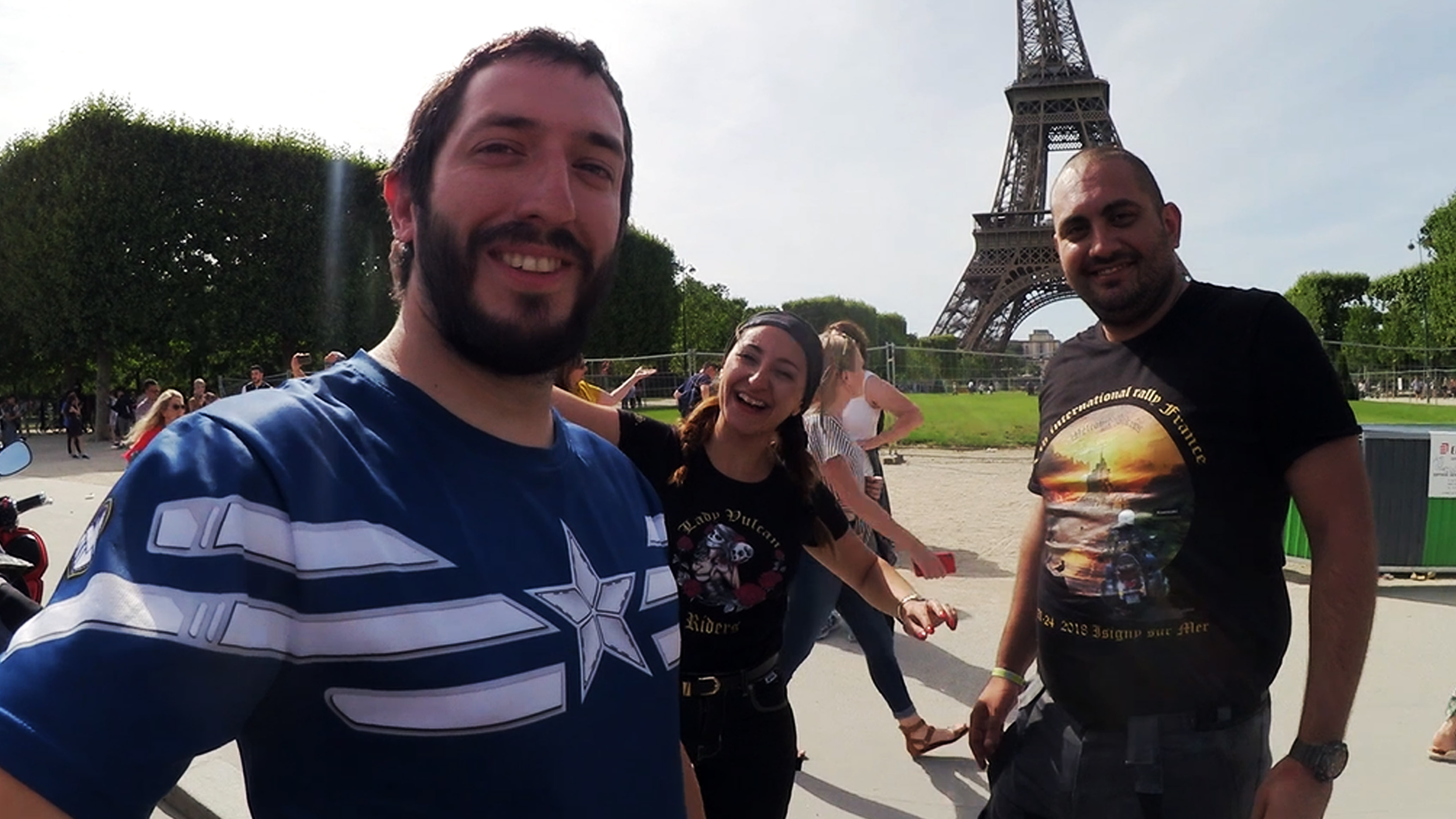 Morning arises and people start to leave the campground. Sandra has already left with the rest of our club and I’m walking towards the party tent to have breakfast. I found Francesca and Christopher there and I join them on the table. They were quite in a hurry as they were going to leave with another group which was already getting prepared to leave. I had my breakfast calmly and went back to the bungalow. When everything was in place, I drove to the entrance to say goodbye to the organizers.

While I was at it, Francesca and Christopher appeared. They got separated from the group and would do the ride by themselves with no hurries. They were also heading to Paris so we decided to share the ride. We stopped at Sainte-Gauburge-Sainte-Colombe for a coffee but somewhere in the middle, I lost my GoPro. Due to vibrations, the camera support couldn’t take it anymore and broke leaving the camera behind. I was very sad to find out about this. It is true that the camera was not new. It was a GoPro Hero2 I bought in 2012 to record my trip to North Cap. Six years and countless kilometers together. Anyways, let’s move forward.

After dancing a little with Francesca, which is a Story Teller and an Entertainer, we continued our way to Versailles. We did not enter the Palace, we just had lunch outside which was also nice. There was a huge mass of people waiting to see it. An incredibly amazing huge crowd. After lunch, we continued our own little private tour around Paris. Our first stop was the Tour Eiffel. Both of my Maltese friends wanted to have a picture in front of it, and so we did it before continuing to Notre Dame. It was Sunday afternoon and it was getting hotter every second. There was a lot of people and traffic. Bad timing to be in the middle of a Capital. Everyone was returning home.

Francesca and Christopher finally went to their Hotel and I left to Carrières-Sur-Seine, where my uncle was waiting for me. I spent a couple of days with him and his daughter. I don’t get to see them a lot. Even if I usually pass by Paris during my travels, we don’t have much time to stay over. I learn this time that my little cousin seems to be a football fanatic. I’m not. We were watching the World Cup match Argentina – Nigeria and she was getting very nervous due to the players game. We almost lost the match actually.

On Wednesday I continued my trip to Stuttgart. This time I was going to spend two days with Sandra’s cousin instead of being at my father’s cousin. I met “Chusa” before Sandra and I even started to date. At that time, she was in Madrid to attend her brother’s son baptism. We were presented by Sandra the night before while parting at a local pub. I seized the time in Stuttgart to look for a new camera. GestyControl contacted me to help me with it but I preferred not to use all their budget on a single camera. I decided to buy a cheaper one and use another part to buy other things as a pair of front brake discs, which I should be receiving in the next days, and save the rest for future repairs.

Chusa and I spent our last night together around Stuttgart. She took me to Sky Beach, a bar located in the city center. You will never imagine what you will encounter there. You just take the elevator and go to the top floor. Once you leave the elevator you find yourself in a parking area. Just turn your head left and there is the entrance. The floor is covered with sand. Music is in the air. Umbrellas and sunbeds everywhere.

I do not like the beaches much. I can’t stand the heat or the feeling of the sun burning my skin. However, this was something different. You can see most of Stuttgart from the balcony, and it looks pretty cool at night.

It was the perfect way to end the day.