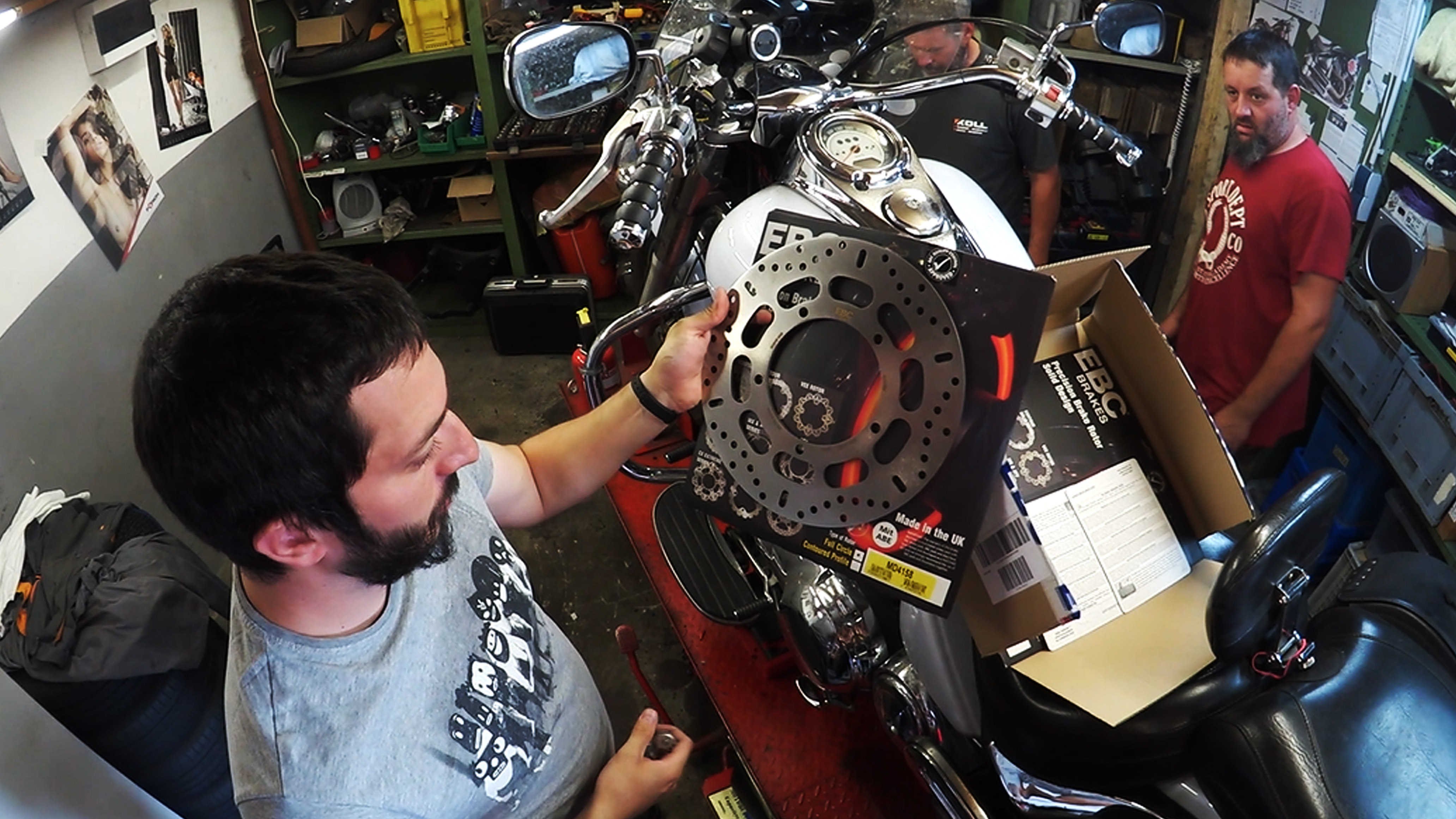 While spending a couple of days in Stuttgart, we received the call from GestyControl. They found out about or small problem with the GoPro camera and wanted to help me on my journey. So we went downtown to look for some sport camera shops to find the best solution for us.  As their sponsorship was not meant for a specific part of the trip, we agreed I could use it for different needs. I didn’t want to spend all the budget they offered in a single camera, so I bought a different one than GoPro which would do the trick for the rest of the journey, and use the rest for spare parts or other checks on the motorcycle.

With 200 km ahead of us, we left Stuttgart. We are now heading to Rodgau to meet Franziska and Detlef. When we were together in Slovenia, a lot of people encourage me to change the motorcycle’s front brake discs. By then, the motorcycle was still with the original ones and with a lifetime longer than 200.000km. Ronnie, from the Netherlands, told me about a  company in the UK that makes brake discs for this model and Detlef offered to help me put them on.  I bought them and made them be sent to his house before I arrived.

I drove the way to Rodgau with no hurry. Detlef was at work and I had about nine or ten hours to get there. I decided I could take some rest every fifty kilometers as I didn’t sleep much the day before. And there I was, trying to get some sleep in some rest area next to the road until three other motorcycles parked aside. We started a small chat together but only the woman of the group spoke English. During our conversation, she asked me if I had ever been to “the biker cave” in the Czech Republic. As I had never heard of it, she showed me some pictures of it and its approximate location on the map. We did not speak much more due to their timing. They had a lot of kilometers left to do and I had a lot of time to spare.

I made the last stop about twenty kilometers from Detlef house and I saw he had sent me a message saying he was already home. Once there, we waited for another two friends to come and share the afternoon with us: Karsten and Jürgen. We all drove together to Detlef and Armin’s garage. Armin is Detlef’s brother. I met Detlef in Malta in 2016, but it was not until 2017 that I met Armin on our way to Sweden. They are both very skilled mechanics and they drive their own modified VN900. While waiting for Armin, we put the motorcycle on the lifter and started to prepare all the tools needed.

The main thing I needed was changing the front brake discs and the brake pads, which were bought by GestyControl, and a piece in the gear lever that Maurice, from Bianchi Service and Maintenance, found loose when I was at his garage. Unfortunately, that was not all. Once everything was in place, the bike was not braking properly. The first issue was that the oil was not oil anymore. It looked like water actually. Even after changing it, it was still not working. Some check were made here and there until they found the problem was on the caliper itself. Three of the four left pistons were completely blocked. It was already too late to find any replacement and my German friend started making some calls and looking on second-hand spare parts websites. There was not much to do that day and we decided to continue looking the day after.

Saturday morning was already very stressful for me. I was not handling well the fact of the caliper not working. My friends were looking for solutions a were completely positive about it. Sometimes I could be as cold as ice, and keep myself strong against adversity but that was not the day. I was out of myself, angry and nervous at the same time. At some point, I just said to myself “fuck it, this is not making any good to you”. As we did not have any solution, we all left to a barbecue party the VN-Bikers were having not so far from there.

It was a small party, with some nice friends having a great afternoon together.