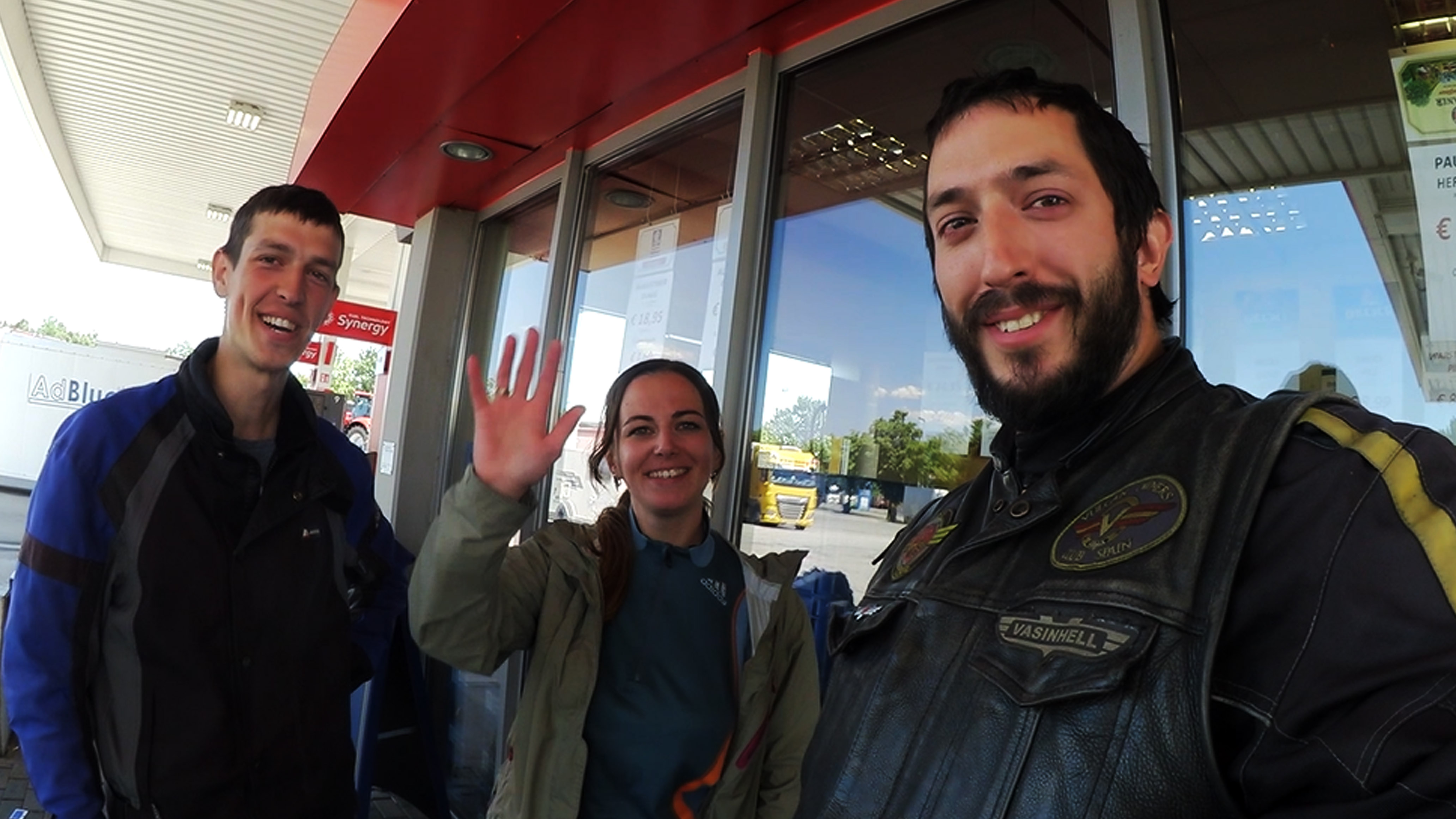 While being at the VN-Biker barbecue party on Saturday Stefan, from Vulcan Riders United confirmed us he had a spare pair of calipers from his old VN2000. I was going to meet Stefan on Monday, but due to this mechanical issue, I had to cross Germany from west to east today to be back on the road quickly. Franziska lent me her VN900 to drive to Regensburg.

It’s been a long time since we haven’t met, so I spent the night at Eliza and Stefan’s house and went back to Rodgau the morning after. Detlef was at work so I joined Armin at the garage and waited for him there. They took the old calipers out, put the new ones and that’s it! It was working again. I can’t thank enough Stefan for lending me his spare parts, to Detlef and Armin for helping me putting all together on the bike and to Jürgen and Karsten for their time. Without their help, I wouldn’t have repaired the motorcycle so quickly. With time, I learned that even if they belong to separate clubs, German riders are bonded together with friendship and respect.

I left Rodgau on Tuesday morning. As I was already with Stefan before planned, I was heading directly to Karin and Helmuth’s house in Vienna. I was invited there during the International Vulcan Rally in France as I was also thinking about attending the Slovak Republic fifth anniversary party that weekend. We were going to drive together, along with other riders from Austria, to the meeting point on Thursday. I had one day in the middle to walk around Vienna and meet Melanie as well. I met Melanie and her father when Sandra and I were coming back from our trip to the International Rally held in Sweden. They arrived while we were waiting to board the ferry in Gedser, Denmark, to get to Rostock, Germany. We shared the time on the ferry and later continued to Berlin together.

On my way to Vienna, I stopped to have lunch near the border with Austria. I was having a pizza at the gas station and suddenly a small motorcycle fully packed and with two persons on it stopped outside. Natalia and Oleg are from Ukraine and they were in the middle of a trip to Croatia. From my point of view, they were carrying much more practical things that I do. Just a different kind of trip, with different kind of needs. After saying goodbye to them, I continued in Austria off the highway. I took me quite a while to get to Vienna but I least I arrived under daylight.

Karin and Helmuth left to work and I went to the city center. I was going to fetch Melanie at work to have lunch together. Unfortunately, she had to go back to work and I played for time around the area. I walked about eight kilometers in two hours around the perimeter of the city center and some of its streets. I just put the automatic mode on and kept walking. I didn’t want to spent too much time on churches or museums, just a quick view of the city while I was waiting for Melanie to go out again. We met again around five and I took her on the bike to her place. It’s been a couple of months since she moved to Vienna and didn’t sit on the back of his father’s bike, which is the same model as mine by the way.

It was very nice to see her again. Since we met we only found each other again at the Italian International Rally, the year after we first met. She has always that contagious smile that makes you feel good. Something I really needed after the past chaotic weekend we had with the bike repairs.