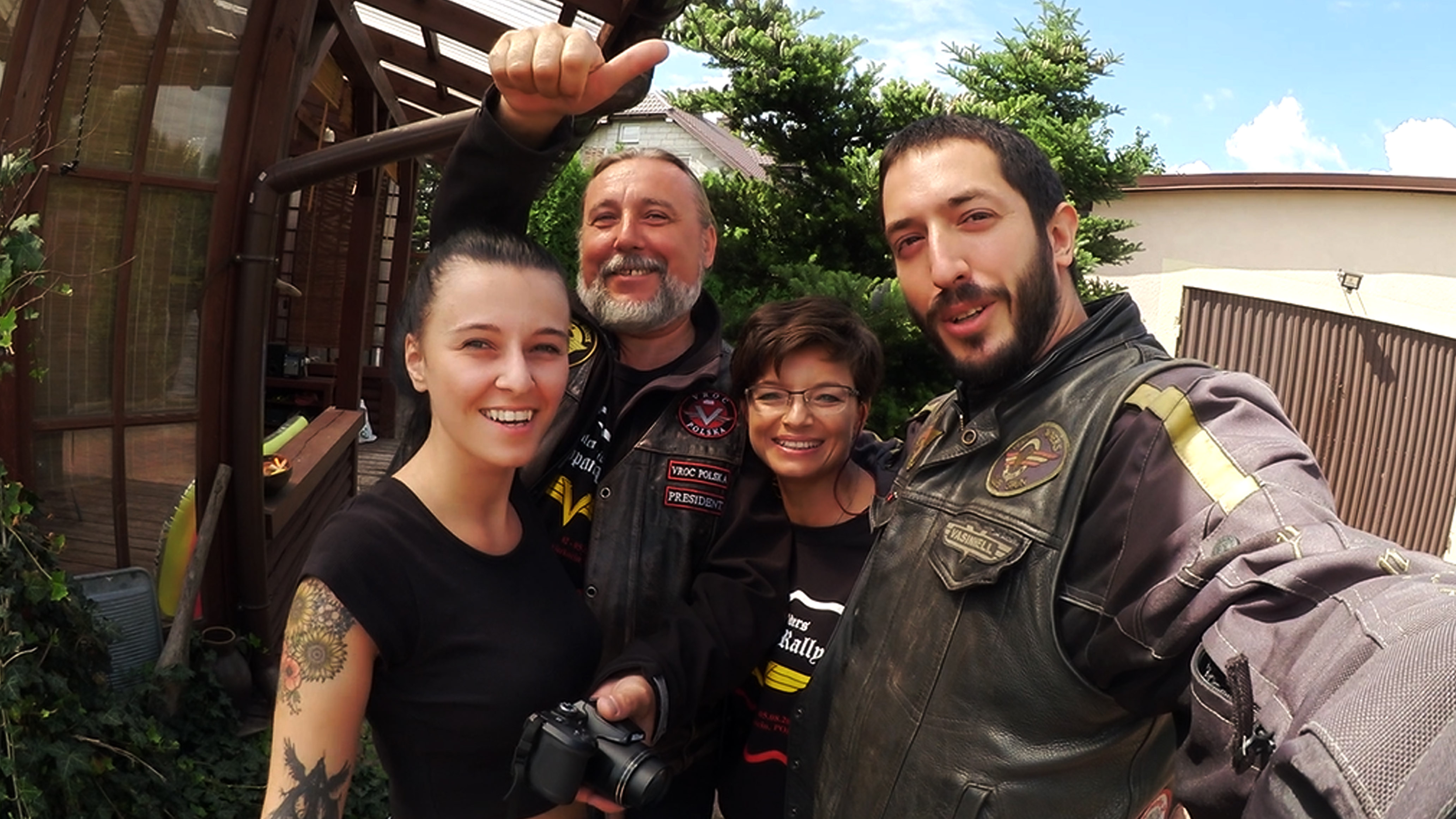 After being three months on the road, I had started to send some emails to potential sponsors. Some could not support the project as they were supporting others at the moment. Once I arrived at the Polish rally, I received an email from Cardo. My problem was that I was on the move, with no long-term address. Sending the product to Russia was not an affordable option so, after a few emails, they invited me to Warsaw. First of all, I needed to have my passport back. It was sent to Krzysiek’s house and it did not arrive before the rally. He invited me home until the visa issue would be solved.

We left the camping area at around two o’clock. Everyone was already gone by then. I spent most of the time with Aga playing ping-pong while her parents, Bożena and Krzysiek, were checking with the owner that everything was ok. On the way to their home, we found some heavy traffic jam. Krzysiek and I were driving motorcycles so we just overtook the line and tried to get home earlier. Somehow, Aga and Bożena didn’t take much longer and appeared just five minutes later. Aga’s explanation was about some shortcut we didn’t take.

Once at home, I found there was an invoice in the mailbox saying the postman didn’t find anyone home on Friday. As it was sent as a certificated letter, I would have to wait until the next day to get it from the post office. It was time to relax and sleep a little more, after reviewing the videos and pictures from the weekend.

Having retrieved the passport from the post office, I bought some new flip flops and headed down to Warsaw to CONTEL, where I would get the brand new Cardo PackTalk Bold. I was on tour with the earlier model which I bought last year. This one has bigger headphones, voice control, and improved software. For the time being, I will only feel the difference on the headphones as I’m driving alone and there is nobody to chat with from helmet to helmet. I must say the audio quality has been greatly improved.

As I was in Warsaw, I met Karolina. Her parents are members of the Polish club and I met all of them during the weekend. Karolina speaks Spanish, which was quite a relief after all these weeks. We spent the afternoon visiting some parks which I couldn’t visit a couple of days ago, and part of the old city. We shared a table in a restaurant to taste the famous dumplings my brother talked me about. They look like small kinds of ravioli to me. After sightseeing, we went to her parents and I spent the night there.

After continuing to Malbork, we all met up early in the morning to say goodbye to each other. I took my bike and headed north. Yes, the same old road I have done twice already. Anyways, I reached Malbork around two o’clock. The first thing I did was looking at the opening hours of the castle, before working on the computer for a couple of hours. The castle was three kilometers away from the hostel I was staying in, so there was no need to ride there.

For some reason, the ticket seller made me wait half an hour, excusing himself saying there were no more tickets with tour available. He just told me to wait for the cheaper tickets. Once in the castle, I tried to visit as many rooms as I could. Being outside waiting for no reason made me struggle a little as I didn’t have much more time to go around. At some point, the castle keepers were kicking people off the rooms half an hour earlier the castle was closed. What can I say?

As I planned to be in Malbork on Sunday, I had to continue forward. I had a Skype call with my mother before I began the last leg to Russia and then I realized that my Visa was not valid until the next week. I had no plan at all but I knew the Finish club was having its party by the end of the week. I contacted my Mika to see if they had any room or place left for me. They welcomed me with open arms and in less than 24h they had everything set up.

I left Malbork and headed to Latvia. I had one place marked to see on my way there: Trójstyk Granic Wisztyniec. It is a place where three different borders meet: Lithuania, Poland, and Russia. It is a little bit tricky to get there with the bike as the road ends and you have to continue on foot. However, I did get the bike next to the small sculpture for a picture.

Just a couple of kilometers ahead, I found the border crossing. The roads in Lithuania are quite good and it was easy enough to get to the other side of the country before noon. Around ten o’clock I stopped at a gas station and found out there was a camping area nearby. It was late but the owners were so lovely and opened the doors for me.