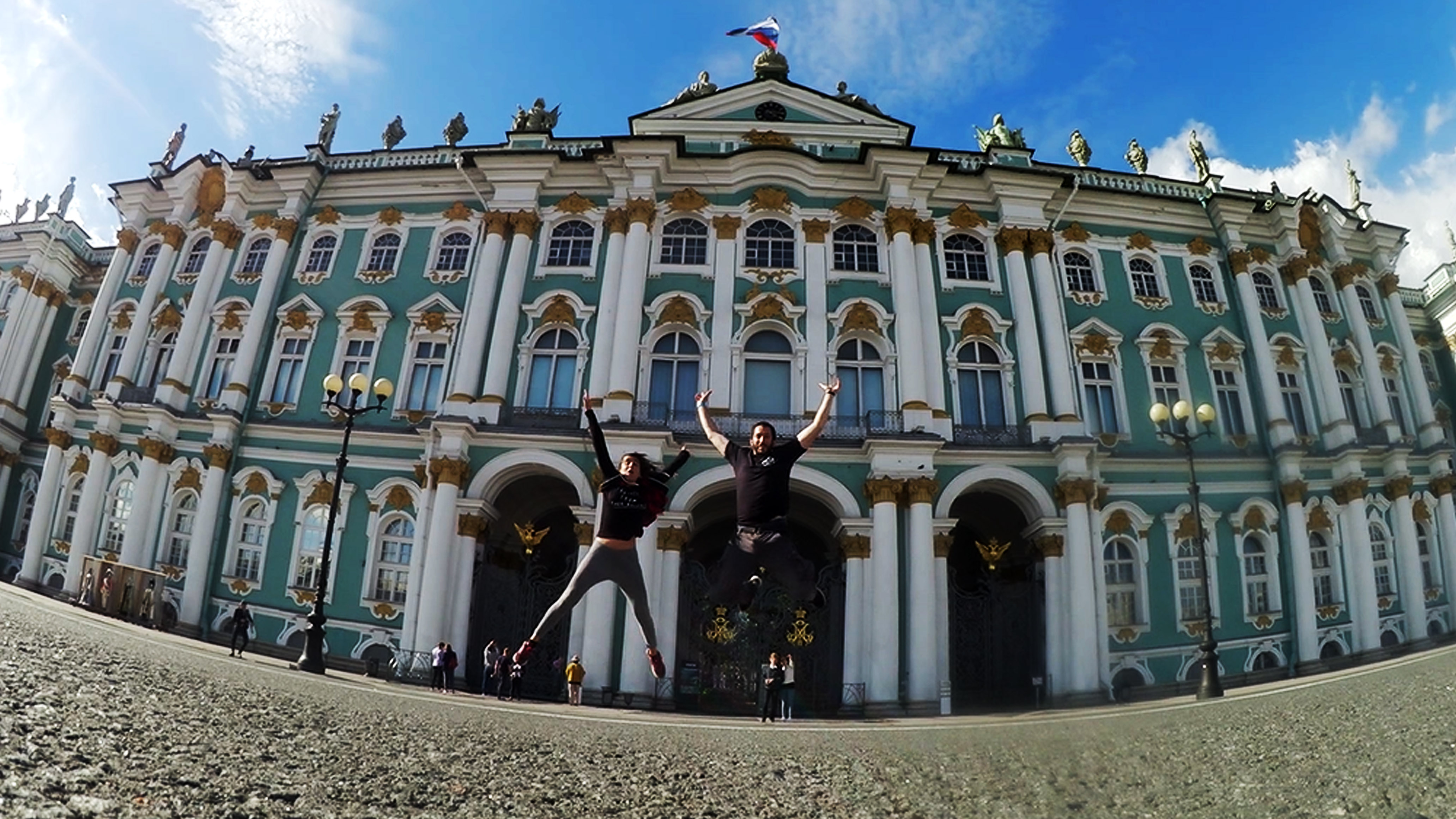 After sixteen weeks on the road, it is time to finally leave Europe and enter Asia. I waited for fo Heidi and Rike, so we could drive together. It was a rainy morning and the sky was quite cloudy. Therefore, rain suits were mandatory. We stopped for a coffee where the road met the highway. A couple of minutes later, Vitto and his wife appeared and joined us for the rest of the ride. We drove all the way to Helsinki together and then Rike drove me to the other side of the city.

I achieved the border with Russia around two-thirty and crossed in ten minutes. I couldn’t hold myself as many people told me I was going to spend at least four hours there. Well, one kilometer later I realized it was only the Finish “exit door” and run into a long line of cars waiting to pass the first control. I overtook all the line and found out that the first control is just for limiting access purposes. As I was on a bike, they let me through. Then my first long border crossing experience began. I found myself on four lanes checkpoint where everyone was leaving their cars parked and walked to a single-window where there were only two persons taking in the documents. This was the first point of Passport control and where I received a small paper, which I guess only meant I was waiting there. Then I had to walk to another window to ask for the forms I needed to fill. While I was filling up the forms, another officer came and asked to do the customs control. I had to take off my luggage and open all bags. Meanwhile, the officer checks the passport again, why not? Let’s say that is a double check. Once the form is completed, I go back to the second window to get all the documentation ready. Can you guess what’s next? Passport control! Yeah, fine.

After an hour and ten minutes, we were ready to go. Oh, wait! Another guy in the uniform is asking the Passport again before you even think of crossing the barrier. That’s a total of four Passport controls.

Around seven o’clock I was in Saint Petersburg. Unfortunately, as I set foot on the city the sky broke in a thousand pieces and heavy rain just fell over me. The rain was so strong that some areas started to flood around the gas station where I managed to stop very quickly. After waiting for half an hour for the rain to soft down, I headed to the hostel. It was very strange as the hostel entrance was on a block’s central courtyard. They opened the door and there was no sign to know which would be the door on which I had to continue through, nor the people in the small business nearby knew about it. After ringing again because I needed them to open the garage door, someone appeared.

While I was registering myself, Ainhoa arrived. I kept contact with her as she told me she was staying in Saint Petersburg around the same dates I planned for myself. We caught up a little bit on our trips as this hostel was much quiet than the one in Tallinn. That same night, we went out with Maria, a Russian girl self-declared in love with Argentina and who was recommended to Ainhoa by another traveler couple. Maria takes people on guided tours around the city as a second job, as well as a hobby. That time, she took us to a bar nearby where we could drink Fernet, a very popular drink in Argentina. It was funny because the barman didn’t even know he had that on the shelter. It was a great night with live music and other strange Russian things as seeing someone on a horse offering people a ride around the city.

Ainhoa offered me to act as a guide and our first task the next day was to visit the underground stations in Saint Petersburg, which exhibits many typical Soviet designs and features really nice decorations and artwork. It is one of the most attractive and elegant metros in the world. Going back to Ground 0, we found Saint Isaac’s Cathedral with a pure gold-plated main dome which rises 101.5 meters. Later on, we moved to New Holland Park, a historic triangular artificial island from the 18th century. We stepped in the Naval Prison, built in 1828–29 and refurbished for galleries and a museum, for lunch. We entered a Georgian restaurant and had a funny experience with the quantity served. As we didn’t know what we were asking, we didn’t have a clue on what we would receive.

That night we looked for information about the boat which navigates on the Fontanka River down to Neva River. The goal was to see the opening of the Palace and Blagoveshchenskiy drawbridges. It took us a while to find a boat with a convenient price, although all of them were more expensive than what we were told before. We chose one and the ticket seller couldn’t believe we wanted individual tickets when there was an earlier boat with a “romantic option”. For some reason, this ticket was cheaper buying it as a couple and the tour included a saxophone player during the ride. In the end, we bought it. It was quite cold and we had rainy weather. Once the tour ended, we waited for the first drawbridge to open and then moved to the next one. It was very clear that was a tourist attraction as there were tens of boats around.

The morning after, I left on my on to the other side of the city to meet Kirill, a “Friend” member of Vulcans MCC Russia. My recentñy new friend Sergey, who I met in Slovenia, put me in contact with him to help me figure out the road and checkpoints where I should go through. I crossed Peter and Paul’s Fortress but I didn’t have much time to spare inside. Most of the doors led to a ticket office and the Cathedral, which is the main attraction, has a huge number of people waiting outside. It is the original citadel of St. Petersburg, founded by Peter the Great in 1703. Today it has been adapted as the central and most important part of the State Museum of Saint Petersburg History. Once I met Kirill, we went for a walk and he asked me about my plans. He started making some calls to other members in Moscow to give me some advice later on. In the end, the most important message was: “Don’t go crazy, winter is coming”.

Kirill had to go back to work and  I had to meet up again with Ainhoa at the Winter Palace entrance. Getting a ticket was a mess. A lot of people in line to get the cheapest ticket available. After complaining for half an hour, I told Ainhoa we better get the ticket from the machine and get access to all the museum. Once we bought it, Ainhoa started walking with the ticket on high and got us through the security control in no time. The Winter Palace opened on 5 February 1852, was rebuilt after eleven years of architectural conflicts being the first art museum in Russia. I really enjoyed the museum, although there was another reason I was there that day: my mom. A few days before my arrival in Saint Petersburg I received an email from my mother asking me to see Rembrandt’s “Return of the prodigal son” and give it her respects.

Does the painting thing have something to do with my journey? Who knows…