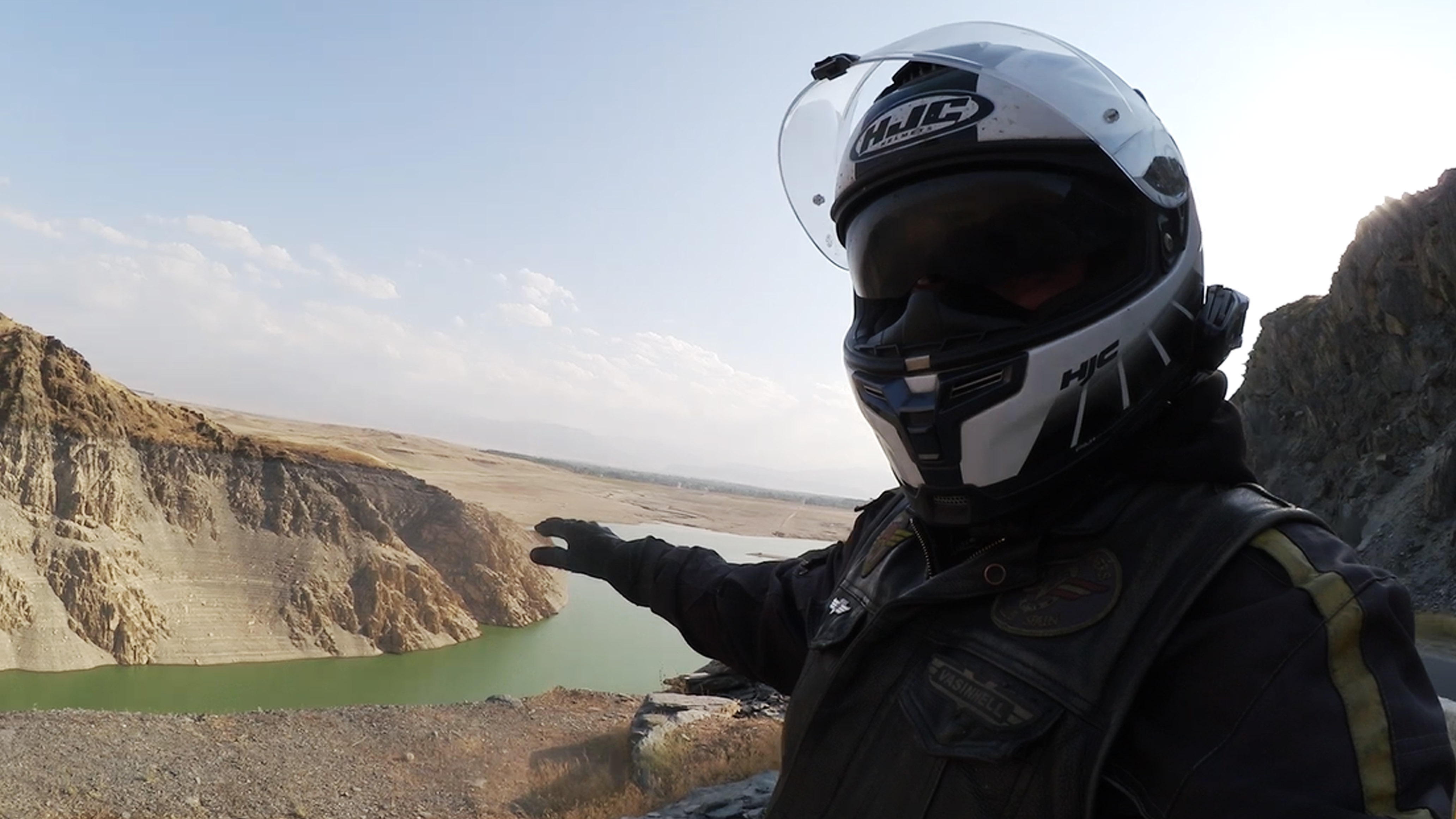 Our destination today isn’t quite far but it will take us some time. We started our day left-footed as I waited about an hour for someone to appear and open the “garage” door for me. I mean “garage” as it is a closed terrace area which seems to have no use at the moment. There was no one around and nobody seemed to know who was in charge of it. I didn’t have much time to spare, so I prepared everything and waited “patiently”. Fortunately, by nine o’clock we were ready to go.

Four hours on the road, and two hundred kilometers later, we made it in Taraz. We drove aside the natural border with Kyrgyzstan all the way to this city. Kazakhstan is pretty flat and at this point, you could admire the evolution of nature. There are more than three thousand meters between us and the summit of the mountains. During the ride, I kept finding gas stations which looked barely new and with some nice facilities. Those kinds of places where you think you can finally find a so-called “normal” toilet. Well, there isn’t. For some reason, even in the newest restaurants, gas stations, or buildings aside from the road, it is very difficult to find another thing rather than a fenced hole.

The clock was ticking. It was almost two o’clock and I was almost leaving Taraz when a 4×4 car overtook me and someone from the inside started waving at me. I stopped on the hard shoulder thinking that something was wrong with my bike. A man, Alek, and a boy, Otabek, got out of the car and came towards me. Alek started telling me it was lunchtime. As I was not aware of what was he proposing, he insisted and asked me if I had had lunch already. I told him I didn’t and he told me to follow him always under the same motto: “it’s time to eat”. I was not really sure what to do about it, but I left myself move with the flow.

Following Alek and Otabek home was a nice experience. The house was huge. Alek showed me around a little bit while Otabek and his brother were preparing the table. We had a very nice meal where I tried to satisfy their curiosity about my journey. I must say I was quite tired because it was very hot at the moment that even Alek offered me a room to rest. I was afraid to pass out on the bed thinking about all the kilometers left I wanted to do, plus the border crossing. Alek did go to sleep so I stayed with Otabek for about half an hour. During that time, he showed me almost all the plot. The house extension was far larger than my eyes could see. They have a small circuit to train racehorses, a large orchard, a warehouse where they restore old vehicles, a large garage to do the maintenance of some 4×4 race cars, and an area similar to an industrial workshop to build their own parts. That was simply amazing, but the fact of finding something similar to a small private zoo inside was astonishing. Within the animals, I saw deer, geese, partridges, pheasants, pigeons, and ducks.

Once at the border control, I found despair. Not because of the number of people, nor because of the time the officers took, but due to the numerous persons skipping the row. It seems that having a truck is enough to make the rest wait even more. Officers don’t care much but the thing that surprised me the most is that the rest didn’t argue about it. It was a hard time for me as I didn’t expect to see such impassiveness in people. It was even harder to take the drama these skippers made every time another one skipped them. After forty-five minutes I was finally on the other side. With some local currency with me, I continued.

Kyrgyzstan is a country where 94% of the territory is located above one thousand meters, and 40% of it is above three thousand. In spite of everything, agriculture and livestock constitute more than half of the employment of the active population. As I read somewhere, shepherds do not move horizontally across the steppes but vertically. You can find them walking the livestock on the road, forcing vehicles out of it to get through. These are the small special moments you can have on the road. Although some shepherds don’t care much of the traffic, most of them try to blaze a trail for you.

I stopped in Talas to look for a place to stay but the price was too high that I decided to continue a little farther. Somewhere in between Talas and Cheleke I found a container aside from the road and camped behind it. It was a good place to have a tent away from the look of curious people, and the container will help us shade from the car lights. When I was having dinner, a car stopped and approached me. It turned out it was just the owner of the container and he was afraid someone was trying to open it. So, with granted permission, I stayed there.

I woke up very early and drove towards the Talas high pass. Not too far from the crossroads with the road between Toktogul and Biskek, I found a man parked on the hard shoulder. He thought he was out of battery and we tried several times to start it up with mine but it was not possible. After a while, we realized the water reservoir was empty, so the owner ran to the flowing river a hundred meters from us to get some. Meanwhile, someone stopped. As in Russia, there is no such-called “car assistance”. You are basically on your own and you can easily find cars and trucks being pulled by other vehicles on the road. This other guy tried to run the car with his battery, and after a lot of effort, the engine started. Unluckily for the assisted car, it was not enough as it was parked again a couple of kilometers away.

Riding Toktogul’s Lake area was as hard as hell. Not because of the road, but due to the heat. There were about thirty degrees and no shades on sight. I found a rest area after three hours, just after Kyzylbeyit’s tunnel. At least they had some food and water I could but, again, no shaded area. I arrived in Osh around six o’clock and stopped at the first hostel I saw announced with a Wi-Fi connection. Well, there was no such thing there and I had to go to a grocery store three times to finally get my sim card working. Firstly, the sim card was for free, then it was not. The rate was ninety Som, but after paying for it twice I found out it was a hundred twenty.

I stayed two days in Osh catching up on my work with no time to see the city at all. I must say I was really pissed off with the phone issue that I didn’t want to go out. I continued to Kodjent on a mostly very bad road due to road works. I almost lose my camera again because of the vibrations the bike is exposed to in these situations. The best part of that road was the numerous small villages where I found traditional “Самса” vendors.