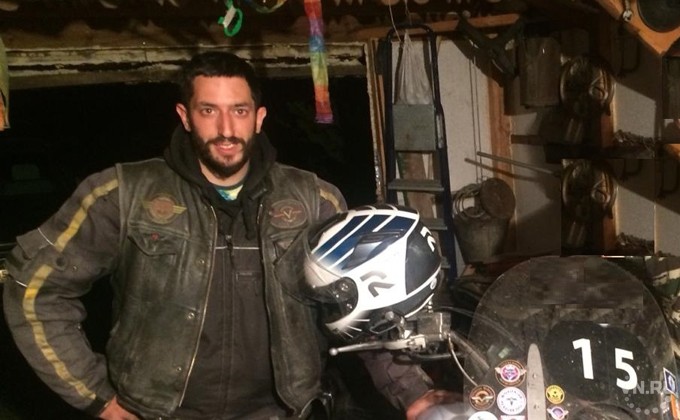 The biker from Spain spent the night in Krasnozerskom and then set off again. The motorcycle of the Spaniard making a round-the-world trip broke down on the highway near the Krasnoyarsk Novosibirsk region. A local biker came to his aid, providing him with overnight stay and repair of his iron horse. The bikers communicated with gestures and through the translator in the phone.

From Spain through Kazakhstan to the Far East, the Spaniard Julio was doing a world tour when his motorcycle broke. A local resident, biker Sergei Menyajlov, found out by telephone from his Kazakh friends, whom Julio called. At five o’clock in the evening, throwing all the tool cases, the red-haired rushed to the track to help a like-minded person. Ten minutes from Krasnoyarsk, on the highway, he met with a Spaniard, a man of about forty. From nine o’clock to two in the morning the breakage was finally eliminated. Fully restore failed as it already needed a major overhaul.

“Julio did not understand the Russian language, and I did. We communicated with gestures, sometimes through the program-translator in the phone. We repaired the motorcycle, but I didn’t let him go right away on the road. I offered him to relax, wash and eat. He spent the day with me and then went to Novosibirsk.” said biker Sergey Menyajlov to VN.ru.

Already at home, talking, Sergei learned that Julio spent more than five months on the road. He drove from Spain to Kazakhstan and successfully crossed the border with Russia. He planned to reach the Far East, and then return to Spain.

The brotherhood of motorcycle enthusiasts watched the traveler: they were already waiting for him and, as soon as he was sent on the road, they transmitted information to those cities through which the Spaniard was to pass. And this attitude is not only to this traveler but to any traveler on a two-wheeled vehicle.

Bikers met him near Novosibirsk, but the fighting “horse” let him down. The traveler left the motorcycle in Siberians, and he flew away to his homeland, in Spain.

Since childhood, Sergey was fond of technology, his father gave him the Planet 3 IZH, and at the age of 12, he allowed him to use two-wheeled vehicles, but not on public roads. Drove as a teenager along country dirt roads. The farthest journey on his motorcycle in Krasnoyarsk.

In his area, he often takes biker travelers, but for the first time, it was a foreigner. With the brotherhood of the country, he has friends from nearby countries and communicates with them. In Krasnoyarsk, his support was given to about ten people.

Julio has already sent Sergey a video about his trip to Kazakhstan and promised to make a video about the short way through the Novosibirsk region in the near future.