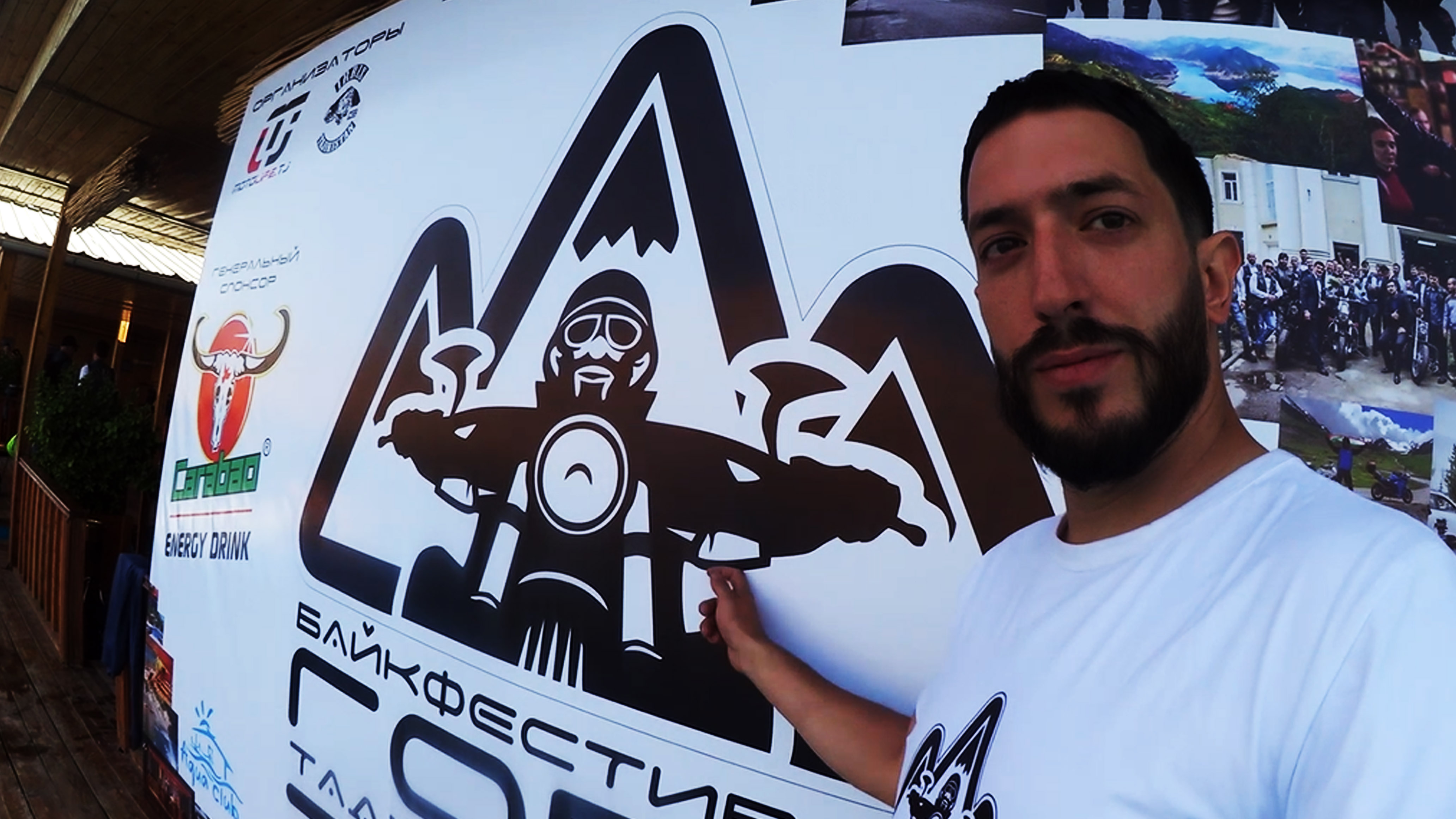 Today it’s finally the day we are moving to the festival area. We were summoned early in the morning to participate in a ride around the city. Something like a parade showing off our bikes to the citizens. Артём went to the biker post to check some electricals problems on his BMW GS. Evgenya followed him and I went directly to the meeting point next to Varzob river. When I arrived there was no one there. I wasn’t sure if it was too early or the rest kept partying until very late the night before. After ten minutes, other bikes appeared. Some of them were the guys from АВТО – МОТО ФЕДЕРАЦИЯ ШЫМКЕНТ I have met a couple of weeks before.

Later one, the police came and so did Evgenya and Артём. We started the ride around the city before reaching Uchastnikam Vov’s Memorial square. A military marching band was waiting for us and soon a ceremony in memory of fallen bikers began. A speech was made to thank everyone and the music started again to accompany the flowers offering around the Eternal Fire. We had a small snack and continued to the biker post. We then had a timing problem and if we would like to be at the festival we needed to leave as soon as possible. Артём was having problems with his bike again and it was not possible to keep the engine running. We were running out of time and he was offered to come with us on a car and leave the bike in Dushanbe. The mechanic would look after it on Monday.

We rode about seventy-five kilometers to get to Nurek. As the party was being held in a restricted area, we had to leave the bikes outside the city at someone’s house. I’m not sure but I guess this guy was somebody’s friend in the organization. We waited for someone to fetch us for quite a long time. We didn’t know why they were taking so long until they arrived. We hopped in some vans and drive for about ten minutes to the control point. Our passports were checked one by one until they let us through. This is a restricted area as its primary purpose is hydroelectric power generation. The reservoir formed by the Nurek Dam, known simply as Nurek, is the largest reservoir in Tajikistan. We drove another fifteen minutes to the dam which was on top of the mountains and found a boat waiting for us. Another thirty minutes sailing in the reservoir and we arrived at Auqva Club.

We could say we were in the open sea. At least it felt like it. Water surrounded us and there was no possibility to leave the restaurant without a boat. The club was separated in two areas, having the rooms and the biggest party area on land, and the restaurant and water activities on a wooded islet. Some of the activities we had were water scooter related. A small solarium and some trampolines were located on the larger reservoir side of the islet. Music was on, and a kind of trampoline jump contest was going around.

The night came and it was time to move on land. The party was held around the swimming pool. The bartender was doing some fire tricks and people danced all night long. Фируз thanked all the attendees and I said a few words myself while Alex and Булат were playing with my camera. After all, it turned out to be a funny clip.

Anyways, at this point, I was far enough of what I have planned for my trip. Entering Kazakhstan was going to last only a week and I would be riding the north of the country. I met Evgenya in Kostanai and that made me change everything. Now I’m in Tajikistan, a place I have never thought about visiting, surrounded by wonderful people from Uzbekistan, Kyrgyzstan, Kazakhstan, Tajikistan, and Russia. I’m riding across an incredible country full of nature and this is just the beginning.

Pamir, I’m coming for you!