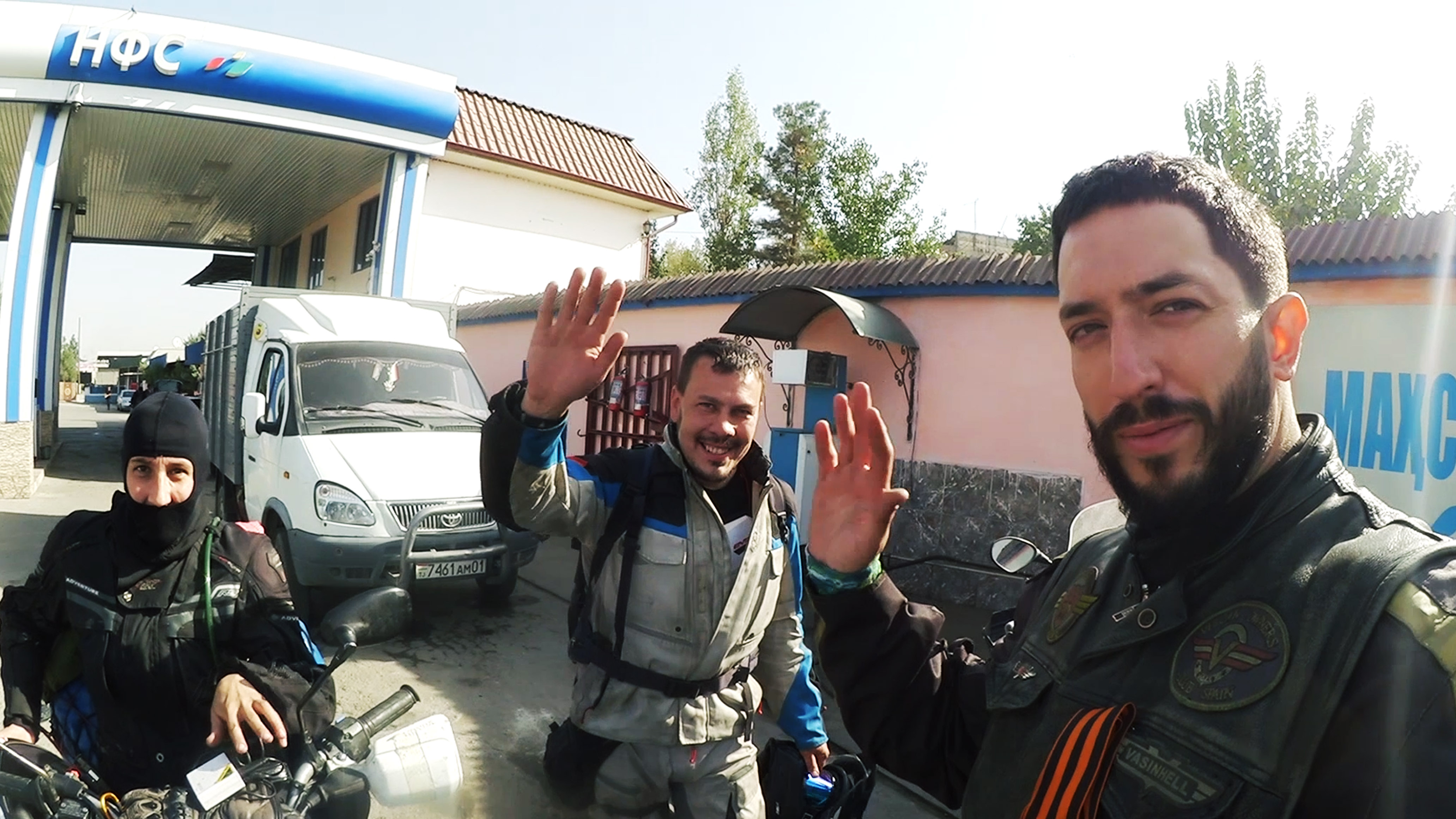 Party is over and it is about time we drove the Pamir Highway. But first, we head north back to Dushanbe as Артём’s bike needed to be checked. Some other bikers were staying in the city that night and stopped at the biker post as well before continuing. Артём had his problems with electrics, Evgeniya had her air filter full of oil, and I had a small displacement on the rear axle. At least, that is what I thought. While both of them were dismantling their motorcycles, I bought something for lunch in the restaurant on the other side of the road. After four or five hours, after trying over an over again to have Артём’s bike started, he managed to make it work. Evgeniya had her air filter washed, or changed, I really can’t recall. I got my problem fixed as well with the help of a lifter I was offered from the biker post. There was a couple checking the bike as well. Katerina and Pavel were driving to Pamir from Bielorussia. Evgeniya agreed with them to drive together on the “hard road” while I would go most of the first leg on asphalt.

Before the nightfall, we stopped at a supermarket to get some food. We were not continuing to Pamir. At least, not today. It was very late and Артём proposed to leave the city and sleep in the wild on some beaches he saw on the map. After driving for a while and asking police officers for directions, we found there were not such beaches. We then decided to drive a little bit overland and spent the night under the stars in the middle of a crop field. It was getting colder with each passing day and we tried to light a fire. Unfortunately, we couldn’t find anything but very small branches which could only be used to make a nice picture with Артём’s camera.

That was our last night together. The next morning we said goodbye to Артём as he was going back to to the biker post to double-check everything again. Evgeniya and I were driving to Pamir. I drove with Evgeniya almost to where the bikers festival was held and took different roads after Vahdat. I was taking the southern road to Kulob while she would be driving east. Our meeting point was set on Kalaikhum, and we should reach it by the end of the day. I drove past the Nurek Dam and found a small market area on top of the mountain. The views of the seventy kilometers long reservoir from there are incredible. While taking some pictures, I was quickly surrounded by locals offering their products. One of them had a small stall of fruits where he made instant juice from them. I was offered some pomegranate juice and had a small chat with them. They went crazy when I took some stickers out of the bike and started distributing them. I took what I think is the best picture of my trip to this place.

As I was getting closer to Kulob, the asphalt was disappearing and began to be irregular. The road was changing from asphalt to some kind of melted stone pavement and back. Maybe for twenty meters, maybe for almost a kilometer. Before I reached Ноҳияи Шӯрообод, I found my first GBAO control point. When I saw the sign, I feared the worst. I could clearly read “Passport Control” and I was afraid I was leaving the country. The border with Afghanistan was just across the running river at the bottom of the cliff. This was the first of a series of checkpoints located along the Pamir Highway. As you need a specific additional permit attached to your visa, they make sure you keep on going and you don’t stay somewhere in the middle. GBOA is in Tajik territory, but the Chinese, Russian and Afghan governments divided Badakhshan for many years. This area was also declared independent from Dushanbe during the Civil War in 1992 by the local government.

After this control point, asphalt appeared again. The officers told me the road was good up to Kalaikhum. They were right about the first thirty kilometers. After that, asphalt was completely gone and we would be riding a couple of days before we even see its trail again. Later on, I reached another checkpoint where I was told I was about seventy kilometers away from today’s destination. I was not sure how long it was going to take to get there as I was driving no more than thirty kilometers an hour. It was getting dark and being surrounded by mountains was not helping at all.

I arrived in town around nine o’clock. I didn’t have any lead on Evgeniya’s ride but it seemed she didn’t make it this far with Katerina and Pavel. As I set foot on the ground, a bunch of kids came to say hello while others were offering homestays. After waiting for half an hour, I decided to stay in town rather than sleeping aside the road. As usual, the homestay said there was internet but there wasn’t. Instead, the meal was quite substantial. The fun fact here was that I ended up sleeping in the same homestay Kinga (On Her Bike) did without even knowing it in advance.

As the following days were going to be tough, I washed my clothes, worked a little bit, and took a shower. It was time to rest.