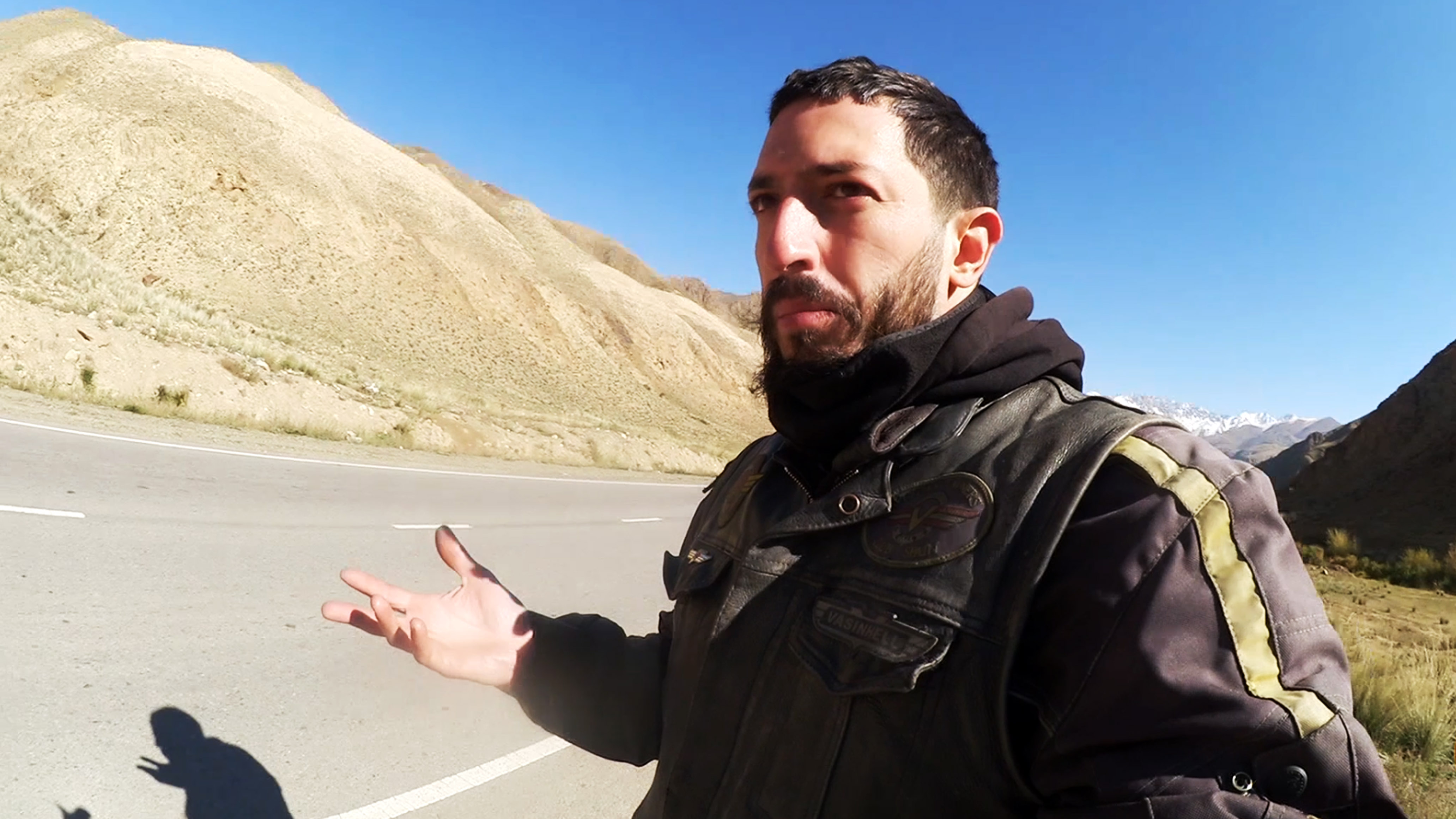 It’s seven o’clock and the sun is rising on the horizon.  Temperature is low but I hope that it will change as we drive out of the country. Yesterday evening we spend the night at a local’s as he invited us home after seeing I was not finding any place to stay. He gave me something for dinner and offered me to try horse milk. I was told this has some alcohol in it. I’m not sure if it is originally like that or they process the milk somehow giving it that characteristic later. What I can tell you is that it was extremely sour to me. It was the first time I tried it but I not sure if I would ever give it another try. It is a “no” for me now.

The way to Naryn was a stone road for a couple of kilometers. After that, the good old asphalt would join me again for the ride. On the road to Nadyn, I found myself surrounded by large groups of horses. Looks like we are all going in the same direction. A sense of freedom fulfilled me when driving among them.

I reached Naryn at 9 o’clock. The weather didn’t seem to change much after I left Ak-Tal. Maybe it is due to Kyrgyzstan being a high elevated terrain country. Additionally, I was surrounded by mountains and the temperature lowers during dawn. Now that the road was completely made of asphalt, the average speed went up to a hundred kilometers an hour. I had to stop a couple of times to warm up under the sun because I was freezing myself driving above three thousand meters in the morning. When I checked my telephone, the weather application said there were three degrees. I hope the temperature will not drop down anymore as I don’t have winter clothes with me, rather than a jacket and thermal clothes.

I arrived at a crossroads where I had to decide which way to go. I thought I needed to ride up to Karakol’s lake to turn around and continue my way to Bishkek. I found out I was wrong. Continuing to Karakol would make me drive more than two hundred kilometers I could avoid doing. That was worth two to three hours of my time. The time I obviously needed as I saw my rear tire was running low on profile. I should get to Almaty, Kazakhstan, minimizing time and distance if possible.

Near Bishkek, I found some other border crossing offices, but the signs indicated it was only for Kyrgyz and Kazakh citizens. I stopped at a gas station to have lunch before entering Kazakhstan. This way, I would have my belly filled while waiting for the officers to let me through and there would be no need to stop again on my way to Almaty. While I was having lunch, a small group of Chinese people was refilling their car. One of the girls approached me with curiosity and asked about my trip. I gave her some stickers while chatting, and she went back to the car to get a present for me in exchange. She gave me “Sama”, a blue plush doll. I’m not sure if that is its name or just the way they politely refer to someone else.

The border officers did a special check on my motorcycle this time. It was the first time I had been inspected with dogs on this trip. I guess it had never happened to me with the motorcycle anyways. They spotted my low-profile tire and accepted it when I told them I had one waiting for me in Almaty. In fact, I didn’t have one, but I had the address of some places where I could buy one. With no further interruptions, I entered Kazakhstan.

Not too far from the border, I run into some horses crossing the road. One of them had its front legs tide up. The image of the camels I saw the first time in this country came up to my mind. I did nothing for that animal back then and maybe I could do something about this one now. I turned around and left the motorcycle on the hard shoulder. I followed the horses down to a tunnel beneath the road where they were protecting themselves from the sun. At that moment the heat was going up fast. I didn’t find in the tunnel just the five horses I saw on the road, but approximately a total of thirty. All gathered together. It took me a couple of minutes to figure out which one was the one I was looking for. I got on my knees with my cutting tools and went for the rope. Anyone would say that was not the best idea. A single bad move and the horses could rogue and hit me seriously. When I cut the rope they did get a little nervous, and so did I. Fortunately, nothing bad happened and the little fella was now free from its chains.

When I got to Almaty, I went directly to the tire shop I was indicated. Guess what? It was not a tire shop but a second-hand car parts and tires market. What was even worse was the fact that I needed to pay a hundred Tinge to get in. It was not that much but I didn’t have any local currency with me, no sim card on the phone, and there was no way I was going to buy a second-hand tire. I changed my plans and went directly to the hostel. Hopefully, I could get rid of the luggage and look for a place to buy a tire easily. It was not the case as no one could tell me where to go. I was going to meet Zohan in town and went to get some local currency.

When I got back to the hostel, I found other travelers as well. One of them had a compressor and helped me pump up my rear tire. Since I crossed the border it was quite low on air. Why? Because the fix we did in Pamir broke and the air found its way out of it. There was obviously not much I could do. It was ten o’clock already, the tire was flat and with no profile on it. Let’s see what tomorrow has to offers us.