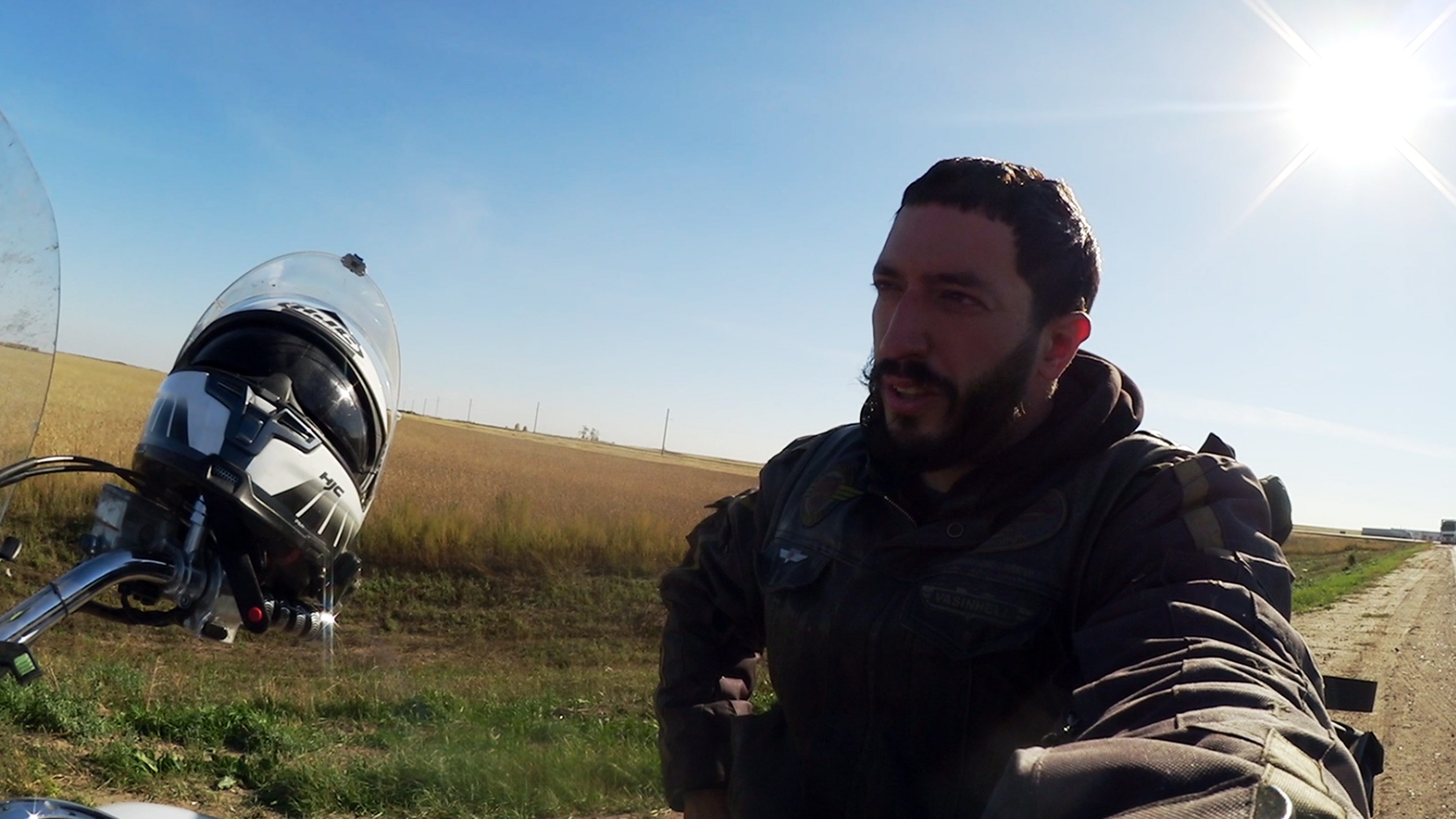 I woke up early in the morning to be the first customer entering the tire dealer shop. I walked about two kilometers from the hotel to get to the one which has the earlier opening hour. I entered the shop and asked for the measurements I needed. When they asked if I wanted four of them I told them I just needed one because the tire would be put on a motorcycle. Oh, I forgot to mention the tire I was looking for was a car tire. It’s been a couple of years since I see pictures of other riders driving with a car tire on the rear. The so-called “Darksiders”. I was hoping to get to the USA to do the same but destiny offered me the chance to do it in advance.

On my way to the tire dealer, I saw a bunch of tire mounting shops and a mechanic. They were closed at that moment but when I got back to the hostel I could meet them and ask if it was possible to help me change the tire. The mechanic was looking at me as if I was not serious. I did not have any local sim card and had to use the offline translator to Russian. Almost everyone in these countries understands Russian. After a little while, he told me I could your his tools and we could put the new tire on the rim with the help of the others.

When I got the motorcycle the tire was completely flat. It was quite complicated to get it out of the parking area and drive two hundred meters to the mechanic shop. The shop only had one proper car lifter and I didn’t want to block it while we were at it so I was given two small hand lifters for cars. I can’t express how difficult it was to get the bike stabilized with that. I am used to a platform lifter and not to those car lifters that only holds a single point on the frame. Taking the wheel out and changing it was something easy. The tire was in very bad shape. All that driving over a stone in Tajikistan and Kyrgyzstan covered it entirely with small sharp cuts. For some reason, on the inside something similar happened. Until now, I still don’t understand how it got damaged there. As always, having the tire back on the motorcycle was delicate work. The rear caliper has to be precisely inserted into position and it always gets messy.

It was twelve o’clock by the time the tire was replaced and the luggage on the motorcycle. Rush hour time and hot weather. Getting out of town was a hell of a nightmare. The two hundred kilometers were in very bad conditions. I don’t understand how the roads look like a million tanks rode over them. I am driving with a car tire now and it is even more unstable with these conditions. During the first four hundred kilometers, I couldn’t find a proper gas station. I found a couple but they were all closed or abandoned. I poured the entire canister and made it to Kashkanteniz. The road was getting better and at this point, I would find other gas stations open more easily.

By nine o’clock I was in Balkhash, after driving all the western coast of the lake under the same name. I shared coffee with a truck driver who was also a biker and asked some questions about my trip. I could not avoid thinking something was going to happen when I realized we had a red moon up in the sky. I arrived in Karaganda around one o’clock in the morning and thought about finding a place to sleep. I did not get a Kazakh sim card and my only option was driving to a hotel following my GPS library. I saw a small fast food shop opened and stopped to get something for dinner. There was a strange ambiance around it and there was a guy that instantly started to walk towards me. I started moving and he followed me for a couple of meters. As I was not sure what to do, I turned around and try to stop again but the same situation happened.

I decided then to leave the city and stopped at a gas station to refuel and dinner. There were a bunch of friends from the cashier and we all spend about two hours chatting. I left around three o’clock thinking I had rested and warmed up but, unfortunately for me, not too far from the gas station my reflexes tricked me and I ended hitting a median. Fortunately, nothing bad happened rather than the camera support broken and some of the travel bag stripes unsewed. A car stopped behind me and helped me take the motorcycle out of there. The ground was loose as it rained a couple of hours before.

I left the city and found myself in the middle of a one-lane road for two sense traffic. That was something I was not afraid of until I almost got hit by numerous truck drivers who were driving in the middle of the road. I was near the motorcycle out of the road and the hard shoulders here are made of dirt. It was getting colder and colder and every truck was almost a death sentence. After an hour I decided to stop, pitch the tent and rest for a couple of hours to freshen up for the rest of the kilometers to come.