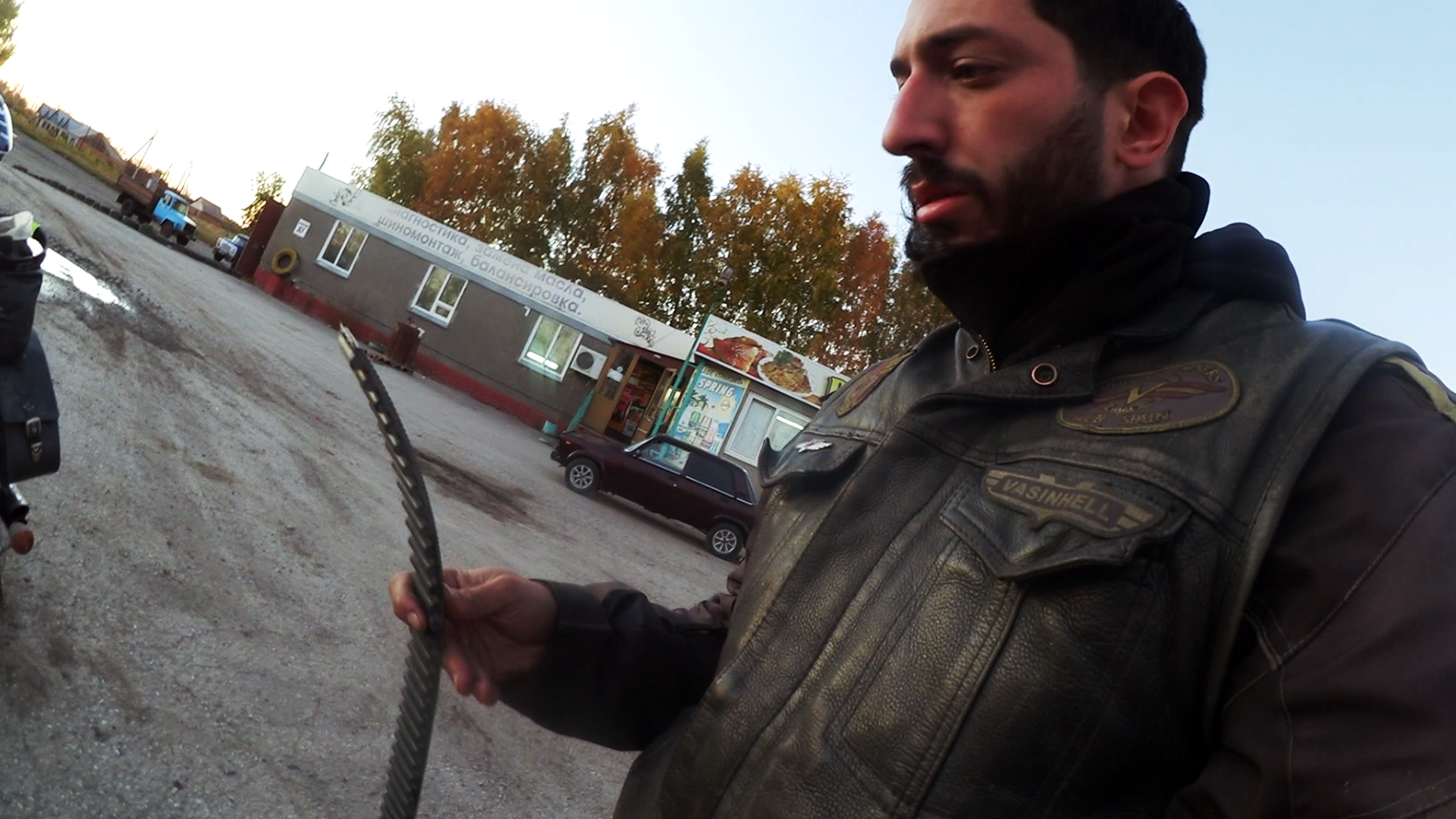 We reached the border office with some small inconveniences. We were riding through Pamir, Tajikistan, and Kyrgyzstan off-road, and bouncing on the road was something usual there. Now, for the last hundred fifty kilometers, the motorcycle was bouncing too much on flat asphalt. It’s being a week since I saw some oil on the frame going up to the saddlebags. I didn’t pay any attention to it as I thought it could come from the oil pan. I hit it a few times on the road and that was my main guess. I didn’t even though about the fact that I left Spain with a hundred thousand kilometers old rear shock.

We made it to the border control area and had to wait outside. Not too many vehicles were allowed at the same time. It was so hot that I left the bike near the barrier and looked for coverage under a publicity sign. After an hour and a half, we are in Russia again. Exiting Kazahkstan was easy. Entering Russia took a bit longer. When I was given permission to continue, I couldn’t help seeing the oil leak under the motorcycle. In less than twenty minutes the oil patch had a radius of twenty centimeters. I prayed for the officers to not realize about this and just went through.

The bouncing was continuous and I was not sure if I was going to make it to Novosibirsk that day. In addition, my sim card was not working as my credit run out during my time in the stans. I reached Karasuk and fueled up. They had a small machine inside the store which Russians use to put credit on their phones, among other things. Again, I found myself paying twice to get the phone working. I managed to contact Konstantine and Ludmila to tell them about my situation before continuing any farther.

I was arriving in Krasnozerskoye when a Police officer asks me to stop before a roundabout. This would be the first time, of many, I would be stopped in Russia. He asked me to show him my documents and so I did. He found himself with a bunch of papers written in Spanish and asking questions I couldn’t give answers to. After ten minutes he told me to continue. I do not understand Russian, but I’m pretty sure he was very upset about having stopped a no-Russian speaker. People say Police officers are sometimes corrupt and ask you money before releasing you. I got lucky, or so I thought.

I left the office behind and entered the roundabout. Just in the middle of it, the motorcycle stopped working. The throttle was completely inanimated. I only could think about the worst scenario: clutch. I stopped a couple of meters ahead near a small service area with two mechanic workshops. I tried to make the motorcycle run again but it was not possible. When I jumped off the bike, I saw the problem. The drive belt was cut in half. At that moment I couldn’t relate the origin of the problem. I called Ludmila and told her it was not possible for me to meet them that day. I had a replacement belt with a stone on it, just for emergencies. The problem was I did not have the tools necessary to make the repair, and the mechanics there couldn’t help me much. Ludmila hung up the phone and called me back a few minutes later to say: “help is on the way”.

Help did come. The first one was Andrey, who slightly speaks English. After him, Sergey came with a large toolbox, along with other three friends. They didn’t know exactly which tool was needed the first time they arrived, and Sergey had to go back to the village for some more. The mechanic shop helped us with a small car lifter and after three or four hours the problem was mainly solved. At least, the drive belt was changed. During the process, we saw that the rear shock was completely destroyed after a hundred fifty thousand kilometers. I guess that is a considerable millage. Isn’t it? It was almost eleven o’clock in the evening and Sergey offered his house so I could spend the night. Once there, Sergey’s wife, Elena, prepared us something for dinner before we all went to bed.

The morning after, I was continuing to Reshety. I would meet there at Ludmila and Konstantine. It was about seventy kilometers I would go slowly to avoid breaking the reserve drive belt I got just put. Before I left, Marina, Sergey’s daughter asked me to record a small video os both of us to share it in school.

I arrived in Reshety on time. I was going to spend a couple of days with Ludmila and Konstantine in the local aerodrome. Even if the motorcycle needed to be fixed, those days were a blessing regarding resting time. I spent a lot of hours on the road the last days and I needed to stop for a while. The motorcycle could wait for a couple of days. During this time, I flew for the first time in a glider and on a small airplane. Konstantine contacted some friends in Novosibirsk to help me fix the problem as soon as possible. He found a place where I could leave the motorcycle until I get the repairs. Unfortunately for me, the repairs would take some time to get to Russia and the price was high.

After two rest days, I continued to Novosibirsk. Vladimir would meet me there at his mechanic shop where I could gather the motorcycle. He happens to have a VN2000 classic as well. He heard about my problem and offered me to buy his rear shock which was replaced a couple of weeks ago. I spent a couple of days in Novosibirsk trying to decide whether I accepted his offer or not. During that time, I saw on the news that the road ahead was already under a snowstorm. As I didn’t want to speed run half of Russia, I decided I should better stop my journey for now.