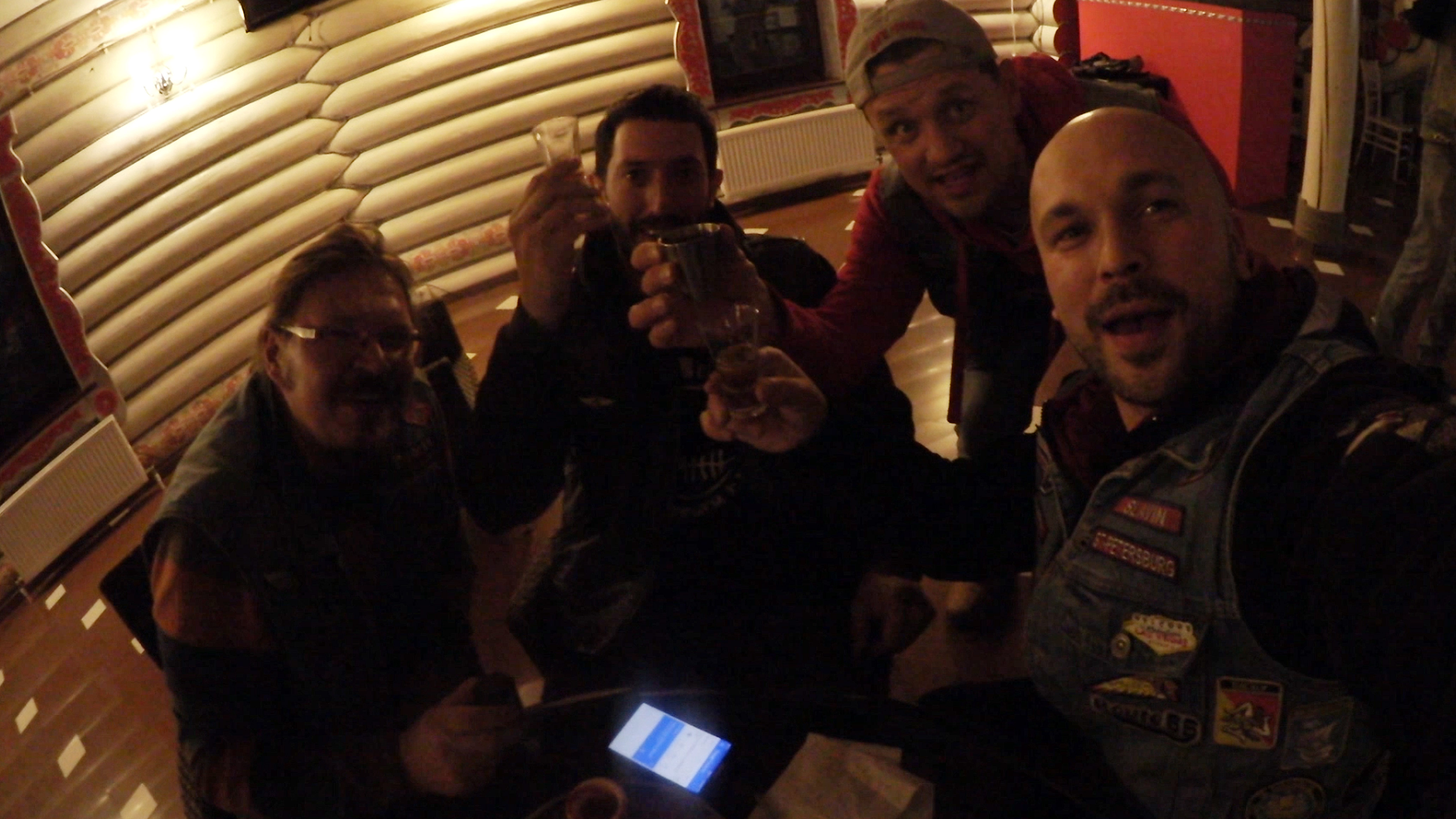 It is very early and I had to wake up. I got a flight back home a couple of days ago and it’s time to take a rest from the trip. Not a pleasant one, as it is due to the motorcycle breakdown. I told my friends of Vulcans MCC I was flying back to Spain, and immediately received a reply asking me to stay until the end of the week in Moscow. They were celebrating their nineteenth anniversary that weekend. I was forced to go through Moscow anyway so, why not?

I arrived in Moscow around eight o’clock in the morning. Aleksey would drive from Yaroslavl, attend some business affairs in town, and would pick me at the airport after that. I was wandering around the airport for a couple of hours while waiting. I couldn’t help noticing there are no benches in the airport main hall. They are all outside. I needed to sit down for a while. Luggage is heavy and my knees suffered a lot during the last weeks on the road. Unfortunately for me, the weather outside is not so welcoming. It was freezing and the rain came after a while.

When Aleksey arrived, we headed directly to the resort. Once there, we couldn’t find anyone. Not even the receptionist was there. Walking around the building I realized it was a horse riding center. They have an indoor circuit in the same building where the hostel is. The complex is quite big. They have a restaurant in this building, as well as a second one outside where we had dinner the first night. Along with this restaurant, there is a proper hotel and an activity area with a scenario. Our party tent was pitched next to it.

During the first hours there I tried to have a rest. Unfortunately, it was not possible. I have a really hard time sleeping when the sun is high, especially when there are no curtains in the rooms. Light will just come through. I got out of the room and went to the resort entrance. Vulcans MCC members were gathering there and welcoming the ones who were arriving. On top of a car trunk, sausages and small spirit drink shots were waiting for brave souls to give it a try. Meanwhile, some kind of old fashioned kettle was heating water to make tea. Could this be one of the top drinking tea countries? After a while, we moved to the restaurant. I found out they have a credit card system which you have to purchase no matter what. What I didn’t understand is why they were charging you extra for the service. I mean, you are already paying for a card so they don’t need to use money, but they charge you some extra percentage for delivering the orders. In the end, you think you have enough money, but then you realize you lost far more on the way. After dinner, the party continued at the hostel entrance. I went directly to bed.

I needed to rest. The day before I took a four hours flight along with a four hours time zone difference. My body was completely messed up. I had some breakfast at the hostel cafe before we all moved to the party tent outside. We spent the whole afternoon between games. There was another party being held in the resort’s main tent: the Octoberfest. Concerts and shows were going on one after another. Even one of Vulcans MCC members played with his band called “Vaqueros”.

After “Vaqueros” performance, we all returned to the club’s tent to have the anniversary cake and watch the fireworks. With time, people started to leave the tent. It was getting dark and many of them would drive long distances the day after. I kept playing air drums with Aleksey and we both left pretty late. I was not sure what to do. Should I go to bed? My plane would depart at seven o’clock and I can’t really sleep when I know my time is quoted. Anyhow, I think I managed to sleep a little. My friend Alex looked after me and came to my room to make sure I wouldn’t miss the flight. He called a taxi for me and went back to sleep. Thanks!

The flight transfer in Milan was just crazy. I had one hour exactly to cross the whole airport to get to the other plane. By one o’clock in the afternoon, the plane was landing in Madrid. My parents went to the airport to fetch me as I didn’t tell Sandra I was coming back home. I told her I was going to Moscow just to spend the weekend as my motorcycle was getting fixed. I know I shouldn’t lie to her, but I wanted to give her a surprise with my early return.

And so it was…