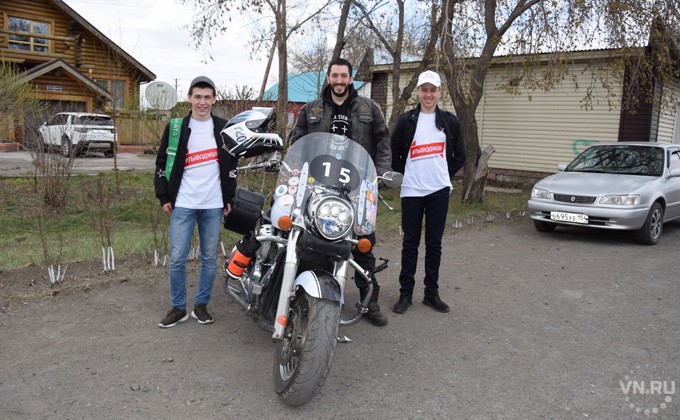 Almost a year later, Spaniard Julio returned to Novosibirsk for his motorcycle to continue his round-the-world tour. The path continued only when he drove into Karasuk and Krasnozerskoye, where bikers who came to the aid of a foreigner, when his motorcycle broke, live.

The handsome Spaniard Julio spent two days in Krasnozerka, where Sergey Menyaylov, a motorcycle lover, lives, and in whose garage they put a bike back on its feet. He also spent two days in Karasuk. The foreigner wanted to limit himself to a couple of days visiting the savior, but Alexey Bondarev, a karasuchanin, did not let him go. Together with his friends, they visited the service station and some private garages.

Julio was surprised that we repair our equipment ourselves. He explained that in Europe, bikers on motorcycles only ride, and repair and technical inspection specialists are engaged. “In our city, the guest decided to move only on his motorcycle. He refused to be a passenger in the car”, Anton Glushchenko, a biker from Karasuk, told VN.ru.

He spent the night in the family of Alexei Bondarev. He enjoyed talking with the children, ate borscht, Easter cakes and even played with the cat.

The Spanish biker does not understand Russian. We communicated with him through the “translator” in the phone. I understood some words in English, I could explain others. I used gestures. We have one hobby, so it’s interesting for me and my friends. They showed him a retrotechnique in the Karasuk youth center. He met with the guys who ride on motorcycles. At first, Julio was not interested, and explained that racing is not for him. We had to explain for a long time that the guys do not have a driver’s license yet, and only on the racetrack they can ride. But he insisted. I told him: “With them (the guys), not in the city, but on the racing ground”. “Well, if it is in the racing platform, yes”. “It probably looks funny. But then he understood, and shook hands with the children and took a photo”, said Alexey Bondarev.

Alexey showed his company, where he makes souvenirs, interior and outdoor advertising, and provides photo services.

Now Julio is on his way to the Far East, and then to Korea. From the first time Russia did not submit to the Spaniard, he hopes that the Russian bikers, among whom he already has many friends, will help him go this way. The brotherhood of motorcycle enthusiasts from the Novosibirsk region monitors the traveler: they transmit information about Julio to other cities so that the foreign guest is met and helped if something happens to his fighting horse, or simply fed and given the opportunity to rest after a long journey.

We recall that at the end of September, a Spaniard motorcycle making a world tour broke down on a highway near the Krasnozersky Novosibirsk region. A local biker came to his aid, providing overnight equipment and repairs. The bikers communicated with gestures and through the translator in the phone.