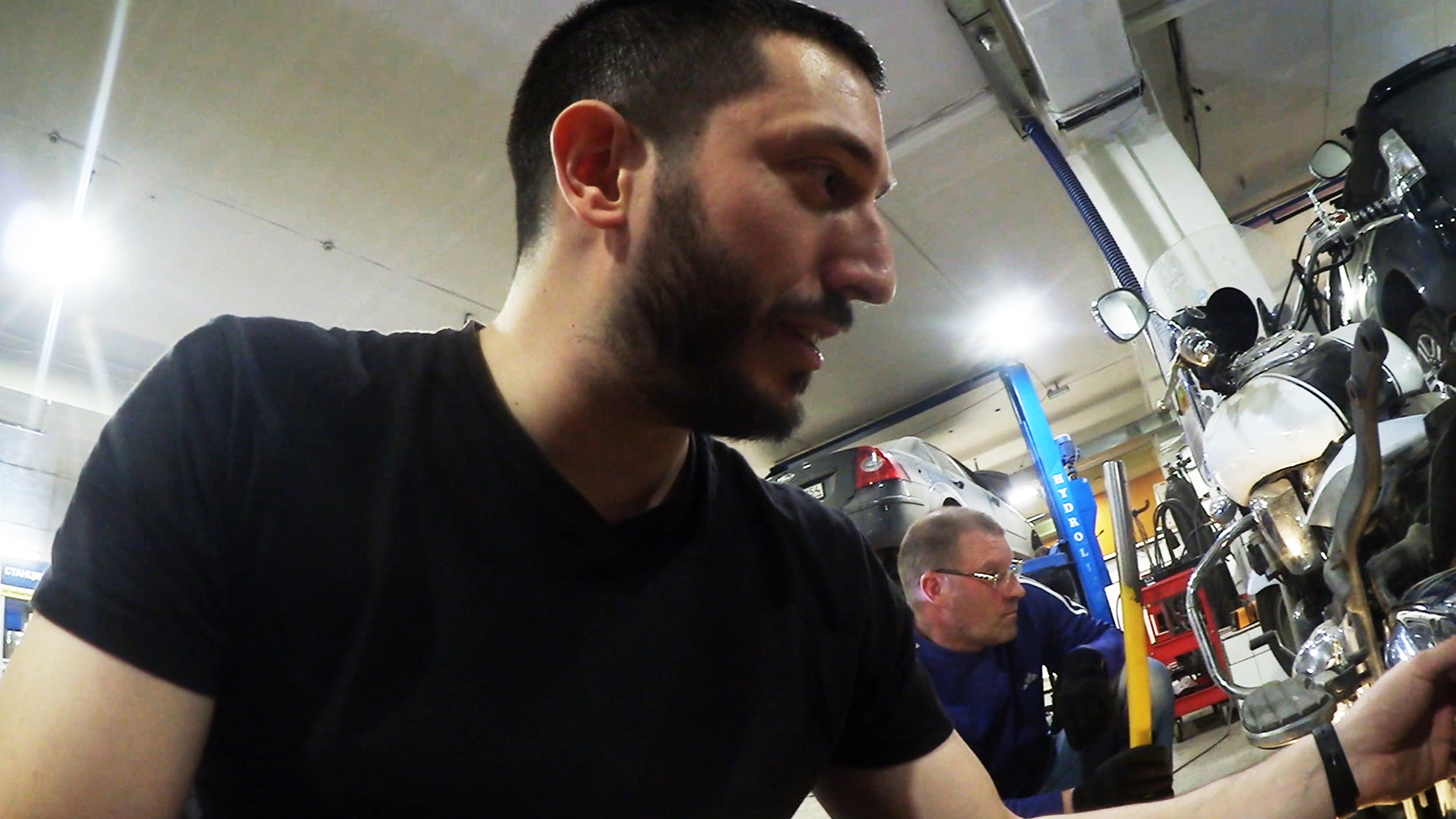 After leaving the motorcycle in Novosibirsk for almost seven months, it is time to fly back to Russia and get back on the road. During these months, Vladimir took care of my motorcycle and made the small fixed she needed. Not everything was possible to fix before my arrival, as the new drive belt, and the rear shock we got from Hagon Iberica, were in Spain with me. They would not be replaced until I fly back. This time, my parents took me to the airport as Sandra was not in Madrid because of a misunderstanding. Sandra had the hardest time last year when I left. Now it was my mother.

The flight to Novosibirsk was done in two parts. I first did Madrid – Moscow and had to wait about three hours before taking the plane which would take me to Novosibirsk. I choose this flight as it will prevent me from walking around with my luggage throughout the airport. I managed to get an additional bag with me thanks to my father-in-law who gave me an old suitcase for me to travel with all the new parts I needed for the motorcycle. Without it, I would have suffered the bureaucratic process of customs. That means I would be left behind in Russia without knowing when the package would be delivered. Again, the sim card stopped working due to inactivity. Wi-fi in this country is free most of the times, but you need to register with your telephone number. You receive a call you should cancel, and input the last four numbers as a password. After a while, I decided to use my Spanish sim for this in order to let Vladimir know everything was ok.

Vladimir fetched me at the airport and took me directly to his shop to see the motorcycle and start working on it. It was about five o’clock when the plane landed, and six o’clock when we arrived at the garage. The first thing we did was changing the drive belt and storing the spare one again. The second important thing to fix was the rear shock. While this was being fixed, one of Vladimir’s employees helped me with the GPS connection problem. It seems the battery was the cause of it and we changed it for a new one. Russian batteries are quite colorful compared to the European ones. With all set, I took the motorcycle for a short test ride along the avenue. I am not sure if I am not used anymore to this motorcycle. The helmet squeezes me, the suspension seems to be too hard, and the road is in very bad conditions. Anyhow, the motorcycle is running.

After fixing the motorcycle, the next step was customizing it to deal with the roads we are planning to ride on. Last year I had a really hard time with my saddlebags due to the roads conditions. Driving on a very unstable road made the saddlebags break apart a couple of times. Vladimir took me to Sasha’s shop, M_teh, to get a frame done for the panniers. Sasha was aware of my time schedule and in less than twenty-four hours the frame was made and installed. The saddlebags will no longer move!

While being in Novosibirsk, the Easter party was being celebrated. Therefore, I was invited to join some of the masses the Orthodox Church was given. It is my first time in such event and probably my impressions are quite different from yours. The first day, the Mass lasted about an hour and a half, in which prayers were recited for the names that people pointed at on paper. Meanwhile, there were four priests making confessions in the middle of the hall. I did not remember that in the other churches I had entered only to look at, they did not have benches. During the whole Mass, the people were standing still. On Thursday, I saw there were four located at the end of the hall. The mass that day began at eight-thirty, and until ten o’clock they were reading the prayers. From there, a two hours liturgy began. It is worth mentioning that from time to time, the priest would come out with the incense smoking all the church perimeter while people moved to the side to let him pass. After a few chants, they offered some small pieces of bread to people. The ceremony continues and later on, they offered bread again but this time it was a little bigger. Vladimir’s brother was one of the sections that day, and we sat down to have lunch with him afterward at the Church’s canteen.

With the motorcycle ready, I spent the last night in Novosibirsk before starting the second part of this adventure. Vladimir helped me getting a sim card, which I couldn’t do myself. Even if you have your passport, you need to be registered somewhere. That is, having an official paper saying where your residence is. I did not have that by then, and I’m not sure if I will ever have one of those again. To get one from a hostel you need to spend at least three nights in it. People are already waiting for me and I guess I will not be visiting many hostels this time.