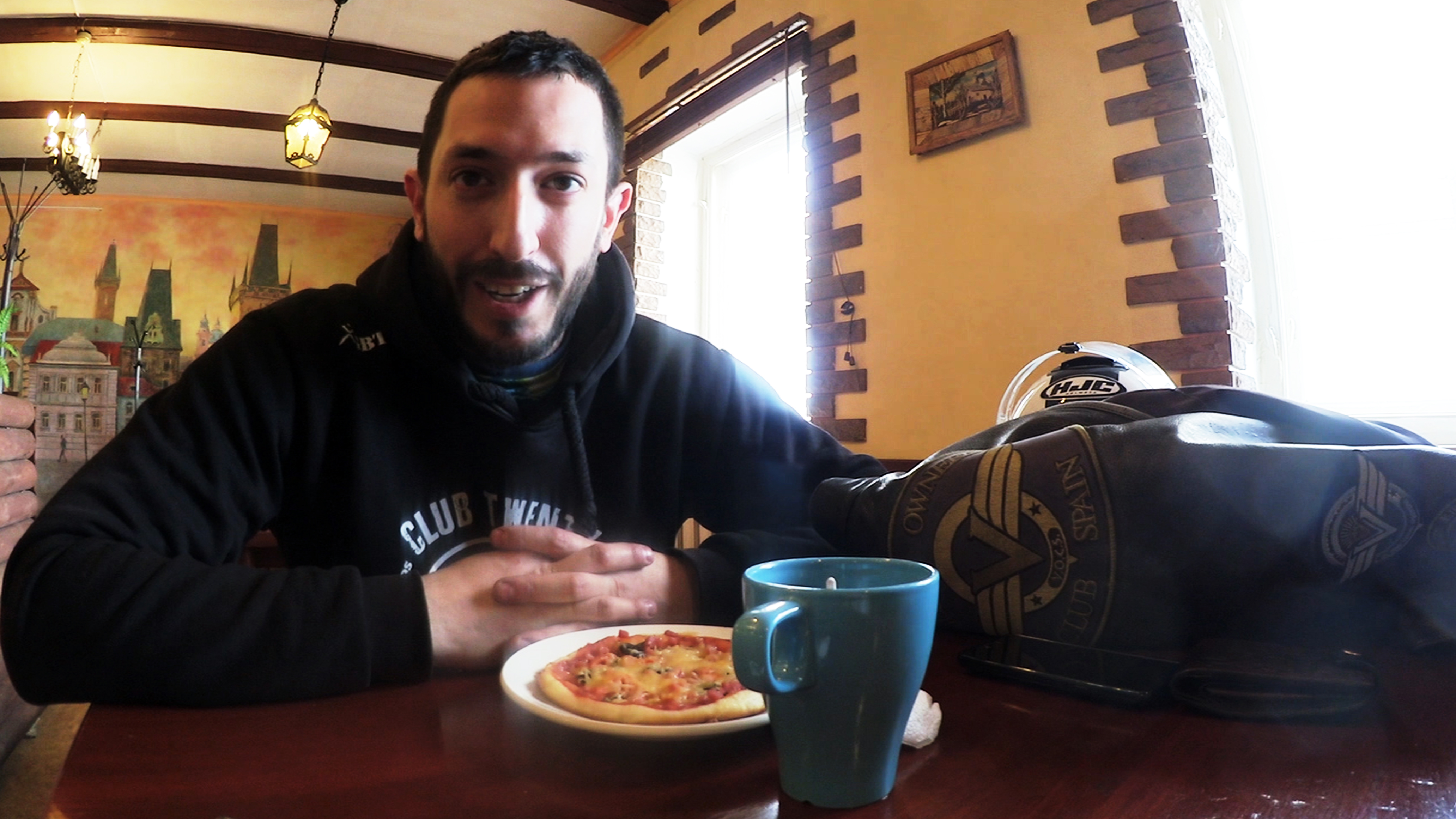 The sun is shining in Novosibirsk. The temperature is still a little low but it seems the weather will be on our side today. Vladimir took me to the workshop to have everything on the motorcycle ready while waiting for Constantine to come to say goodbye. We were finally ready to leave by midday. The only thing left was fueling up before taking our road down to Krasnozerskoye. Last year we depleted the cannister to get in Novosibirsk from Reshety.

The first kilometers felt strange. Even outside the city, I had to take some time to get used to the motorcycle again. It was definitely not the best way to do it, bearing in mind that the motorcycle is fully loaded and we have a car tire on the rear axle. However, the confidence grew back and after a while, we were together as one again. With each passing kilometer, my hands were getting colder and colder. The temperature was going down and I was driving with summer gloves. I found a small restaurant on the roadside about seventy kilometers from Novosibirsk. I stopped to warm up a little and have something for lunch.

I found my first language problems in Russia since I came back. We spent these days with Vladimir and we rarely used the phone translator to communicate. Just a few situations needed this tool due to lack of vocabulary. The girl who welcomed me in the restaurant didn’t know how to react. I simply asked for a “latte” but something was wrong. She wanted to answer me back but I couldn’t understand. I took my phone and repeated the question. She was even more shocked now. After a while, I had to use the expression  “please, talk to the phone”. Her message was: “we don’t have milk”. What on earth was wrong here? A restaurant with a huge “coffee” sign on the door and without milk? Ok, no problem. Let’s have a pizza as well. The girl started to speak some words I couldn’t understand, again. Her message now was: “the pizza is very small”. It was lunchtime and usually, people get a two-course meal. By default, the first course is soup. I replied back saying it wasn’t a problem. I was on the motorcycle and I didn’t need to eat that much. The cost of it all was just seventy-six Rubles, about one Euro.

I left the restaurant and after ten kilometers the Police stopped me. I have been stopped by the Police only once before in Russia. That was when the motorcycle finally broke down. As usual, they asked for my documentation. Passport, driving license, motorcycle info, etc. At some point, the officer started asking for a paper I couldn’t understand what it was related with. I kept showing him papers but it didn’t seem to satisfy him. I pulled out my phone to try to get his desire translated but it was so low on battery that it suddenly shut down. After five more minutes of not understanding a single word, a second officer said: “camera, go!”. I politely thanked him and continued.

Around four o’clock we were back at the gas station in Reshety, where we spent our last days in this area after fixing the drive belt on the motorcycle last year. While filling up the tank, I decided to charge my phone. I tried to pull out my cable box from the saddlebags when I realized it was not there. Have I put it on the luggage bag? I took everything out of the motorcycle before realizing I left all my cable connections in Novosibirsk. The cashier at the gas station nicely took my phone and connected it to the power source while I was putting everything back in its place. I tried to contact Vladimir and saw he was aware of that already. As posting the cable was not an option, Vladimir would give them to Victor and Elena, who I would meet later on in Omsk. With a six battery pack for the Handycam, I think I can manage until I get there in four days. Once everything was back on the motorcycle, I recovered my phone and sent a message to Sergey to let him know I was just one hour away from Krasnozerskoye.

Halfway down the road, two bikers appeared and waved at me. I stopped on the hard shoulder thinking they were just curious about me. I made a mistake. I didn’t recognize one of the motorcycles until I hopped off mines. Sergey left home with his friend Roman to escort me during the last kilometers. Sergey had recently painted his motorcycle and he had sent me some pictures of it the day before. I just didn’t realize it was him at first.