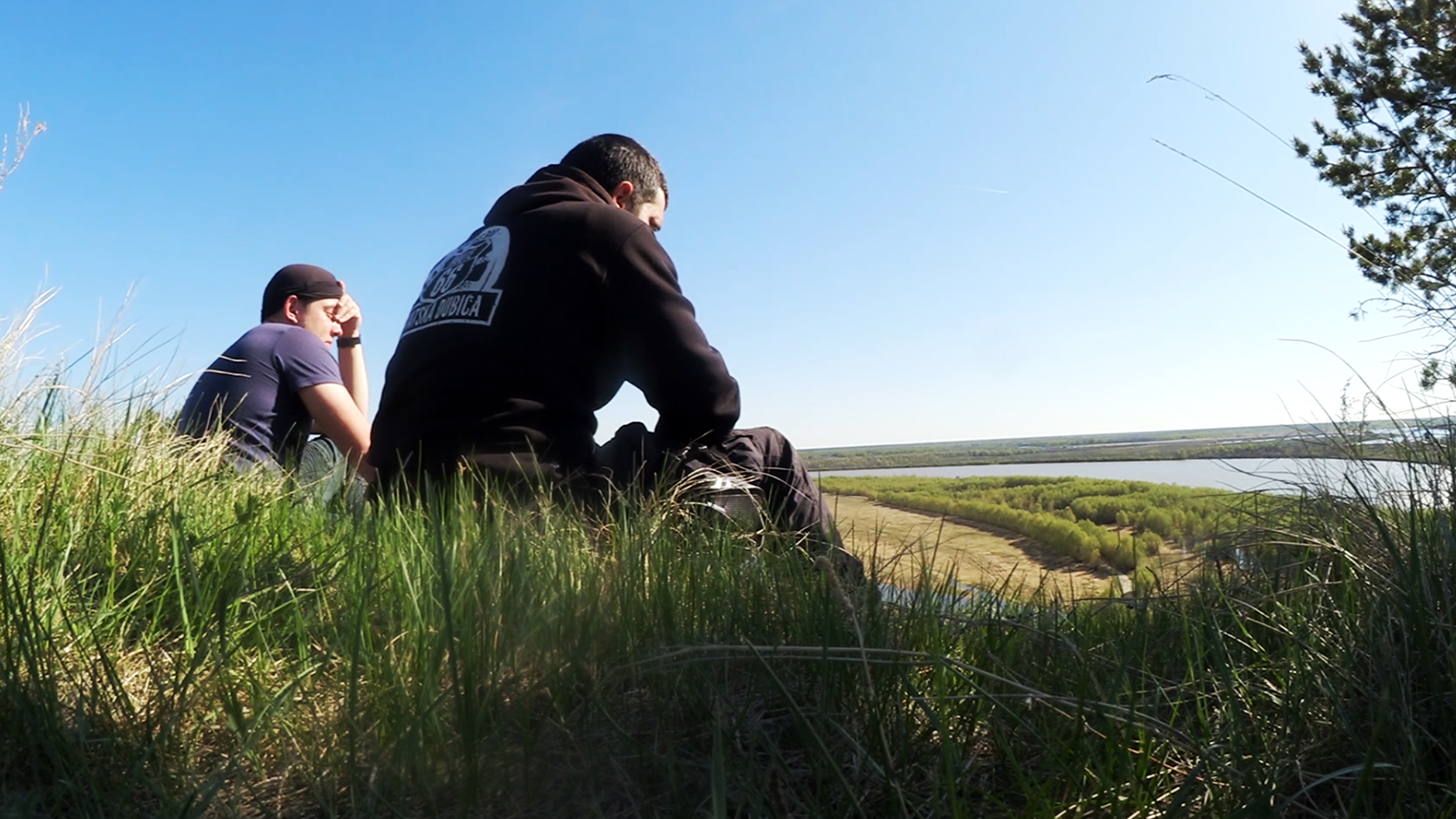 It’s nine o’clock and I’m leaving Artiëm’s apartment. He is going to work and I will continue my journey to Tyumen. Before leaving the city, I went to the other side of the city to see if I could find an adventure canister. Last year I’ve been struggling on the road carrying the standard canister you can buy in any gas station. It is a ten liters container with a shape that it is not easy to handle. As it is like a box, there is not much area to fix it on top of my luggage bag and it easily falls back. Last year that ended up braking my plate number support. This adventure canister has the same capacity but looks like a wooden board instead. I went to the store even if it was Saturday. I wanted to give it a shot but unfortunately, it was closed. No need to lose more time, Andrey is waiting for me in Tyumen.

The ride was smooth. Although it was not raining, the heat was intense. Tyumen’s traffic was not helping either. To get to the address I was given, I had to go around the city and the highway was under construction. As I was getting closer, trees surrounded the road and traffic was decreasing. I arrived at a long term camping entrance. Something similar to those places where people have a small house to spend the holidays. The road was not in proper conditions and the GPS gave me the wrong indications in it. As it couldn’t find the right location, it made me drive the longest and more difficult road to my destination. So was my frustration that Andrey’s wife came for me.

Andrey’s family was waiting for me with dinner on the table. After dining, Andrey prepared the sauna but we didn’t have the chance to use it. One of the neighbors came and we spent the rest of the evening talking. The next morning we moved to the city and went for a ride around it. The first thing we do was visiting his grandson who recently had a bicycle accident. How strong could that be in order to need a liver operation? After that, Andrey took me to walk across Vlyublennykh bridge, also known as the “Lovers” bridge, over the Tura River. The next stop was Tsvetnoy Bul’var park before having a snack at his daughter workplace. Once the tour was finished, we spent the evening playing with his granddaughter at home.

The morning after, Andrey took his granddaughter to school and later escorted me to my next destination: Tobolsk. It took us a while to stop for lunch as all the cafeterias on the road were closed. By four o’clock we were in Tobolsk. Andrey called a friend of his expecting he was in town. He wasn’t. Another biker came to the rescue: Evgeniy, a member of Road Sharks. Once we were all together, Andrey went back home. Evgeniy and I went for a walk around the Kremlin’s walls before moving to Rock&Rolla bar, a place was some of the local bikers reunite. A couple of other Road Sharks members arrived and we all moved to their temporary clubhouse nearby.

While being in the bar, I tried to learn about the requirements needed to achieve the polar circle. That is the direction I am following but I was told I may probably not reach it. At the moment, the information we gathered so far is that I will need authorization. That area is a gas extraction point and the access is restricted. According to the internet, this process would take minimum of two months. Not an encouraging fact at all.

On Tuesday, Evgeniy and I went back to the Kremlin. Unfortunately, the museum area is still closed but we can’t figure out why. The day before they told me to come today. Today, they speak about tomorrow. We then moved to the old prison which is close to it. On our way there, we entered the Kremlin’s church with the strange situation of the nuns asking us if we were Muslims because of Evgeniy wearing a wool cap. As I don’t speak Russiam, I am not sure if they were concerned about our presence or just curious. We entered the prison and visited every single corner in it. One of the rooms was conditioned as a ten-person bedroom with a table in the middle. On top of the table, a checkers board was set. Evgeniy and I played a couple of rounds. I did not remember all the rules of this game and fail easily.

On Friday, we rode to Abalak. As there was not much to see in the local Kremlin, Evgeniy thought it would be more interesting to visit the wooden Kremlin there. This place holds some festivals in summer and has its own hostel area. The inside is decorated with a lot of fantasy objects and sculptures based on Russian literature. After walking all around it, Evgeniy took me to the top of the hill where we relaxed for a while feeling the breeze and watching nature. On our way back, Evgeniy wanted me to try the hot springs they have in Tobolsk. In the past few days, every time someone spoke about hot springs they showed me a picture of what I would relate to a spa center. In this case, it is a private area where there are five pools connected, each one with a different temperature. Just the best way to face the cold weather we would find in the following days.