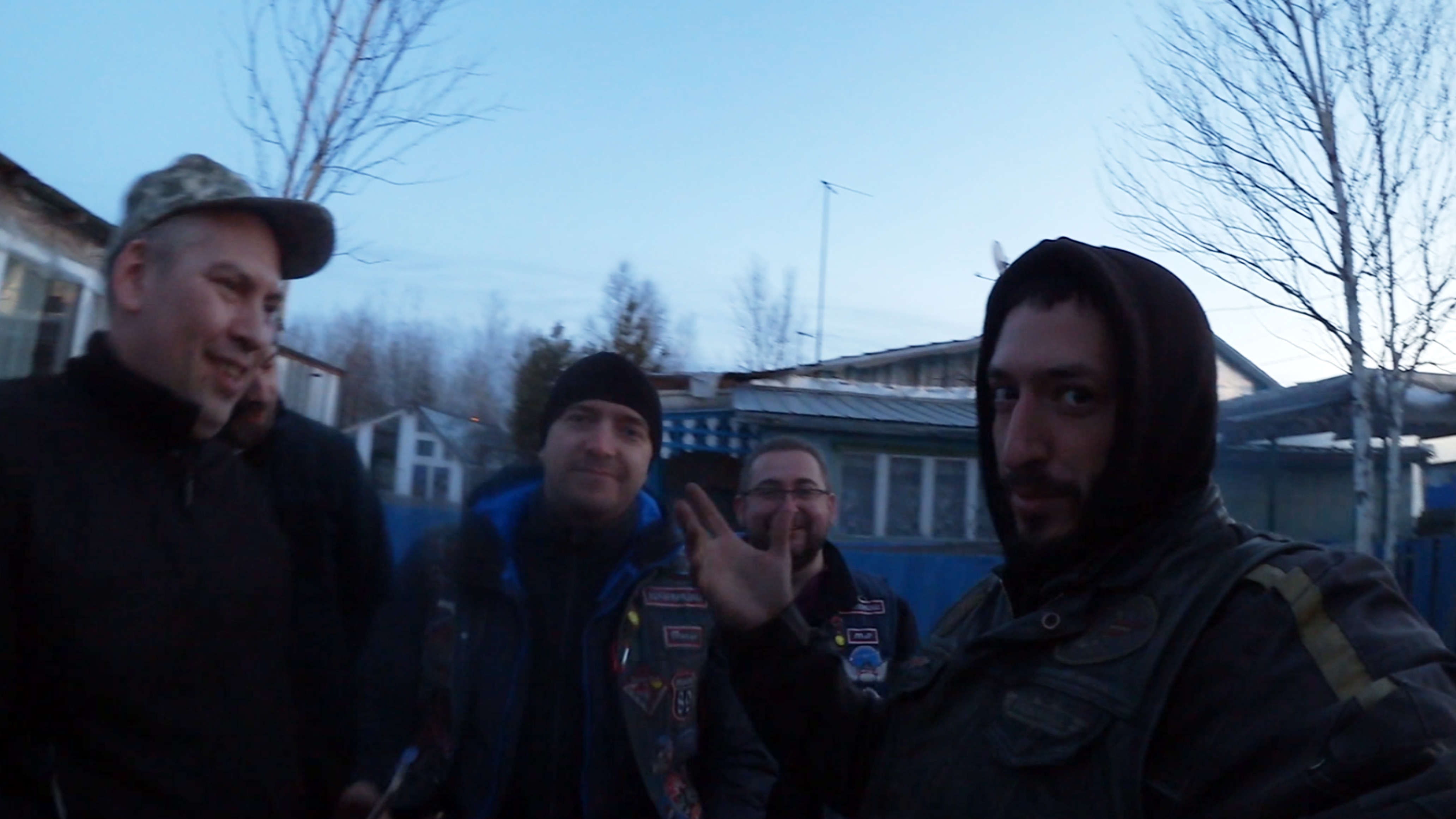 I left Nefteyugansk quite late. It was about one o’clock when I sit on the motorcycle after putting on the rain clothes. The rain was not too heavy but who knows what could I find farther on the road. There are three hundred kilometers between us and today’s destination. The storm accompanied us the first seventy kilometers until we left Surgut. After that, we kept the rain layers on as the temperature was dropping fast. We were riding nice and easy but that didn’t help, the police stopped us anyways hundred seventy kilometers from Neftyugansk. As always, we were stopped just because we are on a motorcycle and it was not possible to ask their questions or give them more documentation that the one I clearly understood: “passport, passport!”. Being stopped this time was a mess. Having all the rain gear on is always a problem. Luckily, I had my Oasisand leg bag with all my documents in there.

It is strange to see that after all the kilometers we have driven, the only place was the police has stopped me is in Russia. Last year we were stopped two days before ending the first part of the trip, right before the drive belt cut in half. This year we were stopped three times already. It’s unbelievable. Every time I see a police car parked on the road I start thinking they are going to hold me down. I must say I did run in more police controls than the one I have been stopped. All my papers are up to date and I didn’t find any police officer whiling to get me into trouble. I like to think that many of them just want to look at the motorcycle. Even so, it’s frustrating.

Once we left Surgut behind, the landmark turned out to be even on both sides of the road. The tundra was present, and some times it mixed up with random desert areas. Most of the small lake and rivers were frozen but it was not until I did another two hundred kilometers that we found snow on the sides of the road. The biggest river I found was at the entrance of Tarko-Salé and it was completely frozen. You can check that on the video. The last kilometers towards Tarko-Salé were on concrete plates. I was told that asphalt can’t stand the winter in this area and this is how they keep the road in “one-piece”. Unfortunately, those plates can be loose and I hit some of them. At some point, the motorcycle started to make a strong whistle. The next gas station was twenty-five kilometers away. Once I got there, I tried to check the motorcycle for any signs of damage. Maybe the front shock, maybe the bottom frame, maybe… I don’t know. I couldn’t find anything and after leaving the gas station the whistle disappeared.

We arrived in town around nin o’clock and Vladimir, a contact Dimitri gave me in Nefteyugansk, was waiting for me with Aleksander. They took me to a garage so the motorcycle could sleep in a warm place and then we headed to Aleksander’s house. Other members of Кочевники motorcycle club were there as well. As always, we had the typical Russian food and drink, shashlik and vodka. As we were getting closer to the polar circle, the party didn’t last until nightfall. In fact, we left around twelve o’clock and the sun didn’t set. It would never have happened in this season anyway.

I woke up at Max’s house the next morning and had breakfast with his family while waiting for Vladimir to come. I needed to change my rear tire because the one I bought last year was a soft winter one. We have been driving under thirty degrees or more these days and that was just too much for it. The first thing we made was looking for a spare one. It was Saturday and that would be the most difficult part. The biggest shop in town had what we needed and they even told us where to have it put in the rim. Of course, removing the wheel from the bike was something we had to do on our own.

As the tire removal was something we have done quite a few times in this trip now, I took some extra tools from Vladimir and started working on it. I removed the saddlebags and… Surprise! Now we know where the whistle was coming from. A stone was probably already near the drive belt but didn’t damage it until we hit some of the concrete plates. The stone found a strategic position to groove it all around down to the tooth area. Fortunately, it wasn’t cut in half but it was very close. I had another drive belt for emergency cases but I decided not to change it as I preferred to still have a spare one than risking not having one anymore.

Once the tire was back in place, Vladimir and Max took me to an ethnographic park in the outskirts fo the city. It is a recreational park as well and people can hire some of the yurts there to spend the day. The decoration set along the walking path in the park represents one of the trades of the natives: wood carving.