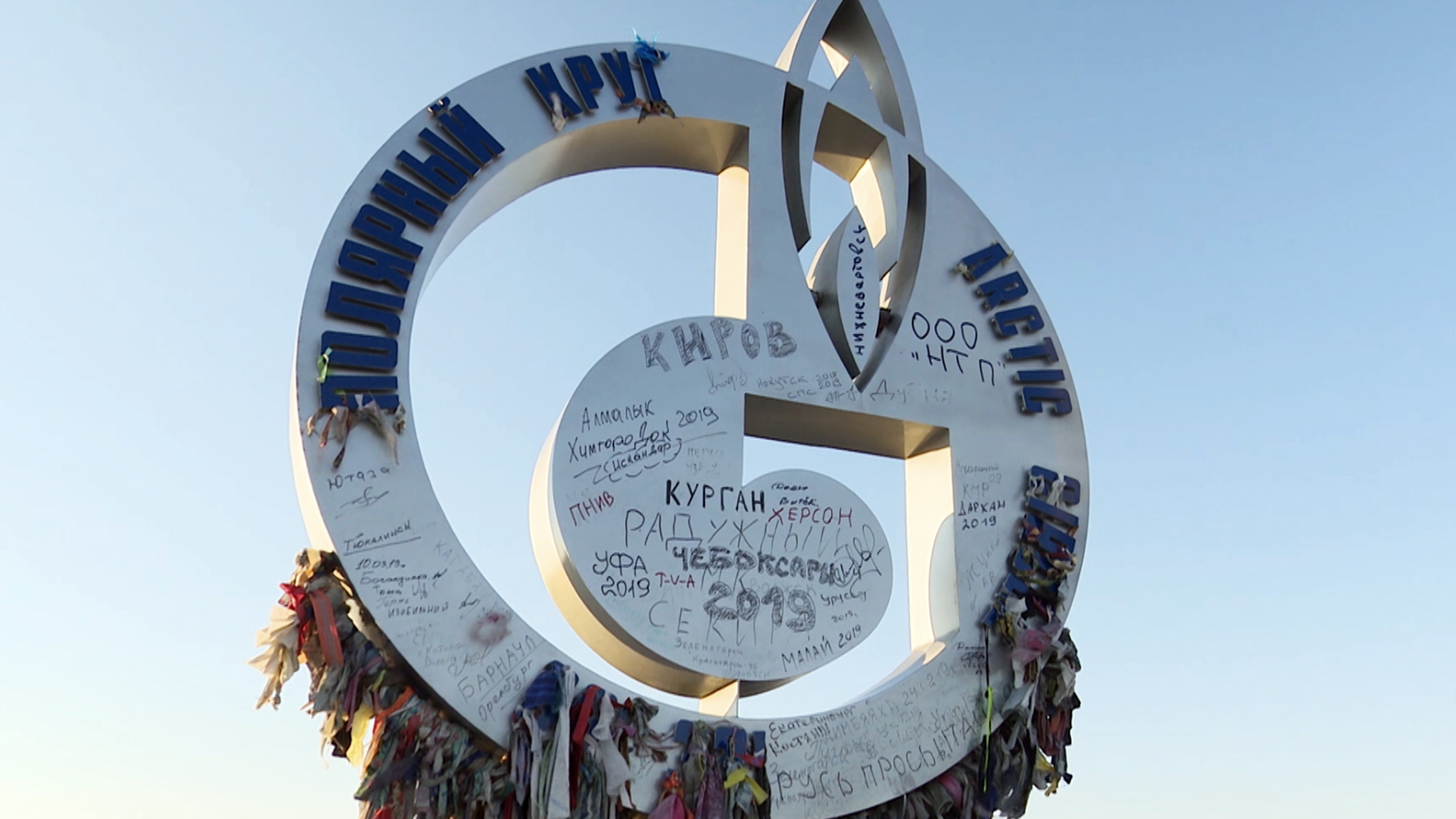 It’s getting a bit late but I am not aware of it. We just came from visiting the ethnographic park in Tarko-Salé and I am farewelling Vladimir and Max. The road to my next destination is not so long, just a hundred-fifty kilometers away. The day before, Vladimir told me there were some problems on accessing Urengoy saying the road was flooded. That morning, other bikers confirmed the crossing was safe enough to do it on a motorcycle and that they would be waiting for me before it. I was not expecting the local television news to be there as well.

I took my time to get to Korotchayevo because I didn’t know NurBike club was actually waiting for me there. As soon as I started, I had to take a break at the rest area. Toilets were not in good condition there and the surroundings were completely full of garbage. There were some truck drivers parked in the area and I decided to talk to them for a while. One of them knew some words in English and told me the route he was doing: Moscow – Vladivostok – Urengoy – Moscow. He said that route takes him about two months to accomplish. In this area, most of the road is built with concrete plates and gets very slippery. I continued my way and stopped a few times along the road to record some small clips.

When I got to the gas station, several bikers were standing there with a television cameraman. After a small presentation, I was told the river level was getting higher and no more time should be spent there. I thought we would go to the Polar Circle the next day but I was wrong. The Polar Circle is a hundred kilometers north-east from Urengoy and they were escorting me there today. After fueling up, I was ready to go. The first obstacle was the river crossing twelve kilometers ahead.

The road was covered in water. In fact, the crossing is made over a floating bridge which obviously doesn’t cover the complete river width. That is the main reason why there is an area where the water goes up to your knees. We stopped for a couple of minutes before crossing it so Alexey, the president of NurBike club, could check if it was still safe to cross. After a couple of cars made it to the other side, the outline to follow was clear. We started the engines again, set all the motorcycles on a line, and crossed all at once. The ground was steady until we reached the bridge ramp which was covered with small stones. Nevertheless, we were on the other side now.

Not too far from the bridge crossing, near the city entrance, we stopped for fifteen minutes in front of a restaurant. I am not sure what we were waiting there but the cameraman could record some clips while we were there. While waiting, I checked my Falco boots. It rained a bit a couple of days before but I wasn’t able to make a proper test on them. This time, the boots were three quarters inside the river and my feet were still completely dry. I must say I was very happy at the time because I had had really bad experiences with some other waterproof boots which turned out to be not.

The hundred kilometers separating Urengoy and the Stella, the Polar Circle monument, are very wavy. We were driving fast and I think we could have more than one accident. Sometimes the motorcycle just flew off the road depressions. We stopped when we were halfway there because part of the group was missing. The car where the cameraman was in was not too fast and one of the motorcycles stopped working. Could that be due to the river crossing? They tried to make the engine run again but after a while, they left the motorcycle on the side of the road to pick it up on the way back.

We finally reached the Stella all together. While I was taking some pictures, food and drinks were being taken out of the car. Liubov, the woman rider of the group, gave me some presents on behalf of the biker club. The first one was a matrioska I should use as a shot glass. The second one was a sweater with some typical symbols of Yamal, the Siberian peninsula principally bordered by the Kara Sea. Yamal, in the language of its indigenous inhabitants, means “End of the Land”. As well as the vodka, to heat up the body, they gave me stroganina, a popular dish with Siberian natives consisting of raw, thin, long-sliced frozen fish.

The temperature was dropping and it was about time we left. We stopped a few times to warm up and to pick up the broken motorcycle on the way to Urengoy. Once we arrived in town, everyone pulled out. The cameraman was standing on the other side of the road with his camera on a tripod. Two women were standing there as well. It was now time for an interview! (Click here to read about it)

After the interview, we spent the rest of the night at NurBike clubhouse. The group was getting bigger and bigger and everyone was celebrating. Music was on and I was even invited to join them during a small performance.