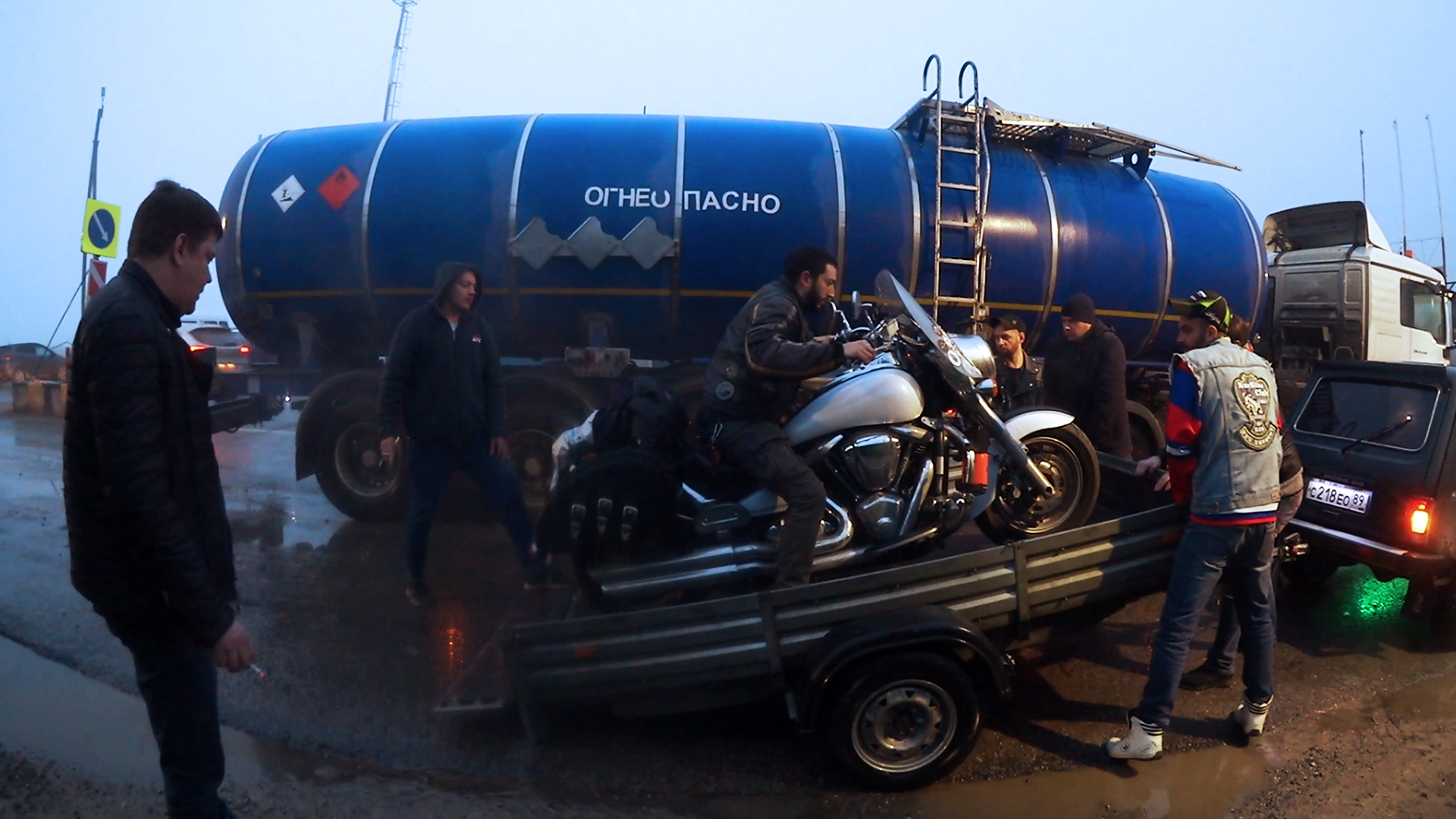 It’s two-thirty in the morning and we are now leaving NurBike clubhouse. I was willing to stay longer but I planned to work a little bit on my videos the next morning. It didn’t seem that the party was ending anytime soon and the weather conditions didn’t help either. Just for you to know, I am less than a hundred kilometers south from the polar circle. The sun doesn’t set here in summer. We obviously didn’t have daily but what locals call “white night”.

I spent the night at Artur’s house which is a couple of blocks away from the clubhouse. The snow was covering the sides of the road shaped as mountain ranges and water was grouped in small lakes. If I just had some Minifigures, I could probably have a nice scenario for some epic battles. The temperature was dropping but I was still able to walk just with one extra layer. Artur was home alone with his dog that day.

I started working as soon as I could get up the next day. I had breakfast with Artur and after a while, I realized I needed a better computer to work with the videos my new three-sixty camera was recording. Artur has an audio recording studio and offered me to use the computer his associate, Anton, has there. After some minor fixes with my laptop, we moved to the studio. Anton came along to help me set the software on his computer. Liuba came later to join the guys. While I was working, Artur showed them my YouTube channel and started playing all the videos. The night before, right after arriving at his house, he did the same.

By five o’clock I had finished processing all the videos and the guys ordered some food. Oh yes, it’s about dinner time here. Liuba, Artur, and I went back home to eat so the studio could be closed. When finishing, Artur told me to take it easy in Urengoy. My first answer was: “I can’t, I have to continue if I want to reach Mongolia on time”. His reply changed my facial expression. “It’s very likely that you can’t leave in seven days”. So, I asked for some more information. Summer is coming and all the ice I have seen over the rivers these past days is melting. The river we crossed yesterday was growing higher with every passing minute. As I had no intention of being stuck for a week there, I thought the better thing to do was leaving that day. Novy Urengoy was not too far and I could make it there with no problems. Artur told me to calm down. NurBike club would come up with a solution once we meet up with them again and explain what was happening.

Aleksey, the president of the club, has some friends working at the river crossing and he has updated information about the situation. The same as yesterday. After a couple of hours, our fate was decided. There was a trailer available outside and the motorcycle would cross the river on it. The current was strong enough to make us have a hard time and the water level was increasing. I moved the motorcycle out of the clubhouse and put it on the trailer carefully. The floor was covered with thin ice and I didn’t want to let her fall. After a couple of minutes, the motorcycle was set and we were ready to go. Before we left, Evgeniy, another member of NurBike club, gave me the keys of his Ural. It was the first time I would drive this kind of motorcycle. Probably this would also be the last one.

Driving the Ural was quite a challenge. The first thing I tried was the reverse gear to turn around. Then, I realized that this motorcycle didn’t have brakes. How on Earth these people drive these motorcycles like this? I had heard that other models I came across in this trip didn’t have them as well but I never sat on them. I am not used to braking with the engine as a normal braking maneuver. That would certainly be a problem on the road.

The car with the trailer was the first in line. I was the second one carrying Evgeniy and his wife with me, and another car was closing the group. It was now getting quite cold and the fog made its appearance. As Artur mentioned during the day, the scenario looked post-apocalyptic. I had som trouble driving around due to the non-brake issue and my hands freezing but I managed to get to the river crossing. I was not driving the Ural farther than that. I hopped off the motorcycle and jumped on the trailer and sat on mine while the rest were discussing how to cross the river.

I did all the crossing sat on the motorcycle. I wanted to record the whole thing. Luckily, the biggest fear we had was when stepping out of the bridge to the river. The clearance was huge and the trailer cracked heavily. In the end, we made it safely to the other side.

Evgeniy tried to do the same driving the Ural himself. He was not that lucky and had to push back the motorcycle after attempting the crossing.