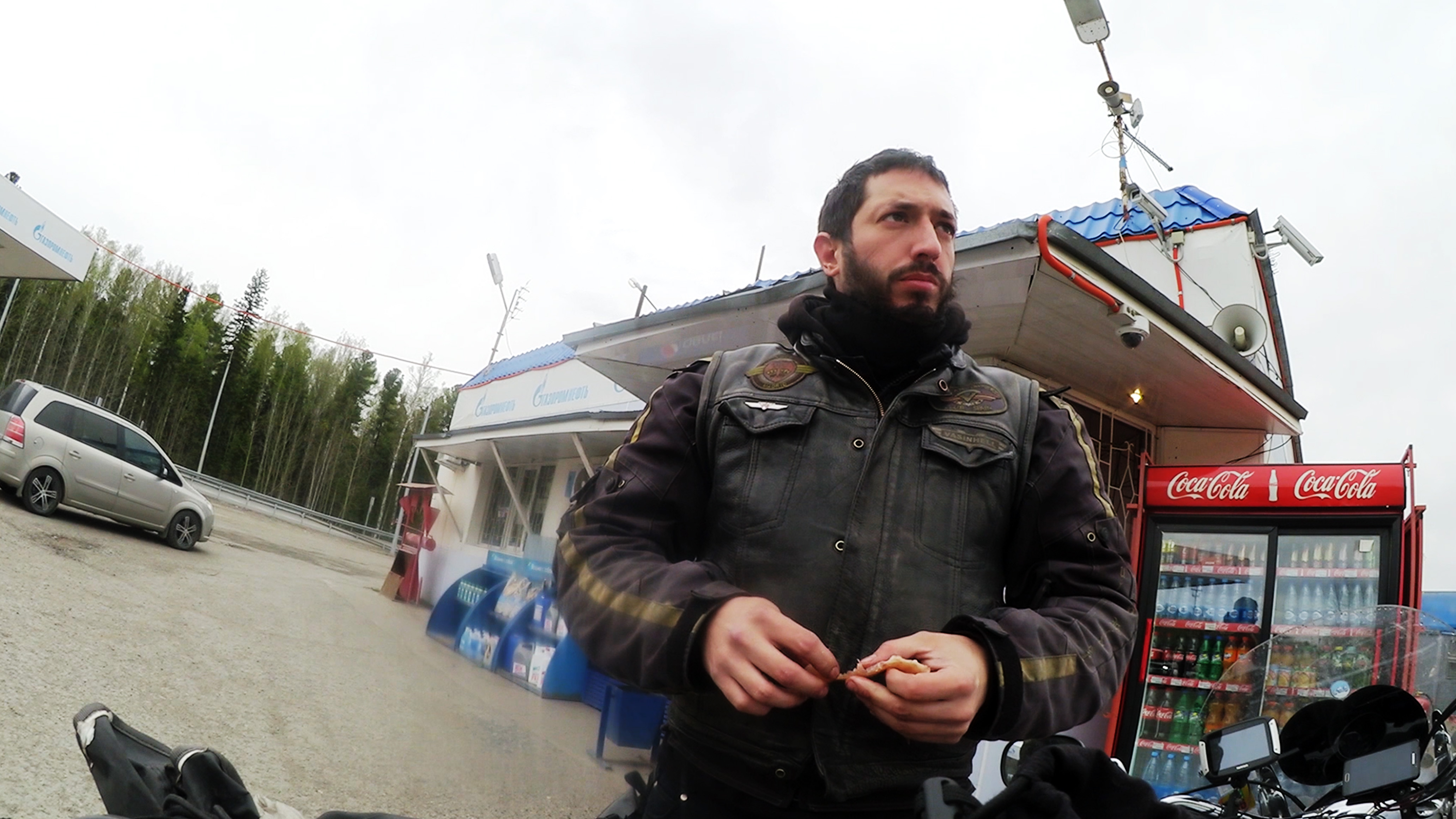 I stayed two days in Nadym before I turned around and went back on my steps to Novosibirsk. I would have to drive on the same road down to Tobolsk before I could choose a different path to continue on. Before doing so, I was planning to continue West from Nadym to Salehkjard but the road is only opened in winter. Actually, there is nothing but a swamp in between.

You could tell summer was coming. The river on the edge on the city was starting to meltdown. Ice was nothing but a floating raft now moving current wise. Roman tried to take me to the bridge before the plate breaking began but it was already too late. We visited the city’s museum instead, hoping to find something interesting. Unfortunately, the museum was very small and there was not much to see in it- Roman had never been in it and he felt quite disappointed. I stayed with Roman as he was on holidays for that month. Max was preparing himself for his holidays and would take a plane that night. Before leaving, he came back home for dinner and brought me some presents.

My journey south started on Thursday. My first stop was in Novy Urengoy, again. Roman sent me a message the day before telling me the local news wanted to interview me before I left. I met Mikhail at the city entrance again. This time, on the west side. We had lunch together and before heading to the clubhouse where the interview would be held, he took me to see his workplace. I had the chance to see both his office and his on-site cabins. Due to gas extraction, north from this point, the access is restricted. I have been told I could not continue further but Mikhail managed to get me through. In fact, I was not cheating or going undercover. For some reason, the permit required is only applicable to the car and the passengers. What did we do then? We just swapped positions in the car to get across the control point. Silly, right?

Back in Novy Urengoy, we went to the clubhouse to prepare for the interview.  to my surprise, two different groups came. One was lead by Tamara, for Impulse TV, and the other one by Kristina, a local blogger. Both interviews were divided into two scenarios. The first one was regarding me, and the other one was outside talking about the motorcycle. Unfortunately, I had more time to chat with Kristina as Tamara was pregnant and couldn’t stay longer. There was no bathhouse this time so Mikhail invited some friends home to share the evening. After dinner, Mikhail had to take care of some stuff at work and left me home alone so I could rest properly.

I left Novy Urengoy around nine o’clock in the morning. My plan was to drive all the way south to Nefteyugansk. That was about eight hundred kilometers that would take me all day to do. Roman told me the day before he has some friends in Gubkinskyi that would be waiting for me. At this point, I was not expecting to stop for anyone on the road. I wanted to continue to catch up on my schedules. Guess what. I was intercepted by a car twenty kilometers before Gubkinskyi. The driver pulled out his hand and made me stop on the hard shoulder. With his very small knowledge of English, he managed to say: “Me, biker Gubkinskyi. Come eat. Benzine station”. As I said, that was not on my plans but I decided to follow him. It’s one of the ways to meet people on the road and he came to look for me.

He drove me to the same gas station I filled in on my way north a couple of days before. Two more club members were there waiting. They paid for my tank refill and invited me for lunch. While on the table, a third member came, Stepan. He offered his garage for me to rest and stay the night with them. The weather was changing. The rain was just about making its appearance. As it was still a bit early, Stepan left me alone at the garage so I could rest and recover from the road. Even if the snow was melting, it was cold and windy. Later that afternoon, Stepan and the rest of the club came to visit me. Stepan brought some gifts with him such as local jam, meat, and even some extracted petrol souvenirs.

In the end, I stayed for two days in Gubkinsky. I spent the second one with one of the club members, Denis, who took me to the tundra for a hunting session. I am not a fan of hunting, but I joined him to experience it. I did not shoot any animals, just some bottles in the air. Most of the time was spent waiting for something to happen. There were not many birds around that day.

Continuing on the road, Stepan drove with me until a couple of kilometers outside of the city. We had a coffee together while waiting for Denis. Unfortunately, he couldn’t make it and I went back on the road. I expected to get a little further today. The odds were not on my favor as the snow was gone from the sides of the road but the temperature was still dropping. The overall temperature was around zero degrees, reaching minus two in some areas. I had to drive slower as this was an extreme condition for the gear I was wearing. I finally made it to Nefteyugansk and called Dimitri right away. It was Sunday and I hoped to find some of the guys around the Road Sharks clubhouse. Again, they treated me great. Aleksey came with her daughter and took some time to help me fix my saddlebags. Yeah, I forgot to mention that on the way south I found out some of the rivets went out and I was about to lose one of the covers. I spent the night at the clubhouse again with the company of Dimitri, his girlfriend, Andrey, and Valeria.

On Monday I continued thinking to get to Osh this time. The distance this time was a thousand two hundred kilometers straight. The weather in this area changed already. The temperature was going up and skies were cloud clear. Before I got to Tobolsk, I was stopped by the police near Uvat’s gas station. It’s the fourth time now. At this moment, I’m just playing the fool card: “no Russian, no English”. As always, a few minutes later I’m released. Evgeniy was not in Tobolsk until three days later so I continued to Ishim, taking the south-east road from the city. Finally, a road I haven’t done for the last two weeks. Compared to the rest, this part of the road turned to be nice and curvy.

I’m not sure but I think it was Dimitri who gave me the phone number of another biker in Ishim. I didn’t stop there on my way to Chelyabinsk and I wasn’t planning to do so this time either. For some strange reason, Andrey called me when I was ten kilometers before the city. I still had some time to do the three hundred kilometers left to Omsk but I felt like meeting new people and stayed for the night. Andrey took me to a hostel near the city entrance and left me alone so I could relax for an hour before the rest of the club come meet me. They took me out for dinner and brought some other gifts as well. This time it was mainly alcohol. Homemade whiskey and vodka, and a bottle of Balsam. I keep the Balsalm at home, the rest is gone.

On my last stretch to Omsk, I found Luc, a Frenchman going half-way across Russia on a bicycle. He has been around the world a couple of times now and he is repeating again to fulfill other roads he hasn’t been to. We chatted for a while and then we continued separately. I arrived at Omsk just a couple of days after Lili’s birthday. I missed the party but It was nice to see them again. Following Omsk, I stayed two days in Chany to meet Lena and Vitia. They showed me their local business, a milking company, and we had the chance to have a good rest.