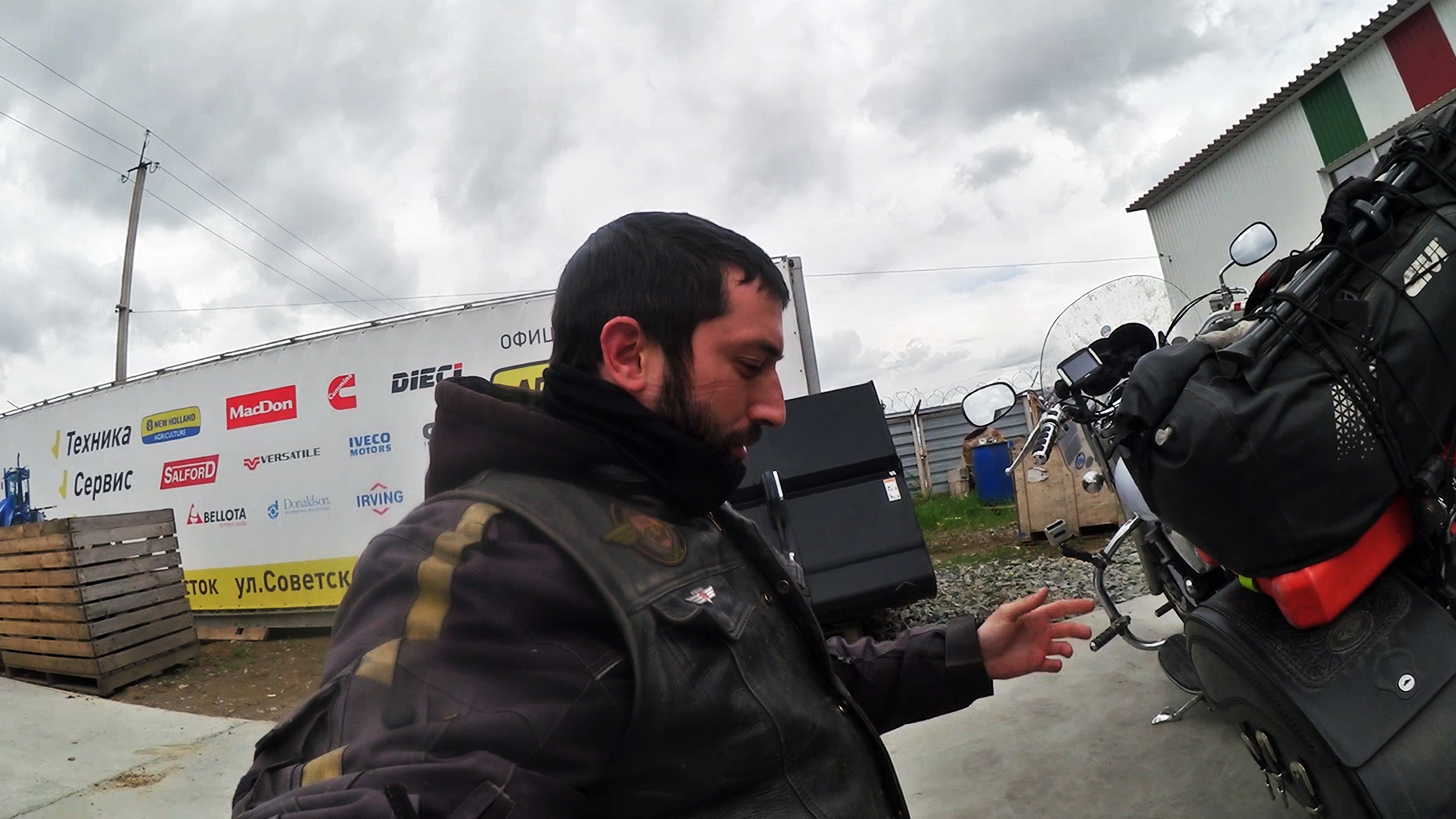 On Friday morning I said goodbye to Elena and Victor. They would drive to Omsk later on to meet Lili and Maxim. I had to continue on my way to Novosibirsk. The first stop I made when I arrive in the city was in Sasha’s workshop. I have been talking to him the previous days and this was the last day I had to see him as he was going on vacation. I needed Sasha to make me an update on the saddlebag support that he handcrafted a month ago. In the rush, I didn’t realize that the webbing I was using was too small to fit in the pin. What I needed were some rings somewhere to be able to hold the luggage firmly.

I arrived at the workshop after midday. I took the things out of the bike and Sasha helped me clean it a bit. In the last twenty days, she had accumulated a lot of dust. Elena and Victor had given me a spray to clean the helmet’s visor and I intended to use the same product to clean certain areas of the motorcycle. As you can imagine, this product was not comparable to what was available in the workshop. With the pressure gun, Sasha scanned chemical foam and then rinsed it with water. The bike was obviously gleaming.

Sasha studied the modification to be made and since he did not have time to go shopping, he asked Vladimir to go to a hardware store to buy the necessary rings. While we waited for Vladimir, I took the time to disassemble the saddlebags. Half an hour later Vladimir appears and Sasha gets to work. Since there is no work I can help with, I simply wait and watch him work. Like the other time, the result is satisfied my needs and those of the motorcycle.

As not everything was going to be rolling smooth, when leaving the workshop I saw that the drive belt has an embedded stone. Due to the number of road works that we cross on the way back it is very difficult to know at what point the stone has been cast into the system. There is no doubt that this adds a problem to the groove that the drive belt has previously suffered. I moved to Vladimir’s workshop to take a look and decide together what options were available. Last year Vladimir still had the Vulcan 2000 and he had told me that he was using a Harley Davidson drive belt. Obviously not being the drive belt of the same brand the motorcycle is was not the best option. However, the difference between the two is that Harley Davidson’s has one tooth less and the price is much lower.

As it was a little late we couldn’t do anything else in the workshop. I went to Vladimir’s house and we looked for the specifications of both options. Here in Russia, they use a platform that is similar to Facebook but is called VKontakt. As I had a local phone number, I was able to enter this community and publish through Vladimir the necessary information so that the biker community could lend me a hand to find a replacement quickly. In less than 24 hours I had already been contacted by several people and around a thousand people saw my request. It was not until noon the next day that I received a message from Leonid. Leonid is another Vulcan rider who also owns a Vulcan 2000. Despite being four thousand kilometers away, he found a person who could provide us with a Harley Davidson’s drive belt.

The next morning, we drove along with Vladimir to the train station because finally the Honda Goldwing he had bought in Japan. arrived. With the help of another friend and his sons, we dismantle the box in which it came. We took the motorcycle to the workshop and Vladimir began to check it out today. Meanwhile, a group of bikers and I headed to Sokur to meet Ivan and pick up the drive belt. Once there, Ivan not only had one of them, but he offered us an additional one free of charge. Both from Harley Davidson. One of them had one tooth less and the other, with the same amount of teeth as Kawasaki’s original, was narrower.

The next day we returned to the workshop to check the damage onthe drive belt and we removed the stone that was embedded in it. We discovered that the damage was not so serious and we decided not to change it for one of those acquired the day before. Thinking about the future, it was better to have them as a spare in case it broke and not changing it and having such a bad luck that they suffered the same fate later. That would leave me out of options. That same afternoon we went to celebrate with Vladimir’s family at a colour party that was nearby.

Before finally saying goodbye to Novosibirsk, I visited the International Funeral Culture Museum located north of the city. A very interesting museum that Elena had recommended during my stay in Chany. One of the most curious things they had was the use of virtual reality googles in which you could live a funeral and a cremation from the eyes of the deceased. An experience that at least was only visual.