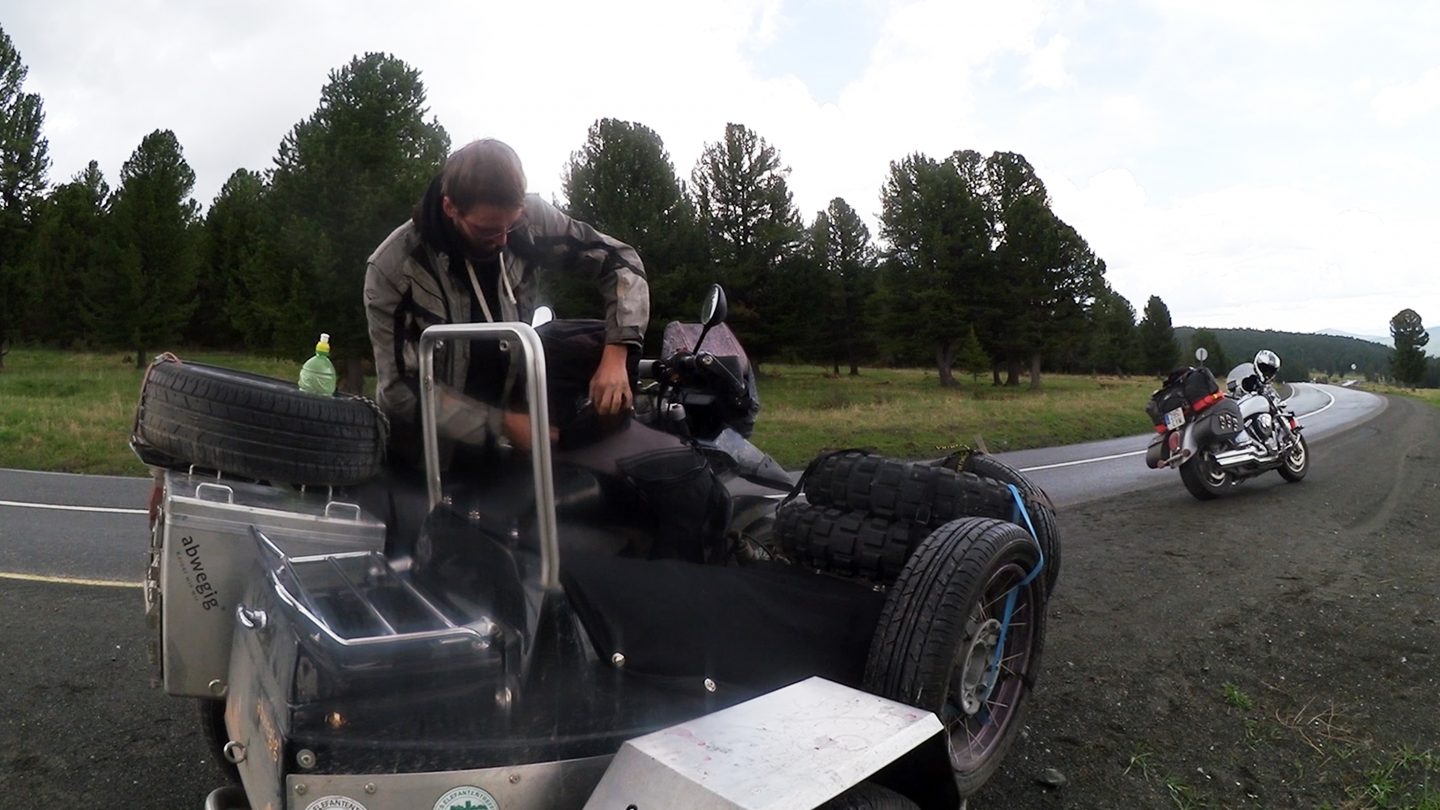 I left Gorno-Altaisk early in the morning. I wanted to ride all the way to the Mongolian border because it was Thursday and I didn’t want to find the border crossing closed. Someone told me a couple of days before the gates were closed on Sunday.

Not too far out of the city, Altai’s welcoming sign appeared on the right side of the road. As I was kind of distracted, I had to turn around a couple of kilometers later. The road in this area has lifeguards on both sides, preventing everyone from changing driving sense. The sculpture is just a sign, but it indicates the entrance to The Altai Republic, situated in the very center of Asia at the junction of the Siberian taiga, the steppes of Kazakhstan, and the semi-deserts of Mongolia. Forests cover about 25% of the republic’s territory.

Not far from there, right after the highway turned into a single-lane road, I felt something hitting my helmet. When I tried to close the helmet’s visor I realized the blocking pin got loose. I carefully stepped on the hard shoulder and went back by feet and found the pin on the floor. Unfortunately, someone had passed over it in the meantime and destroy it completely.

A little bit farther, I found the Seminskiy pass and someone who I would travel with for the next three weeks. Max, originally from Germany, drove all the way from Colone’s outskirts up to this point with his father’s 1150R BMW with sidecar. I found him resting on the hard shoulder. I was trying to reach the border crossing that day so I could enter Mongolia on Friday. Max, on the other hand, wanted to take his time and arrive at the checkpoint by Sunday evening. I took some time to think about my trip and the different opportunities it offered me on the way.

Last year, I met Evgeniya and I followed her down to Tajikistan for three weeks. Making that decision took me out of my schedule but made me discover two new countries I was not expecting to go to. Even if the way back on track was quite accelerated, I made it back to Russia before the winter season. So I asked Max if I could join him for a couple of kilometers, just to share the road with someone new. He accepted, and off we went.

We didn’t do many more kilometers that day. The weather looked unpredictable and the road was nice and curvy. I learned from Max that his motorcycle had some problems with the starter after crossing Uzbekistan. He has been pushing the motorcycle to kick start it for several weeks. Due to the road conditions, the starter got loose and he didn’t want to force it if it wasn’t necessary. The solution he came up with was parking the motorcycle always faced down the slope. Although this would make our stops easier, sometimes it was not possible and rolling up the sleeves and pushing was required.

I think we drove for four hours before searching for a place to stay. Max was into camping and I haven’t slept in the tent this year yet. We stopped at a highpass and on the way down we started our spot hunt. Not too far from the end of the hill, I spotted an area near a river. After a few more kilometers, we manage to get off the road and drive to this point. The dirt road was hilly and quite cracked. It was my first taste of real off-road after several weeks and I had to be careful.

The place had a sign on the fence. We could read on the phone translator the sign was indicating that it was a camping area. We set the tents near the river. My motorcycle stayed in the base camp while Max’s was up in a hill in order to safely start it the next morning. We found a fireplace made of stones and plenty of wood. Most of it was wet, but that wasn’t supposed to be a problem after a while.

Being far out of the road didn’t get us as much coverage as we thought. It didn’t take long before two different cars left the road and came towards us. One with just a couple, and the other one with a whole family. Max did most of the chatting due to his knowledge of the local language while I was nodding on the background.

It was almost dinner time when we were all set. Rainy clouds upon us, fierce river flow on our side, and mountain fog were sketching a cold night. I thought about using one of the deer meat cans Michael gave me in Novy Urengoy. I was keeping those for these situations. No supermarkets, heatable easy-to-go food. I started preparing my food when I realized Max brought a whole kitchen with him.

While I was just heating a can, Max was cutting onions and some other vegetables to prepare cuscus. Max was driving with a sidecar full of tools, food, and even spare parts.

That was going to be quite an adventure together.