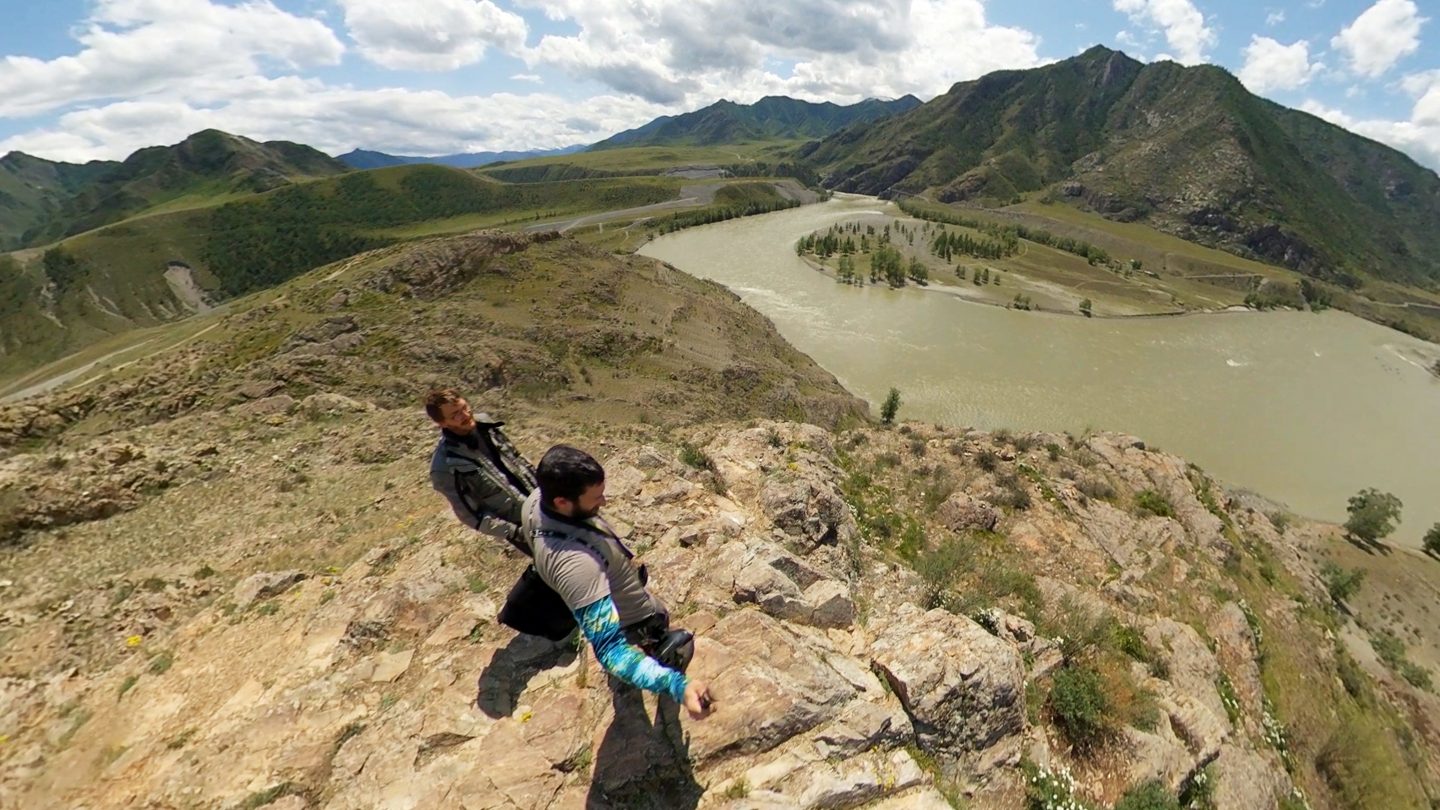 The night we passed at the campsite was quite cold. The river kept strongly whispering during our stay. The rain didn’t help me to fall asleep either. As expected, the remaining wood was soaked up when we woke up. Anyways, we tried to light it up to warm us while having breakfast. There was a thick fog covering the surrounding mountains.

As we had the gourmet dinner the night before, I wanted to try for the first time cooking Kasha in the wild. Until now, I only had the chance to do it in hostels. I was using my camping gas “stove” while Max was burning benzine in his not so old Russian stove. I happened to have the same tool with me for the past two weeks but, again, I didn’t have time to test it. In fact, Evgeniy gave it to me empty in Nefteyugansk. My lack of experience with it and my constant procrastination on buying a small bottle to carry the extra benzine for it just kept me out of its use. Watching Max using it was interesting.

As we weren’t in a hurry, we left the campsite around eleven o’clock. There were less than to hundred fifty kilometers to the border and we had three days to get there. Comparing to walking, the way up out of the camping area was easier than the way down.

We found nice and curvy roads ahead. Most of the time, alongside the river. We took our time to enjoy what nature was offering us. We stopped at several rest areas where the scenery was just incredible. Colorful. We even found a military monument made with gut-emptied original vehicles.

Max wanted had to places in mind where he wanted to stop by. The first one was a turquoise Geiser lake. The location of this place was not so accurately marked on the map. After a couple of kilometers, we slowed down so we could stay alert. Indeed, there was not even a sign. We passed by and Max had the feeling that we missed the spot. We turned around and parked the motorcycles in front of some kind of rural farm-alike hostel near the road.

Quite some cars parked as well and people paying at the entrance before walking into the woods. Was this the place? Max couldn’t intuit it just by reading the signs. It was not clear. We just paid and hoped for the best while following the others. The path to the Geiser was made of wood with traditional fairy tails characters statues on both sides.

It was tricky to go around the Geiser as the whole perimeter was covered in mud. Something considered as usual due to the rainy weather in this area. We took some pictures of the lake bottom and tried to capture the Geiser movement. Unfortunately, the cycle was so slow it was sometimes hardly difficult to even record on video. However, stopping by was a nice experience. Something I would have never seen on my rush to the Mongolian border.

Not too far from that point, we decided to stop. I spotted one of the many rivers that ran alongside the roar with a large flat area around. It was also quite separated from the road and with easy access. We found a lot of wood to fire up our campsite and a lot of horses as well. I expected to have a swim in the river but it wasn’t too deep and the water was freezing cold. That night, Max wanted to capture the stars. We were in a valley and the sky was clear. He prepared the camera so he wouldn’t need to do it in the early morning and then he took some pictures of me light-writing in the dark.

The next morning, I talked to Max and proposed him to stay a second night there. We were less than two hundred kilometers from the border and we could use some rest in between. The border control wouldn’t open until Sunday and that left us with two days. It was pointless to ride for about a hundred kilometers and pitch the tent again and repeat the process the next day. Max had to do some checks on the motorcycle and therefore we stud the ground.

We had some visitors during the day and one of the cars had a family inside. They parked about three hundred meters further and continued on foot. After a couple of hours, nobody came back. Max and I started exploring while searching more wood for the night and discovered there was some kind of stone shore behind the corner of the river. We haven’t seen the family back after several hours. Our guess is they went to visit something, or somebody, on the other side of the river. Who knows.

Around six o’clock in the afternoon, a van came to camp not too far from us. Their group was formed by six people. One of them came twice to talk to us during the night. He first presented himself and then brought some potatoes and vodka with him. He offered us some vodka and gave us all the potatoes. We had a bonfire and he insisted on throwing them directly in it while chatting.

Although Max speaks Russian quite well, I found myself understanding quite a lot of what our new friend was asking. Even I could make myself understand somehow. Needless to say, the main questions we are asked through Russia are very simple: Where are you from? Where do you go? Where is your wife?