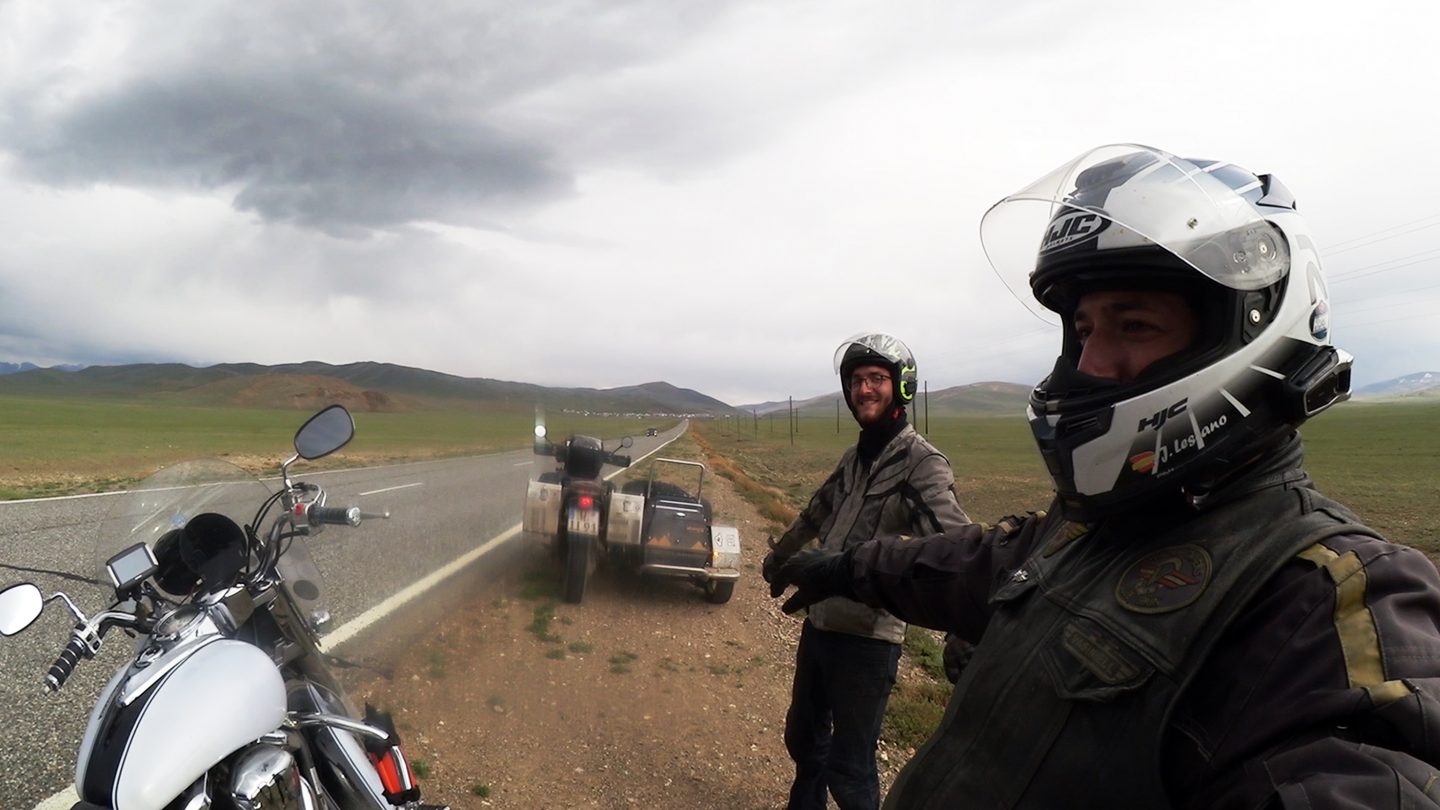 After spending two nights in our private paradise, we finally moved on. It was Sunday and we would be reaching the Mongolian border in the afternoon. Just a few hundred kilometers separated me from my biggest adventure until now.

We left the campground behind and took the curvy asphalt to the southeast. Not too far from there, Max spotted a couple of camels walking on the steppe. As it was a small group, we thought we could get even closer without scaring them out.

There was no road. The directions we needed to follow were not clear either. Max was driving ahead seeking the camels. He has fewer problems than me while driving on sand and we met up a bunch of times back at my position because he had found a dead end.

We reached a higher point where we decided to stop. That would be the best spot so Max could kick start his motorcycle. From that point, we had to follow the camels on foot. We chase them for another five hundred meters approximately and Max could get close enough to take some detailed pictures of them.

Back on the road, we arrived in Chagan-Uzun. “Mars” was on sight. A friend of Max told him there was a place not too far from the road with red-colored hills similar to the ones of the red planet. To get to the so-called “Martian area” we had to get across the village. Just a couple of meters away from the main road the asphalt disappeared. All the village was covered with small stones granting much less grip to my tires than desired.

Stones led to dirt, and dirt turned into dust. The total distance between the village and the tourist area is about eight kilometers. Again, we were the only motorcycles around.

We arrived at a parking area and Max went up the hill to face his starter problems afterward. As soon as he passed by ignoring the guard’s indications, two men approached me. First of all, to charge us for the use of the parking lot. Secondly, they made me notice Max wasn’t paying attention to their indications and therefore he needed to bring back the motorcycle to the parking’s ground level. I roughly tried to make them understand the motorcycle’s issues while Max was coming down. With some more Russian words from Max, they didn’t complain anymore.

With all the requirements fulfilled, I stepped down the motorcycle and joined Max for the promenade. Some handmade steps were at the bottom of the hill but the rest of the way up was a slippery slope to heaven. No handrails, no steps, no safety lines. Besides being in a deserted area, the views from the top of the hill were just amazing. Looking straight back to Chagan-Uzun, just a dried-out valley. In the opposite direction, a canyon with no visible end at sight.

Our next stop was Kosh-Agach, the last big city before the border. Both Max and I were told to stop here to buy whatever we needed before continuing any farther. People frequently continue to Tashanta, the city where the border control is, finding themselves in a place with rather very small grocery shops instead of supermarkets.

Before shopping, we stopped at a petrol station which had a car workshop next to it. Max needed to replace an old tire from the extra rim he was carrying. Better doing this here than on the other side of the border. For less than six Euros, a new tire was mounted and we were ready to continue.

One of the things I wanted to get was an ax. After our camping experience, I thought it could be a useful tool in case we kept finding big pieces of wood to fire up. I almost got my hands on one but I didn’t have much cash left and the shop wouldn’t let me pay with my credit card. In the end, I am grateful I didn’t buy it. As soon as we set foot in Mongolia that tool would have turn useless.

With all the gear ready, we continued to the supermarket where we had the longest kickstart push run ever. I pushed Max’s motorcycle more than five hundred meters down the road. I was so exhausted that I took a free BMW sidecar “taxi” back my motorcycle. Despite all the warnings I received about Russia, my gear was still on the motorcycle when we returned. Even if we were attracting too much attention sometimes, we have never really felt in danger.

The next seventy kilometers were the last ones. It was also the hardest track. I was driving sideways due to the strong wind coming from our right. Even Max had problems driving in a straight line. Every once in a while there were some wind stoppers on the side of the road. I guess this wind behavior is something usual in the area.

We arrived in Tashanta around seven o’clock. It wouldn’t be possible to cross to Mongolia until the next morning and all we had left to do was pitching the tent somewhere. It took us a while to get around the city until we found a spot far enough from it. We set our campground next to a bunch of separated rancher’s houses after politely asking for permission to camp side by side.

And so the day ended. That would be the last sunset we would see in Russia for a long time. Mongolia awaits.