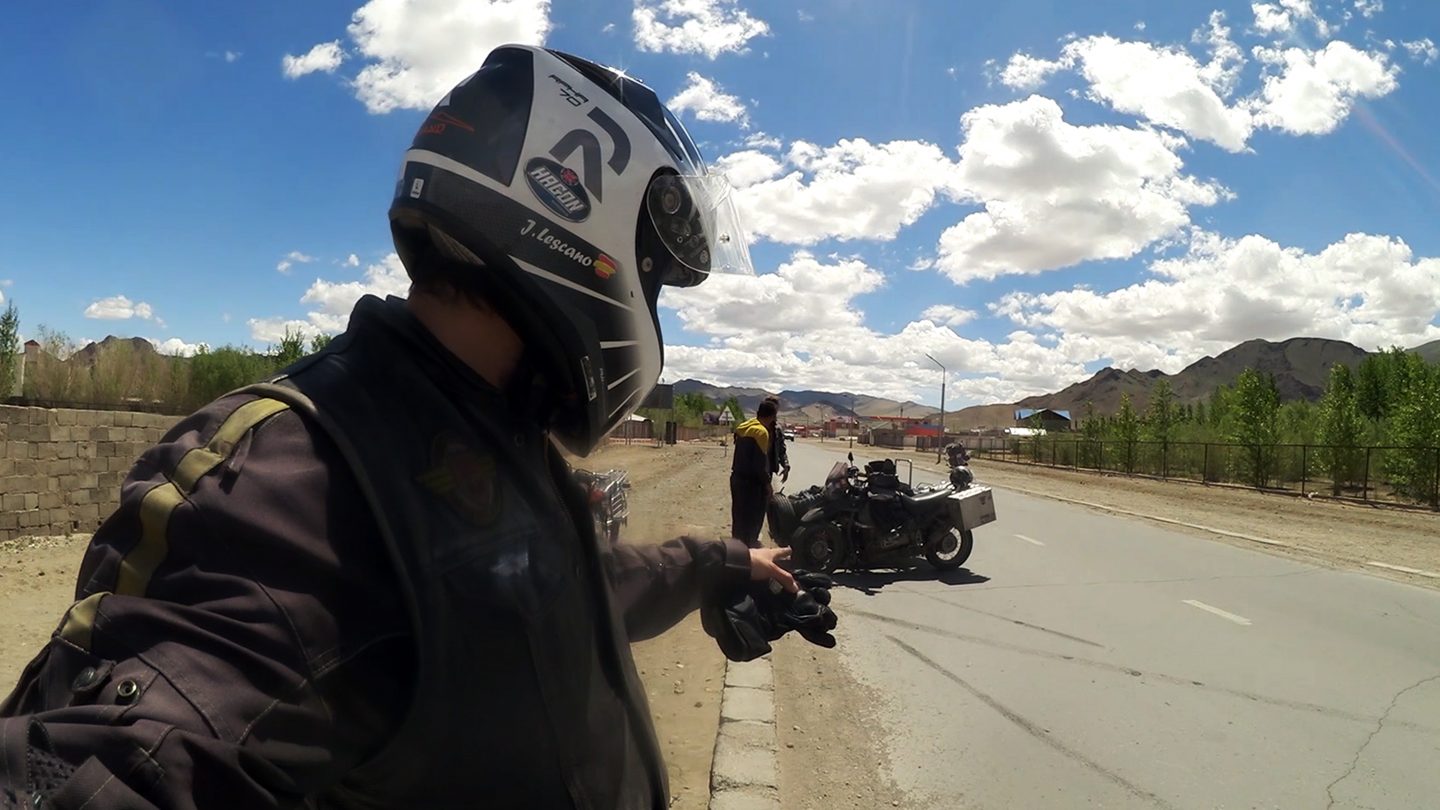 We woke up early in the morning in Tashanta. Skies were grey and the temperature went down during the night. We prepared our breakfast and got ready for the border crossing. People say this one could take a little while to cross.

We crossed the city using the main road and found a couple of bikers waiting. If you are driving from the west side of Altai, there is only one road that would take you here directly to the border control. These guys stopped the night before at the hotel placed in the city entrance. Probably the only hotel around.

After spending some time before the barrier, the called us to step forward and start our document validations. As I entered Russia back in August 2018, there was only one officer taking in the documents. Max and I stayed outside waiting for our turn. It was at that moment when I realized I could find myself in trouble.

When I left Kyrgyzstan to get to Tajikistan the officers took my motorcycle’s import documents. They explained to me that I was leaving some kind of old Russian Federations area which was still holding on together thanks to some countries’ agreements. My import papers were valid just until that moment. For some reason, when I got back into Kyrgyzstan no one asked me to fill in a new import voucher. Not even when I entered Russia again.

Now, I should leave Russia and I didn’t have that paper with me. What was I supposed to do? Suddenly, I realized a friend told me to take pictures of all the official documents as soon as they gave them to me. I took a picture of that paper before entering Kazakhstan just in case I had to fill in a similar one again in the future. Just to know what information to put. Even if it was translated into English, it was not really clear sometimes.

I asked Max to be the first one with the border officer while I tried to get that picture on my mobile phone. Thank God I had all the pictures of my trip uploaded on the cloud. The only problem was the telephone signal. I had to search for it in a folder with another two thousand pictures. Once found, I had to download it. Oh man, that took forever.

The picture wasn’t downloaded yet when my turn came. Max bought me some time with the officer trying to explain to her in Russian why I didn’t have the import document with me. Finally, the picture was on my phone and I handed it over to the officer. She started looking at it with distrust. After typing something on the computer and making some calls, we were ready to continue. At least, until the customs control ten meters ahead. We had two options there. We should open all our pieces of baggage in place or get them through an x-ray machine. The second one was easier and less problematic.

Two hours and twenty kilometers later, we were waiting at Mongolia’s border control. The other bikers stopped at the end of the line but came to the front once we passed by. By the time they come, Max and I had the document control passed and we were waiting before the barrier for no reason. While waiting, it started to hail. At least, after a couple of minutes, the officers had mercy on us and let us inside their cubicle.

The bikers came, filled in the forms, and got the stamps and papers required. After that, they joined us on our senseless waiting. The barrier officer held us there for a total of four hours. Every once in a while, when the barrier opened, we tried to get in. The answer was always the same: “no”. Also was our reply: “why?”.

In the meantime, someone crossed the border into Russian territory. Oh, my mistake. No man’s land territory. Russia is officially twenty kilometers farther. This man was the owner of a hotel in Ölgiy, the first medium-sized city on the way to the capital. He told us we would be waiting for a long time and that we wouldn’t make it into the city until nightfall. Therefore, he offered us to stay in his hotel with a fifty percent discount.

Indeed, it took us about six or seven hours to get into Mongolia. Just two hundred meters after stepping foot into the country, someone waved her hands at us and pointed to a sign on the side of the road. She was an insurance hunter.

The sign said insurance was mandatory. Not having one would be sufficient to send you to prison. The rest of the bikers stopped as well. Unfortunately, these ones were not too happy with the offer. Comparing the currencies, they yielded they were being cheated. After arguing for a couple of minutes, they left. If I’m not mistaken, they asked for eight hundred rubles, about twelve euros, per capita for two months’ insurance. We just paid and continued our way. A couple of kilometers later, the biker group was hiring the insurance on the side of the road.

The first taste of Mongolia was made of dust. Dirt roads led the way into the country. We found asphalt just a few kilometers before Tsagaannuur, the first village. Before the sun went down, we arrived in Ölgiy. I saw a big sculpture at the entrance and ask Max if we could take a picture there. All of a sudden, kids along the road started to pursue us. I waved my hands to them and smile, but my inner self was alert. I can understand we do look like “aliens” sometimes and that locals may not be familiarized with our motorcycles. Being followed is something I don’t like. Especially in a place I don’t know. Not even by kids.

We continued to the hotel which was not easy to find. My phone died before we set foot in the city. The name of the hotel was hidden somewhere inside our heads. We didn’t have a local sim card yet and the hotel we were looking for was the biggest in town. After circling the city a couple of times, we saw a building taller than the rest with a “hotel” sign on it. We decided to take it and, to our amazement, the biker group was there. It was our hotel.

Our room was two floors above the ground level. An excellent exercise after a long day. Not even the shower’s heater was on. After relaxing for an hour or so, we left for dinner. The hotel wasn’t too far from the main city’s square. It was late but there were a lot of people in the streets. As the shops were already closed, we looked for an ATM to withdraw some local currency and found a restaurant. Max’s Russian skills were useless. The menus weren’t legible and most of the locals didn’t speak the language. So, for our first night in Mongolia, we just picked from the menu with eyes shut.

We woke up the next morning around ten o’clock. The group of bikers offered us to join them on the road but they would be rushing too much compared to our schedule. Besides, destiny had other plans for us. We stopped at a petrol station and a grocery store before leaving. The wouldn’t be many cities or villages on the way. With Max’s sidecar full, we left. Just two kilometers farther, Max had an accident.

Max’s front shock absorber broke. The front fender pounced on the tire, cracking it along its entire length. The handlebar twisted to the left and force the motorcycle to cross to the other side of the road. Surprisingly, Max didn’t fall off. Fortunately, he didn’t hit another vehicle in between. The road was clear.

Two different persons stopped to help us. One looked like a wealth-being person. He stopped his luxurious car and offered his help. As Max was not injured, we thank him and took his contact number just in case. The second one was a man driving his moped. He knew a little bit of Russian and could ask Max what the problem was. The man, who happened to be half our age, told Max he could take him to a mechanic nearby. And so they left. I stayed with the motorcycles trying to get Max’s out of the road.

I managed to unblock the road using Max’s lifter in the shock absorber’s place. There was no other way to separate the fender from the tire. The man came back without Max and ask me to take the motorcycle to the mechanic. With signs, he made me understand Max was having lunch somewhere. As it was not possible to ride both motorcycles at the same time, he left again to fetch Max. I couldn’t let anybody else drive Max’s motorcycle. Especially not experienced bikers.

From the accident spot, we moved the motorcycles to a shop. With no shock absorbers to use as a replacement, we moved to the mechanic’s garage. Our new friend brought different kinds of shock absorbers trying to find a way to make them fit. Meanwhile, Max disassembled the broken one to keep the regulator with him. Then he went out again on the moped with his savior. After for hours, there was no solution at sight and it was time to move.

Rizabek, our new friend, took us to his house. Max had already been there. He had brought Max here to have lunch right after the accident. A mechanic master in town took the shock absorber. He would try to fix it and we would have to wait for him to come back until seven o’clock in the afternoon. Our host presented us with his family and took us for a walk around the city.

Back from the promenade, we found the mechanic master waiting. He had a replacement with him. After a few tries and amendments, it was obvious that we wouldn’t fix the shock absorber that day. A major correction was needed. We put all our hopes on this master mechanic, hoping he would come the next day with better news. In the meantime, we spend the night with our host family. At night, we were delighted with some traditional dances. Our savior’s brother was an awarded musician.

I woke up the next morning and saw Max was gone. Someone from the family told me he went to the mechanic master to look for the part he needed. By ten o’clock, we were testing it on the motorcycle. Unfortunately, the shock absorber was completely compressed just by taking out the lifter which held it together. That was not a good sign. Two hours later, the mechanic master came back with the same shock absorber. One thing was different. He had welded some screws at the bottom to sufficiently enlarge the fork and separate the fender from the tire.

Finally, they managed to temporarily fix the problem. Maybe “patched” would be the fitting word. Anyhow, we were back on the road after twenty-four hours.