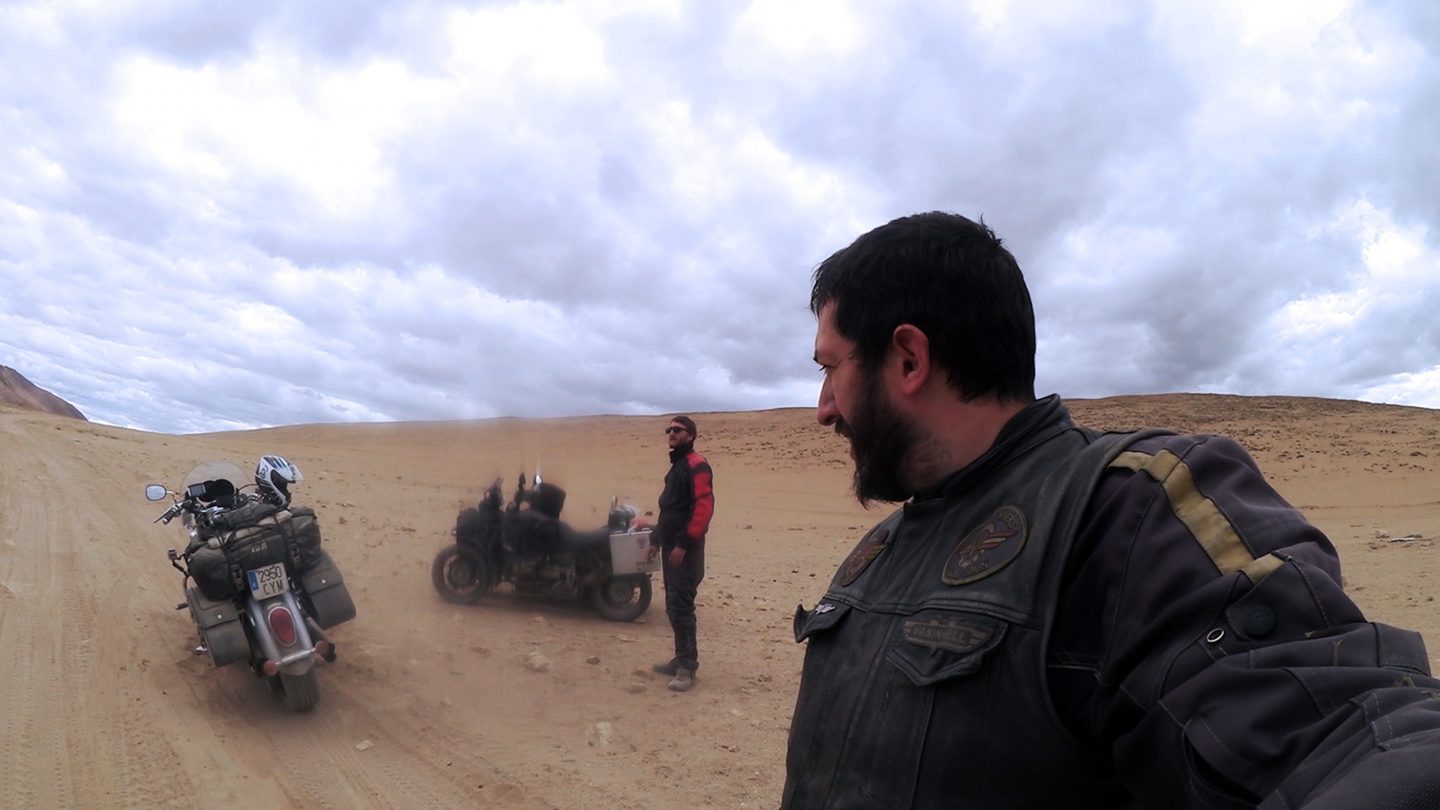 It was midday when the shock absorber replacement was in place. It was no longer overcharged with just the motorcycle weight. Our savior and his family did a great job helping us. Now it was time for us to leave.

We were already on asphalt. The locals predicted we would have it all the way to the capital. The Chinese are building the highway, they said. So we moved from Ölgiy﻿ to try to reach Altai that day. If the road was fine, it shouldn’t be a problem. Guess what, it wasn’t.

About sixty kilometers from the city we found the road blocked. No signs or indications at sight. Just a barrier made of dirt. Two roads began over the steppe, one on each side. Inevitably, the same recurrent question would arise in our heads. Should we take the right side because that’s our traffic flow sense? That didn’t matter too much. People here just drive wherever they want, however they want.

The steppe was sandy. Sand is tricky. Cars and trucks rushing around raising dust in the air as they pass by. Unfortunately, what we hoped to be just a few kilometers ended up being almost a hundred. The first kilometers on the steppe were challenging. Not so difficult to achieve dough. The second part was just sand. Max went easily through it. I was completely out of strength.

Driving through the sand was making me completely soaked on sweat. The amount of effort to keep it on track was devastating. I forced the tires to follow the carved rail car tires left behind. Obviously, I didn’t want to step out of them because the motorcycle’s behavior would turn unpredictable. The rear tire didn’t fit properly on the grooved sand making it difficult to drive over it. These grooves are “v” shaped while the car tire is “u” shaped.

Getting stuck in the sand was my biggest fear. I almost was. Once. I wanted to record a bit while riding on sand and I had to stop to turn on the camera. I was used to turning it on while driving on asphalt. This was way too different. The chances of falling off the motorcycle were high. As I stopped and tried to start again the rear tire went deep into the sand.

Fortunately, I could release myself effortlessly and reach Max a little bit farther ahead. We took a mandatory break after we got to more solid ground where there were some people working. From that point, we could see cars going over asphalt. The highway was right in front of us.

Like a dream, the highway ended too soon. We drove another eighty kilometers off the highway. We constantly crossed it from one side to another. Every access we found blocked on the way had the same sign: “men at work”. Surprisingly, none was at sight. From time to time we spotted heavy machinery. Always stopped and with no one around.

By seven o’clock we were out of that madness driving across the only mountains we would cross in several days. On both sides of the road, green grass covered half of the ground. A clean river flows alongside. We thought it was time to stop. We wouldn’t get much farther that day.

Finding and setting down our campsite was kind of tricky. The area was covered with stones and loose ground. After several tries, we managed to get near the river and settle down. As in Russia, cows and horses surrounded us pretty fast. We were exhausted. Bedtime didn’t take long to knock on us.

Although the weather was advising us to leave, we woke up late the next day. While having breakfast, clouds started to gather on the other side of the valley. The rain was upon us when we started to pack things back to the motorcycles. It followed us like a cat follows a fur stick. Once in the big steppes, there was no place to hide.

We arrived in Hovd under the rain. It was a good place to stop for lunch. Our plan was to reach Altai that day but yet we had several kilometers ahead. We jumped into a supermarket. It didn’t have just food and groceries, but house goods as well. In one of the prepared food fridges, we found lunch.

There was a petrol station near the city exit. Next to it, an abandoned one with a big shelter. Unfortunately for us, the worst came when we tasted our food. We thought it looked like some kind of pasta with vegetables. Not even close. In its place, it was a variety of local onion. And the sauce it has was pure vinegar and chilies. Needless to say, we couldn’t it much of it.

Back on the road, the weather went back to normal. Sun was shining and most of what was left to Altai was asphalt. We crossed the last hilly area not too far from the city. However, we wouldn’t know this for the time being.

Once in Altai, we stopped at the first hotel trying to get a standard room for both. It was early enough so we could walk around for a while. Instead, we spent about two hours looking for a place to stay. Suspiciously, the first two hotels, one in front of the other, only had the premium rooms available. Nevertheless, we kept looking. In the end, we found a small hotel at the bottom end of a small street a bit farther.

The sidewalk was wide enough for us to leave both motorcycles together near the hotel entrance. While taking things out, a couple from Denmark arrived with their bicycles. They suffered the same situation with the hotels for more than four hours. It was particularly hot at the time and I couldn’t imagine the effort of going around the city for so long. There were only two rooms left in the hotel which we were able to take.

Max and I spent the rest of the afternoon going around the city. One of the first things we visited was a temple at the city entrance. Not sure what the name is. The next thing Max helped me with was looking for some kind of super glue to fix the benzine canister. After visiting several shops, we couldn’t find any. Time to have dinner and return back to the hotel then.

The couple, however, stayed at the hotel because they were exhausted.