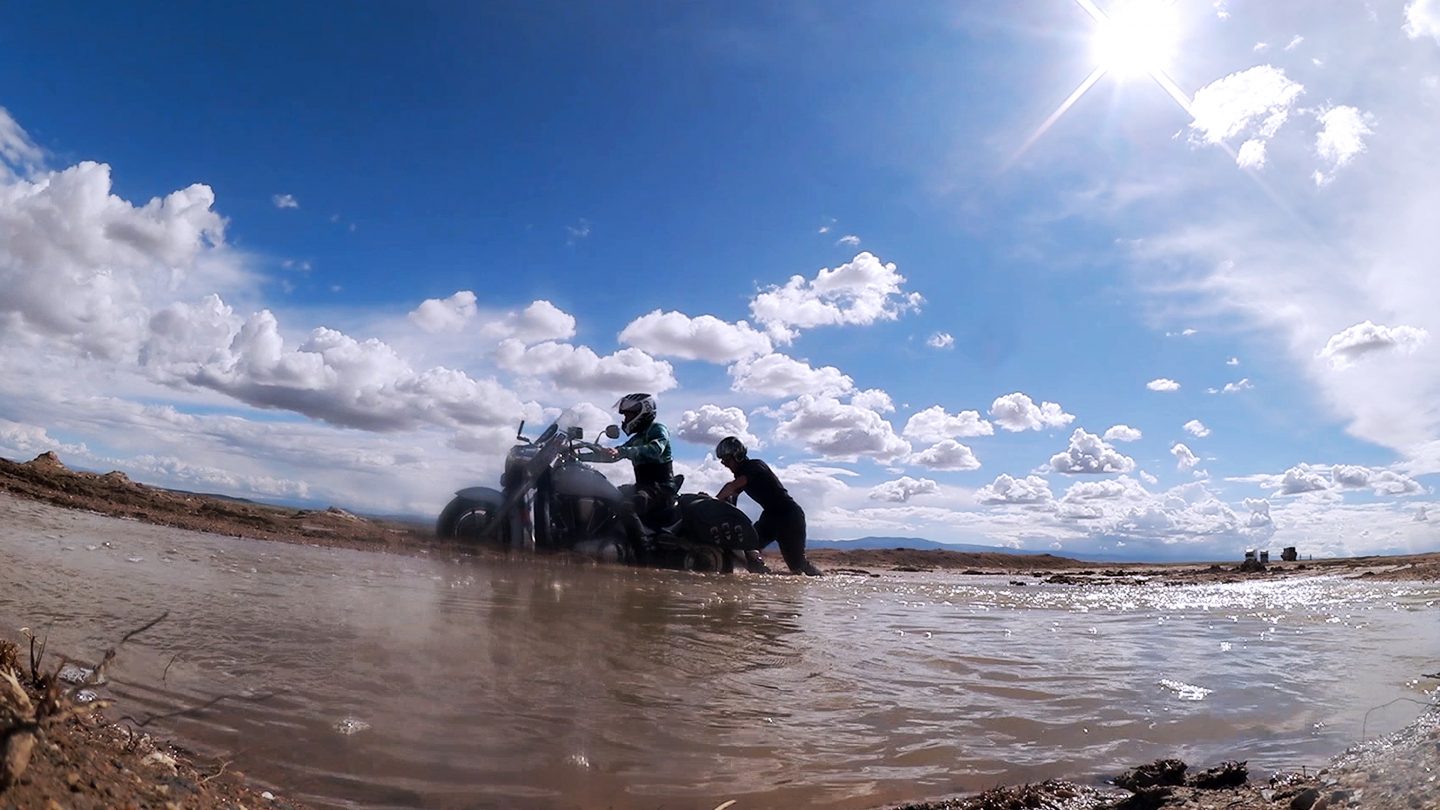 With Altai on our back, we continued east to Ulaanbaatar. We found a ceremonial cairn erected about two hundred meters on top of a high point on the right side of the road tight after leaving the city. Even if these were built as burial or landmark monuments in prehistoric times, they are most likely used as trail markers nowadays.

Asphalt kept us most of the time on the road until we reached the end of Delger’s Region. We left the road a couple of times as we found different collapsed bridges on the way. Who knows why. Even if there wasn’t a river, a small trace of water was still flowing underneath. In consequence, most of the ground was loose.

After the last bridge, we entered the largest area off-road. We did about a hundred and forty kilometers into Buutsagaan Region until we run into a flooded river.

The river itself was not too deep but the frequency of rains the center of Mongolia had in the last days helped many rivers to flood. This one was approximately four hundred meters wide. We could see several cars and trucks parked studying how to get across it.

Max and I drove a couple of kilometers to the sides trying to find a better place to cross. Unfortunately, the crossing area where the vehicles were was the only one in which the dept of the river was predictable. It was quite hot that day. Fortunately, the river flow wasn’t too strong at all.

Max wouldn’t have his chances of getting stuck easily. Therefore, he started dismantling the rear wheel to set a proper one for the situation. One of the many tires he had was a dirt one that was already mounted on the rim. I don’t have any tires or rims to change so I helped him. After an hour we were ready to give it a try.

As expected, Max crossed to the other side without effort. Seeing Max made me think I could do it myself. As the left side seemed more solid, I decided to drive as close as possible to it to the first muddy water cross. I was doing well until I turned right to reach a higher ground to cross. Inevitably, the front wheel blocked itself while straightening and the rear one started sliding. The motorcycle’s frame ended up on the hard ground. Now the rear wheel was in the air.

Max came back from the other side to help. Fortunately, there were some sticks nearby that Max used to lower the ground beneath the motorcycle. The ground beneath it was too hard. It took us about twenty minutes to get the motorcycle out of there while the rest of the vehicles passed by without offering any help. We surely were alone in that mess.

Out of the first obstacle, the rest was not better. There still was two more water cross with a lot of mud in between. It was quite difficult to visually guess the dept of the loose ground. Sometimes it was as deep as the boot sole. Most of the time the whole boot would end up in it.

Another two hard hours passed before reaching the last obstacle. This time, Max’s efforts pushing the motorcycle weren’t enough to counter the rear wheel sliding. Happily, two locals stepped out of a car and walked towards us. With a guy pulling from each one of the engine guards and another one pushing from behind was now enough to get out of that madness.

We finally took a deserved rest on the other side. A truck driver was still waiting there. It’s been three hours and he didn’t move yet. Probably, he was not so adventurous as the ones that passed before him. Maybe he was just waiting for the right time. We asked him about the road ahead, the one he came from. With a few words, we could understand he was telling us “the road is good”. It took us less than three kilometers to find ourselves again in two different flooded areas.

I got stuck a couple of times. Fortunately, the previous experience and the relatively minor difficulty made it easier to go through. Due to the water level, our boots were soaked. I had a pair of shoes that I put on and left the boots drying in the back. We drove for another forty kilometers before we found a couple of yurts aside the road. It was hot but our footwear wasn’t drying at all. They had too much water.

We were exhausted and the road was too stressful Seeing the yurts caught our attention. It was still early but all the effort we spent back in the river was taking its toll. We decided it was better to stop for the day.

As we were getting close to the yurts a couple of kids came out of them. One of them hardly knew a few words in English and none in Russian. We managed to ask if it was possible to pitch the tents nearby. It seemed other people did the same as well. There was a barrel that has been used for fire during the night. They made no objections. When asking them for something to drink, the kids took us to one of the yurts and we realized that one was some kind of small road shop. They had several drinks stacked one over the other. No alcohol though.

At night, two busses stopped at the yurts. It was not only a drink shop. These people lived from making meals and selling drinks to the passengers. I was surely not expecting to see that.