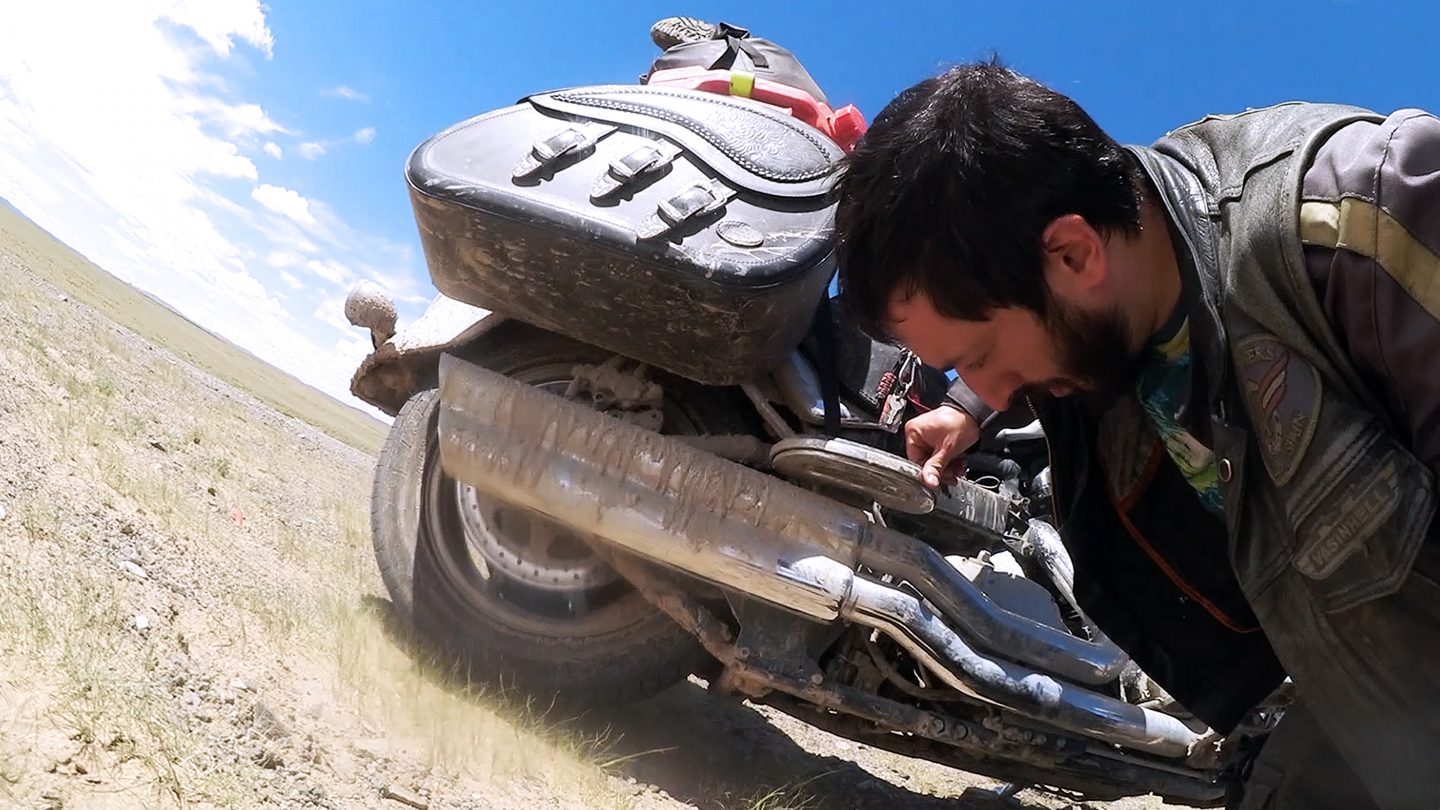 There are some days with a lot of things happening. Days that keep you up in the mood and full of energy. Days that simply take out the best of you. And then there is this day.

We woke up and prepared breakfast at around ten o’clock. Usually, that is the hour we would be preparing to leave. The day before was quite exhausting. At least we were happy about surpassing the river obstacle without mayor problems.

With all packed, we continued. We were in the middle of nowhere and that is what we would see all day long. The weather was perfect. The sun was shining, the sky was clear, and it wasn’t too hot to ride. There was just nothing to see.

Driving across Mongolia leads you to wide areas full of grass delimited by several road trails with no order at all. Trucks seem to drive far away from the so-called “main” road while the rest of vehicles make a new trail every time. We followed the marks on the ground hoping they would lead us to the place we wanted to go.

However, sometimes it was easier to drive over the grass instead. The constant passing of cars transformed the flat surface of Mongolia in a washing board that makes me think about a disastrous end to the motorcycle’s lifetime. The worst part was yet to come.

Around one-thirty, I had the feeling something was not right. Hollow memories filled my mind as I noticed the motorcycle was bouncing too much. I stopped fearing the worst could have happened. Unfortunately, it did. The rear shock absorber was leaking oil. It was no longer working.

I had this same problem last year but I didn’t realize about the origin until the drive belt broke. Now, I would have to drive with a broken shock off-road. I was overwhelmed. I didn’t want to risk having a major breakdown and Max offered to drive with my luggage on his motorcycle.

We were not sure where we were or how far the asphalt was from our location. I could only expect to drive carefully to the next safe point. Fortunately, just eight kilometers farther we arrived in Buutsagaan, the only village we would find until reaching Bayanhongor.

We spent about two hours there. Meanwhile, I called Babu. A contact I had in Ulaanbaatar, to help me understand how far we were from asphalt. Obviously, I gave the phone to the lady working in the only gas station in the region. Although it was a short ride, fifty more kilometers could be disastrous. Max went to a local shop to get something to eat while I quickly contacted the shock absorber dealer to work on a solution as fast as possible.

Fortunately, the six hours time zone difference was an advantage. The office in Spain was not yet opened and we could ride the rest of the day waiting for an answer. The only problem was this happened on Sunday.

We made forty of the fifty kilometers towards the asphalted road before resting again. It took us two hours so you can imagine I couldn’t drive too fast. Any excess on the throttle and the journey would have come to an end. While resting, we spotted a vertical black line on the horizon. The asphalt was on sight.

Comparatively, the last ten kilometers were as bad as the previous forty. Even worse sometimes as trucks made their appearance. The last leg was made of traces of asphalt mixed with stones. This didn’t help much either. In the end, we arrived at a small resting area. Something similar to a tiny village made of a group of yurts on the back and a couple of small shops built on the front.

Our first attempt was to get a room. Unfortunately, the one we were offered had a table bed an no toilet. The lack of private toilets drives me crazy sometimes. Obviously, I can’t expect to find a room with a shower. That is very difficult to find even in bigger cities. Besides, having a mattress and a tent will prevent us from sleeping in a table bed. A table bed is a thin mattress over a wooden table by the way. Very common in these countries.

In this journey, I understood services are not available everywhere and I learn how to deal with it. However, when I find a brand new petrol station with shiny floors and lightful sign I can’t understand why there isn’t a toilet in it. And I’m not talking about a lost station in the middle of the desert. No, I’m referring to brand new stations in a city.

We left the resting area and pitched the tents a couple of hundred meters down the road and went back for dinner. Hence, our first option was to order a meal. Unfortunately, Max wanted to avoid lamb. Every time we ask people about food without meat they look back with a strange grin. The Mongolian food is strongly based in lamb.

As the restaurant option went wrong, the second choice was to buy something in the grocery shop and cook it back in the camp. Fortunately, we got some water from the shop. We haven’t seen much water on the road and the one we had that night in the river was completely dirty.