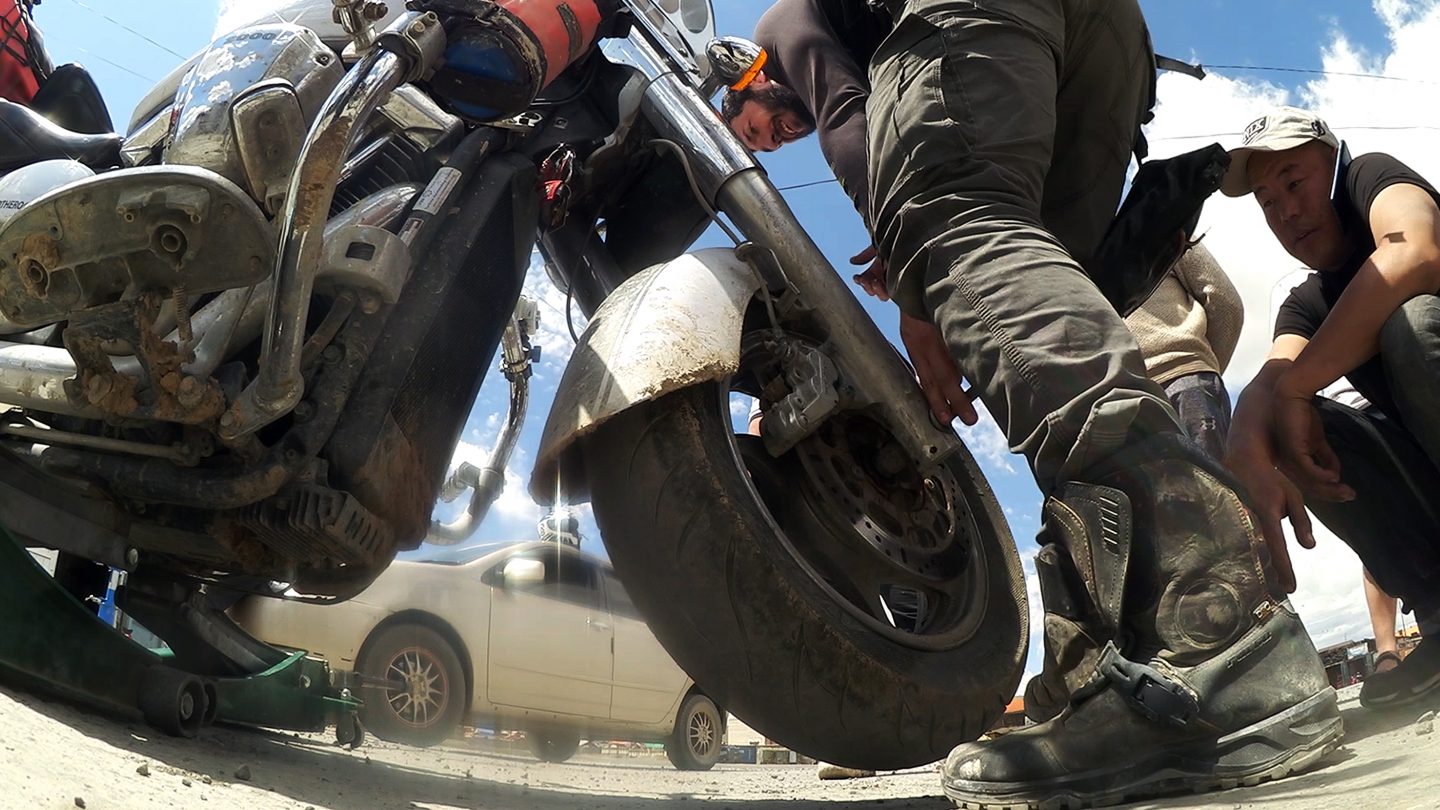 I was surely not expecting to receive the most unexpected drink for breakfast in Bayan-Baidrag. We had the motorcycles packed and the breakfast was almost ready. A guy on his horse appeared from the South. He passed by and continued to the resting area. A couple of minutes later he was on his way back home with a bottle of vodka under his coat.

He turned around and made a pause when he arrived to our campground. Even though we tried to excuse ourselves, the man was so insistent that we accepted a morning shot. With this small extra burst, we were ready to go by ten o’clock.

The asphalt was right in front of us. Just on the other side of the bridge over the brown colored river aside from our camp. It was nice to drive over it for a while.
The road was brand new in this area and it was delightful to feel the smoothness under the tires.

Although we found ourselves crossing a small off-road track, we spend most of the first three hours driving at an average speed of ninety kilometers per hour. A pretty good speed considering Max has a poor shock absorber replacement and mine was broken.

Out of Bayanhongor, we arrived at the first toll control post we would find on the way. The ticket was worth a thousand Tugrik for motorcycles (about thirty centsof Euro). On the signs, it was written the toll was for nature and pollution purposes. Obviously, it wasn’t to afford the road maintenance as asphalt disappeared for a bunch of meters later. Right after the toll control.

Passed Bayanhongor, we arrived in Ulziit. It was lunchtime and we were running low on food assortment. Inside the supermarket, the first thing that caught our attention was a big canvas covering the beer shelves. However, we didn’t know the real meaning behind it.

One of the things that we found on the shelves was a popular candy from Argentina. What were the odds of finding them here and at such a low price in comparison? Bonobon is a crispy wafer nut filled with peanut butter and covered with chocolate. We choose the dark chocolate option before turning around and face the alcohol shelves. Max wanted a couple of beers and we decided we could also get a bottle of distillate to celebrate our arrival to the capital.

As we were staring at the shelves, one of the supermarket workers told us: “no whiskey”. However, the canvas was only hiding the beers. If whiskey was not an option, then we should better look at the other bottles. After five minutes the worker came back and told us no alcohol was available for us today. It happened to be “dry Wednesday “.

People told us the Government decreed alcohol can’t be sold on the first day of the month in the whole country. It seems that regions have some additional regulations as well. Here, on a weekly basis, it not possible to buy it on Wednesday. However, they sold us a bottle while nobody was watching. Being travelers and having an opportunity to make some more money made them offer us to have it anyways.

We didn’t reach Arvaikheer until seven o’clock in the afternoon. A pretty good distance covered due to the asphalt quality after Ulziit. On the way there was one thing that caught our attention a couple of kilometers before our arrival. It looked like a mausoleum from the road. Something like the one I run into with Evgeniya in Kazakhstan last year. It wasn’t.

The purpose of the monument was to tribute the greatest horses on Mongolian history. There were nNineteen different sculptures placed aside of the main path leading to a Buda statue. Each one of them with the name of the horse and a small description of its achievements. All painted and modeled to simulate their breed.

Once in Arvaikheer, we searched for a place to stay. I can’t recall if we stayed in the first place we found. It has been a long day and we didn’t seem to have many other options. The hotel had two floors. The first one had the laundry, and shower room plus the owner’s house. Needless to say, the shower wasn’t working.

Fortunately, the hotel has a backyard where our motorcycles could stay overnight without calling unwanted attention. The hotel was the first one we found with separate bedrooms which were marked as a luxury. To end the day, we went out for dinner and found what we think was the most luxurious restaurant in the city. Something between a pizzeria and a Japanese restaurant.

Anyhow, that pizza was delicious.

I woke up the next morning with an email from the shock absorber supplier asking me for some measurements. They wanted to send me a replacement making sure I wouldn’t need to manipulate it. Just plug and play. The weather was warm and if the road was good we could get to Ulaanbaatar that evening. We were only four hundred forty kilometers away from our destination.

With the measures taken, it was time to go. Unfortunately, destiny had different plans for us that day. About twenty kilometers later, I started hearing some strange noises coming from the front-rear. Our little adventure back at the river crossing in Buutsagaan had both tires underwater for a long period of time. Because of that, the front wheel bearings broke.

The next big city was Ulaanbaatar. That is something you can guess in Mongolia as there are no signs of the kilometric point you are at. Just the distance to the next big cities in both directions. That forced me to turn around back to Arvaikheer to find a replacement.

Our first stop was the toll control before the city. The officers gave us the very first hint. After asking them, they marked on the map the situation of a spare parts shop. Unfortunately, the shop didn’t have any of the bearings I needed and I started to panic. Luckily, I managed to ask for a different place to go to.

The new destination was a set of containers in the form of a vehicle parts street market. A bunch of people came to meet us when we arrived. They were curious about the motorcycles. Using the phone translator, I manage to make them understand my needs. In no time, a man brought his lifter and I borrowed one from another shop. As I was walking, I could notice the whole market had mainly car parts. Even so, they found the way to pull out the wheel axle. The bearings were completely broken. As they were not sealed, the water that was accumulated inside had begun to come out as rust.

Our savior took the bearings out and the first thing he said was: “we don’t sell these”. That sentence blew away my mind. Those bearings are one of the most common ones for big motorcycles. Right, there are not many of them here. The motorcycle had the front wheel with the bearings out and there was no replacement for them. That’s it, there was no place to go now. Nevertheless, our new friend told us to wait while he tries to find a solution.

Meanwhile, I called Mark. He is an English traveler who was in Ulaanbaatar planing to come towards us that day. He offered us to get the replacements at the capital and deliver them to us in Arvaikheer. We were not sure he would make it during the day so we waited for our friend to come back first. Fortunately, after an hour and a half Shinebayr found the parts we needed and assembled the motorcycle.

It was quite late when we went back on the track. Now the road was completely made of asphalt. Unfortunately, it was not brand new. I couldn’t drive faster than fifty kilometers an hour sometimes due to the wavy surface that kept me bouncing all the way. When arriving in Ulaanshiveet, I saw a biker couple having lunch aside from the road.

We stopped fifty kilometers later in Erdernesant. While we were resting, Sergey and Kristina arrived. They were traveling from Kazakhstan to Ulaanbaatar on their BMW GS with a small self-built trailer. We get to know each other a bit and decided to travel together up to the capital.

The asphalt took us to Lun, the last off-road part we had before arriving. Babu, my contact in Ulaanbaatar, had already advised me about it. That part of the road was under construction and people were forced to detour for about twenty kilometers. During that time, we were rushing straight forward across the land. The traffic was using the proper detour made by the road workers. Cars and buses seemed to be racing to get to the finish line as fast as possible leaving enormous clouds of dirt behind them.

We arrived in Ulaanbaatar by nightfall. Both Babu and Bayarkhüü were waiting for us at a petrol station. It was already too late and I couldn’t contact Mark. He was surely asleep by then. The two Mongolian bikers escorted us to the hotel were Mark was spending the night. Unfortunately, there was no more room left. However, our friends found us another reasonably priced hotel nearby.

After taking everything up to the rooms, we went out for dinner. At the restaurant, just a hundred meters from the hotel, we tasted one of the most typical dishes in Mongolia: Tsuivan.

We finally felt like the insane adventure was over. Now it was time to tune the motorcycles back to shape.