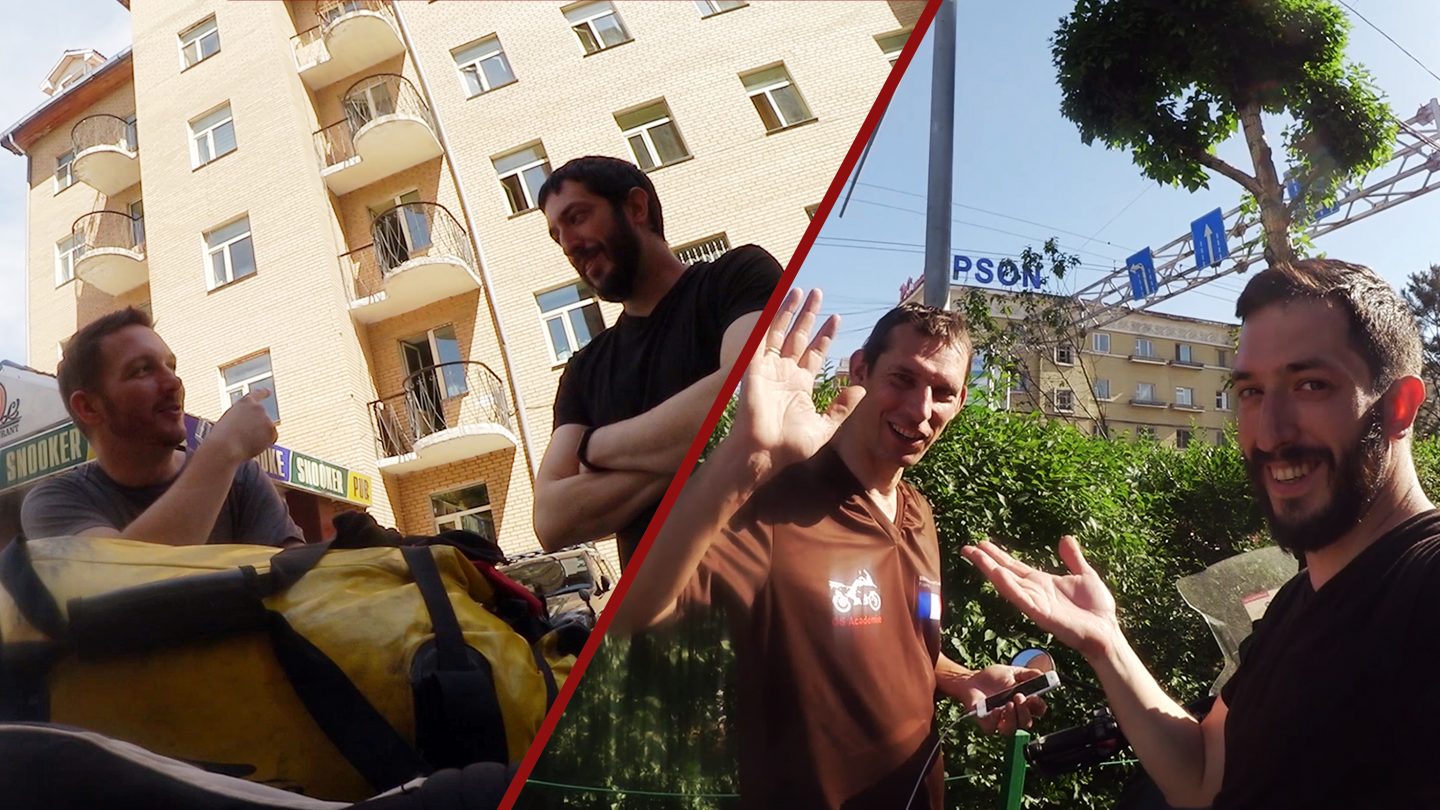 Nothing feels better than knowing things will be sorted out. Somehow, that is what Max and I felt as we arrived on Ulaanbaatar.

The first thing I did in the morning was waiting for Mark to contact me back. The night before we arrived so late that we couldn’t book a room at the same hotel he was staying in. Instead, we were a couple of blocks north from it.

I didn’t rest much that night and I woke up early. Mark stayed in the city so we could finally meet. He was leaving that day and drove to our hotel prior to continuing his journey. We chatted at the entrance waiting for Max to come out.

I was curious about what happened to Mark the year before. He started his round the world journey in 2018, just like me. Unfortunately, things went wrong a couple of times and he had to end it in Ulaanbaatar after expending his Visa twice in a row. The parts were taking too much time and he finally decided to take the motorcycle back home. His goal was, and still is, to achieve his journey in one go. No breaks allowed.

I often had the same thought. However, I know that having the motorcycle going back and forth around the world would increase the costs of my trip exponentially. I would rather prefer to move to Spain with my motorcycle in the meantime but I have to adapt to those break periods.

Max joined us later while I was showing to Mark the group of motorcycles I drove with the last two hundred kilometers. Max’s with a sidecar and Sergey’s with a small trailer. Both BMW GS models. After exchanging some of the adversities we suffered on the road, Mark left the city. He was short on time due to his visa but decided to stay one more night in the city. However, he would spent most of the day away visiting Genghis Khan memorial.

In the meantime, Max and I walked around the southern quadrant of Ulaanbaatar. It was our first day in the city and there wasn’t a particular thing we would like to visit. We decided to wander around finding things on our way. The weather was getting warmer day by day. However, it always feels hotter in the city with all those floor tiles reflecting the heat back to you.

Max went out with the motorcycle jacket on and I was walking with the boots on. Fortunately, we found a large sprinkle fountain were kids were playing and I got the change to refresh myself. In the same square we run into a sculpture I would have never expect to find here: a tribute to “The Beatles”.

We met Mark again for dinner. He was now staying at a different hotel located about seven kilometers from ours. As we got short on time, we decided to walk part of the distance while he moved by taxi.

The traffic was horrendous. While we were waiting for Mark we discovered a particular transportation service in the capital. Quite a few cars picked random people to help them get farther down the street. Even some others stopped and asked us if we would like a lift. I figured this was some nonprofit service as we kept seeing this the next days but I’m not exactly sure how this works. After visiting different restaurant options that we found closed that day we ended up having dinner at a Chinese near the city center.

We were hungry. Unfortunately, I had to order three times until they told me the dishes I asked for were available. They took some time to let me know about it. However, we didn’t run out of food. We ordered the plates thinking they would be reasonable. Far from that, they had much more food than expected.

Mark didn’t have much more time to spend because he was leaving early the next morning. Additionally, we were exhausted after our first day of tourism so we farewell to each other. Hopefully, we would meet again somewhere in the future.

On Thursday I went to an SLS shop to get a new set of bearings. Buba, one of my contacts in town, works closely with this company and gave me the address and phone number to contact them. Although it wasn’t too far from our hotel, the address description was very tricky. After half an hour, I decided to call them so the purchase could be done. Fortunately, the contact I was given spoke English, and finding the spare parts was not a problem.

Later on, I visited a barber in the afternoon following Mark’s recommendation. After showing a picture of the desired haircut, I came out of the shop with something far from what I asked for. In addition, they didn’t cut my beard. I’m not quite sure if I visited the right shop or if I just took for granted they would do it. However, I must say I wear that same haircut now.

On Friday we took the morning off. Max spotted a group of temples not too far from the hotel that could be very interesting to visit. He left first as I was trying to catch up with the videos on the computer. I met him later after and I realized the temple was closed until four o’clock. Fortunately, he found another tourist who he spent the time with until the temple opening. The group of temples was actually a Buddhist university. Visiting the complex was for free except for the main one. Buying a ticket was required and you were asked to specify the purpose of your visit: sightseeing with or without taking pictures.

After visiting the last one I went back to the hotel taking the longest walk. I wanted to visit the main shopping mall before leaving the city the next morning. Things like a portable solar panel were hanging around my head. While arriving, I saw a BMW GS with a French plate number parked on the sidewalk. I stopped to take a look at it trying to find something that could give me a hint on who’s motorcycle was. A couple of minutes later, Romuald came out of a telephone shop next to me.

Romuald is a Frenchman who decided to travel to Ulaanbaatar and back from Paris. He arrived in town the day before and he is expecting his family the next day. As it was nice to find another traveler around we exchanged our phone numbers and scheduled to meet again in the evening to have dinner together.

Our meeting point was The Blue Sky Hotel, a big tower in front of the main square with a restaurant on the top. Max joined us as well as it would be our last night in the city center. Tomorrow we would be leaving fifteen kilometers North to Koji’s garage.

The restaurant prices were a bit high compared to the dishes dimensions. They even charge you for the service. Isn’t that wonderful? Fortunately, we scheduled dinner early enough and we could watch the sunset from the hotel penthouse as a singer enlivened the evening. The traffic chaos was a spectacle from that height.

However, among the experiences lived in the city I will always recall entering the ladies’ toilet to see the city views from this hotel.

Before you judge me, I have to say the toilets doors were wide open. We saw an arrow indicating where the toilets were but we didn’t see the sign on the door as it was opened. The views were visible from the corridor and hypnotized us through. There was no one in it but after a few minutes, the hotel personnel came to tell us we were in the wrong room.